Login to add items to your list, keep track of your progress, and rate series!
Description
When Ryuu Kagaya tries to befriend the boy in the next seat to his, honor student Yoshito Naruse, he's shot down. Only after Yoshito visits Ryuu's workplace does he think they might be friends. But Yoshito's brother might have something to say about that... 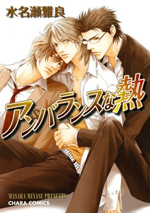 
Category Recommendations
Be a Eunuch's Wife to Control the World
Seishokusha.
Kanou-san Chi no Shouwaru Futago
The Husky and His White Cat Shizun (Novel)
Tsurugi-san no Meirei wa Zetsu! Tai!!

Absolute trash
by leann123
June 16th, 2017, 11:39am
Rating: 1.0  / 10.0
Spoiler (mouse over to view)
The fact the main guy ends up with his rapist is beyond reason. The rapist brother was a goddamn piece of shit. He blamed his brother for his mother's death, but the brother has nothing to do with it. He caused the brother's girlfriend to cheat on him, and then spread about that the brother raped the girlfriend. He then gets all pitiful and the main guy falls for him. Disgusting shit right there. The main guy is an awful person who hated the guy who raped him and was basically guilted into being with him.
Was this comment useful?  Yes

Sighs, Minase Masara's works ...
by Yankee-chan
October 14th, 2013, 10:22am
Rating: 6.5  / 10.0
... They just don't get on my good side. It's not the drawing style, that makes me hesitate or pay them any special attention. Although the characters look similar in her works and come off with similar personalities, it's not a style that is considered to be bad by me. It's clean - and kind of average, in it's own way unique and old school.

No - It's rather the storyline, which makes me raise an eyebrow or makes me grin. Serious topics, like rape or drugs, are lightly mixed up with some drama, where you wouldn't expect it. There are other comments here, which already picked those things up and so I will keep mine short this time. If you don't take the setting too serious and if you can overlook a few weaknesses, then this isn't a bad read. It will help to spend some time and maybe even can make you smile by times, so just see for yourself. Lol.
Was this comment useful?  Yes

All the ukes are the exact same person
by ko-miko
April 25th, 2013, 6:20am
Rating: N/A
I'm taking this out on this manga specifically as its the 4th I've read by the mangaka, but seriously at least change the hair style or hair colour of the uke... Gokujou no Koibito, Uso to Kiss, and especially Toiki Yori mo Yasashii all have the exact same uke... boring!
Was this comment useful?  Yes

The problem I usually have with rape scenarios is that it's justified with how much the seme supposedly loves the uke like he just couldn't contain his passions any longer or some such nonsense. Well, if he loves the uke so much, how can he betray his trust by violating his body? You don't rape someone out of love for them!

In this story, Shinya only falls in love with Ryuu after what happened and apologizes for what he did, being patient and considerate of Ryuu's feelings from that point on. Does it make his actions okay? Well, no. Still, he doesn't come across as a bad guy to me, just a very angry, misquided, and self-centered young man. And after Ryuu knocked some things in perspective for him, I felt he redeemed himself.

What irked me more was Ryuu's reaction to being raped and the way the trope was haddled in general.
Spoiler (mouse over to view)
Like when they find out Shinya didn't sexually assault that girl, and Yoshito is like "I was wrong about him," did they forget that, even if he'd been innocent before, Shinya did in fact drug and rape Ryuu?
And Ryuu's too flippant about it for it to be in any way realistic. Still, I liked it how he could stand up for himself and that he really didn't seem like your average weak willed uke. But no matter how strong you are, being upset about getting raped is normal.

I'd recommend this to folks looking for something a bit different with a reminder to keep an open mind and not let your expectations ruin it for you...

pretty bad
by Dagorkitty
March 24th, 2013, 11:12am
Rating: N/A
Ok, so, I had read the reviews so I was prepared to find a horrible story, so by being prepared I guess it wasnt so shocking how bad it was. If i had read the story expecting it to be good i would have had a huge letdown.

I couldn't empathize with any of the characters with maybe the exception of yoshito and only a little bit. I completely hated the seme, he had no real development through the story, just fell in love, but didn't seem to regret what he'd done to his brother, which was not yoshito's fault, it was the parents fault. It felt like when a kid is pacified with a toy or candy, he didn't learn anything. The feeling the uke had for the seme felt like nothing more than pity and to some degree stockholm syndrome.

So, all in all, pretty disapointing work coming from MINASE Masara, just a shame. From the comments I've read there are a few people that have liked the story, so I guess it's someone's taste in plot. I guess you have to come to like "the bad guy" which isn't too smart either, though to be fair, there are alot of manga involving rape-turn-love that don't get all this bad reputation, i guess it was the bad execution of the mangaka or maybe her being brave enough to not turn it into something good.
Was this comment useful?  Yes

Get over it - this work is pretty good!
by Namiya
September 26th, 2012, 12:45pm
Rating: 9.0  / 10.0
This is one of those big names that often come up in the yaoi scene so I finally got the chance to read it myself....
I was a little scared by all the bad reviews and the whole rape and Stockholm syndrome tags....
but I gotta say, that wasn't as bad as I expected it and I actually liked the story a whole lot!
The rape scene isn't a cruel disgusting one (it's kinda hot) and yes yes, looking at it realistically no rape should ever be forgiven and all that, I agree.
But since this is manga and if it helps the story I like rape in manga, I liked it here too.
The situation between the characters is quite interesting and while Shinya deals with his hate for his brother in a very overreacting and insane way, it's sort of understandable if he wants to hit his brother where it hurts most: his relationships. I've read a lot of stories where a guy ruins another's relationships to hurt him, and it's often an entertaining part of the story!
Ryuu being caught in between both brothers, in reality he should keep away from both of them but I liked reading on and finding out who he went for in the end...
The only thing I can criticise is the story being rushed, Ryuu giving in too quick. I'd prefer the be more drama, struggle, fighting... especially with the situation between the brothers.
Other than that though, I really liked this manga!

I'd recommend this to anyone who can get over a "falling in love with the rapist" kind of story because if you don't freak out over this detail, the story is really worth reading!
Was this comment useful?  Yes

Can't care for this one
by Feaquis
April 29th, 2012, 3:39pm
Rating: 3.5  / 10.0
While I don't mind the rape this one was really weird manga. Seme aside from being a rapist is total twat I just can't like. Especially with the other brother being quite cool. (Ending is like WTF? Why Minase, why did you do this?)
Was this comment useful?  Yes

After a re-read
by blueseeker
January 6th, 2012, 7:08pm
Rating: 5.0  / 10.0
I still really don't like how things ended in this story. Neglect does not equal excuse for rape, especially when done out of pure malice. I can usually let it slide on yaoiland, because many of the ukes are not honest when they really want to be together with the person, but in this case it's clearly rape.

Terrible
by LAPokute
December 22nd, 2011, 2:00am
Rating: 1.0  / 10.0
Great Art. Beautiful art, actually, but this is literally the worst I have ever read.
I can't even give the art a good rating because the plot was just that awful.

Spoiler (mouse over to view)
:
I personally take no interest in any story that involves rape transforming into a consensual relationship. Unless you have a rape-fetish, I don't suggest it. It almost makes me sick how rape becomes a trendy theme, and this one takes it to an entirely different level. Not only is the main character falling in love with someone who brutally raped and humiliated him, but he's turning down someone who wanted to protect him, someone he already loved in order to get together with his rapist. Really?
And to make it worse, there is no romantic connection whatsoever between rapist and rape-ee. The main character takes pity on his stalking, whining, desperate and sorry rapist, making it so there is absolutely no chemistry between the two. Seconds after the main character admits never being able to forgive the rapist, he agrees to be the rapist's lover after the guy starts to sob and whine about hating the world.
I feel tricked reading this. This 'surprise' ending was just a waste of my time.
Was this comment useful?  Yes