Login to add items to your list, keep track of your progress, and rate series!
Description
From Chibi Manga:

5 years ago, Shin was Yumika's private tutor. Now this Shin-kun comes to Yumika's high school as a teacher trainee! But their love from 5 years ago will most probably start to bloom again?!

Yumika’s first love was her tutor Shin. As she hope to meet Shin once again, which really happens, how will Yumika proceed on to confess to Shin about her feelings… 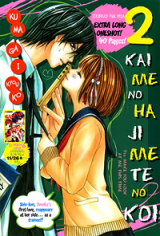 Thank goodness it is only a one shot
by Utsukushii Yume
September 28th, 2015, 9:58pm
Rating: 4.0  / 10.0
So the protagonist feels that if she can't get the guy she wants, it doesn't matter who she hooks up with, or makes out with. I usually prefer heroines who have some sort of moral compass, or at least have some respect for their own bodies. She doesn't really seem to have that going for her, she sort of has "I am easy, come get me boys" sort of feel.

In my opinion, characters like her do better in a psychological manga which shows the mental and emotional struggle of people who just let any man/woman have their way with them. Her character in a fluffy Shoujo like this doesn't really fit well, as it left me feeling that every time she and her boyfriend argue, she is going to be THAT girl who runs off with another guy just to get back at her boyfriend.

The boyfriend to me (keeping in mind this is a one shot), doesn't get much (any) personality attached to him. The story introduces the idea that something may have happened during his college years, but there is no time to entertain the idea. You are left not knowing why he is interested, or at the very least why he might be interested in the girl. I couldn't help but wonder if an old college relationship fared badly and he decided to use the girl as a rebound since she is young, stupid, and easy.

Overall, I was happy it was a one shot because based on how the characters were portrayed, I was left with a deep feeling that I would find the female unbearably annoying.
Was this comment useful?  Yes

hmm
by lily_kitty15
May 9th, 2013, 1:01am
Rating: 6.0  / 10.0
it was so-so the 2nd person that posted about the age gap will 5-6 year is understandable over 6 too much, cuz usually a new teacher or trainee is usually always 22 years old so since our main female Yumika Miyano says that he might be in his 4th year of collage then thats makes it perfect for him to be 22 from guessing he started collage at 19 and Yumika Miyano being 16 year old so 6 year gap not bad...

Okay
by twelveball
March 18th, 2013, 4:06am
Rating: 6.0  / 10.0
It's just a short one-shot so you can't expect anything too complicated for the plot. The story is somewhat cute and a little cheesy. Yumika Miyano (the female protagonist) was a bit too emotional for my tastes. She also looks a bit kawaii kidish but Shin (her older crush) could pass as a high school student so it balances out. I'm not really certain how wide the age gap is, but I like to pretend it's no more than 6-10 years.

It just, too short and too fast. I almost do not understand what happen and why the main character's love can be requited. But, not bad!
Was this comment useful?  Yes