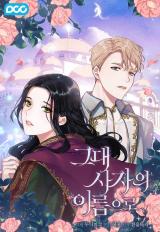 Very Good
by RAGApeace
March 17th, 2022, 11:51pm
Rating: 10.0  / 10.0
But this series is probably the type that's better to binge-read after a lot of chapters are available to read bc of how complex the plots/mysteries are and how slowly everything gets revealed. The setting is a fantasy world, with its own set of rules, and there are a LOT of important characters and locations, so it's easy to get confused.

But this is still such a good read! I like how fleshed out all the characters are and interestingly, not all of the action happens around the MC, so the story is told from multiple povs in various different locations. (I'm only 20 chapters in, but I've heard that there will be a lot of focus on side characters--so, maybe this could become smt similar to how LOTR or GoT is with its mult characters).

Though the plots are complex and slow in revealing answers, it seems all pretty well thought out and there hasn't been any glaring plot holes either. The art looks excellent too. Definitely rec for fantasy readers!

The summary here is kind of confusing, so here's the basic plot:

The MC was a mage, soul-bonded to a dragon (making her also smt called a demidragon), which sometimes caused her personality to become dragon-like: self-centered, cold, and arrogant.

Unfortunately, this aspect of her bond greatly and negatively affected her relationship with her lover, a prince, and caused the MC, who was carrying his child, to suffer anxiety/depression bc of her fear of being a danger to her loved ones (bc the dragon aggressively does not care one bit abt any humans aside from the MC and that demeanor gets passed to the MC whenever she has a personality shift), as well as resentment and self-loathing bc of her dragon bond for making her a danger to her lover and unborn child.

In a series of related events, MC's mental state continues to deteriorate, so she decided it best to leave the prince to stay with the dragon and had planned to give the child to the prince after birth to protect them from her. However, before the child was born, the prince died. MC blamed herself for this and in her grief, she took her own life.

But then, she finds herself waking up in the body of a woman from a family who can't use magic yet still living in the same world as her past self. More confusingly, even though the world should be the same one, its history had changed, specifically no one was able to recall her past self being in a relationship with the prince. And the woman, whom the MC possessed, also had a mysterious past related to the dragons.

Meanwhile, her dragon had gone berserk after her death and was causing trouble across the land too.

About the ML...
Spoiler (mouse over to view)
The series is still ongoing, so this isn't 100% certain, but the prince should be the ML. It turns out that he's alive in this alternate(?) world.

A little more on the MC and her mental state:
Spoiler (mouse over to view)
MC suffered a lot of trauma from her bond with the dragon, whom she resents even more so bc their bond means that she can't properly hate him either. And this carries out into her new life too, including a spiraling self-loathing for her actions costing the life of her unborn baby and despair for not being able to die (she's still su*c*dal too and only agreed to help find the original owner of her new body so MC can pass on).

She ends up possessing a woman from a family she initially disliked from before and cares little for, so that colors her interactions with them too. While it doesn't excuse the MC's disregard of her new body's wellbeing, she's also not in a stable state of mind either and it looks like she has a long road to any sort of recovery, esp as it seems like she might still be bonded to the dragon.

Good
by Snoopy219
March 1st, 2022, 3:31pm
Rating: 8.0  / 10.0
Plot is really refreshing and unique and personally I think the art style here really suits the fantasy setting.
Spoiler (mouse over to view)
Mc at times can be frustrating and her pov is hard to understand, she seems unreliable perhaps because she’s not human and very unstable. Because of this I often feel more bad for the side characters than I do for her. The problems and sadness the characters are feeling really makes this a good one to read since they’re all pretty much linked to the dragon and Yvonne.