Login to add items to your list, keep track of your progress, and rate series!
Description
1-3) Rebirth
Zenji finds out he has a terminal illness called VEB and has to retire from his SIS job. As he walks home, depressed, he runs into a boy who asks him to protect him in exchange for money.

4) Bet
Zenji's old friend Millie has been heart-broken since Zenji got a new lover. When another high-school friend drops by, will his mood change?

5) Bed - Millie's
Continuation of Millie's and Theo's story. From Millie's point of view.

7-10) Silence
Luca Angeli was born without a voice, but as he grew to ha... More...
1-3) Rebirth
Zenji finds out he has a terminal illness called VEB and has to retire from his SIS job. As he walks home, depressed, he runs into a boy who asks him to protect him in exchange for money.

4) Bet
Zenji's old friend Millie has been heart-broken since Zenji got a new lover. When another high-school friend drops by, will his mood change?

5) Bed - Millie's
Continuation of Millie's and Theo's story. From Millie's point of view.

7-10) Silence
Luca Angeli was born without a voice, but as he grew to have a beautiful features, his parents sold him to the mafia, where he has been living as a (sex) toy. One day, his cruel owners were taken down by Shion, a mafia hitman with mysterious powers, and he was freed. However, with nowhere to go, Luca could do nothing but remain where he was, thinking of his stoic-looking, taciturn savior... Less... 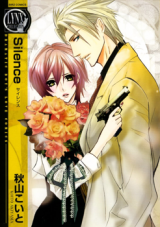 The Second and Third Story
by toastmuncher
March 13th, 2017, 9:03am
Rating: 6.0  / 10.0
Hmm so, I was going to rate this a 1 based on the first story alone. That just didn't do it for me, and the dialogues were just to cringey. Though on the whole I find this manga unpalatable. Especially the character designs.
What worked best for me was the second story. It's not that I have a problem with supernatural powers, as vaguely as they are shown here, but the story seemed to have more coherence over all. It's just that.
Was this comment useful?  Yes

Loved it!
by amai amai
October 12th, 2013, 9:14pm
Rating: N/A
Such a good manga! Great stories (I liked "Bet" the most) and lovely art, with a lot of visuals that would be great in anime. A pleasant surprise! Will read again!

@Kinky-Chan: The "cheating" wasn't about controlling his desire - it was for work (it's like James Bond doing the nasty with an enemy spy) that's why he had the "no biggie" attitude. Which is of course debatable too, but it seemed to me that it was so obvious to him that having sex with his lover is completely different from doing H stuff for work that he just didn't think about it from Madoka's point of view. Didn't connect the dots. And how he made up for it was very sweet.
Was this comment useful?  Yes

Uh well...
by Kinky-Chan
April 14th, 2013, 8:34am
Rating: 7.5  / 10.0
the first story isn't really my cup of tea. Plus, it was partially ridiculous. I mean, if a guy saves you from some weird disease and yet you still have the heart to go and have sex with another person just because you can't control your desire seems totally foolish to me. Elements like this isn't even necessary. It was a weird twist and it wasn't even interesting enough. I like the last story however. A mute who can't speak yet the other party can hear him speaking. It's so cool! At least there's a meaning in that story. It's cute and sweet, very touching too! Like how the uke tries his best to do what he can. It's simple and direct. I love it!
Was this comment useful?  Yes

I'd like to try more from this creator!
by MightyMaeve
January 11th, 2013, 2:44pm
Rating: 9.0  / 10.0
Amazing! Unique characters, compelling development, heart-throbbing relationships, smooth art, but way too condensed. Still, it was worth reading. The title story was extremely captivating! Rating for that story.

Sweet
by supmaguire
September 30th, 2012, 1:07pm
Rating: 9.0  / 10.0
At least the second story is. I liked the first story until the seme
Spoiler (mouse over to view)
cheated on the uke like "eh, no biggie"?! Really? This guy saved your life from a terminal illness and you think "ya, it's totally okay for me to bang some chick in Mexico because it's a place of 'passion'..."?! And he said that he didn't see any problem with "cheating," so deciding to do it again doesn't seem like a it would be a huge moral dilemma for him in the future. And to come back like, "hey I brought you this sweet mask, aren't you happy?" thinking that he can get away with never telling Madoka anything about what happened between him and a couple women pissed the hell out of me.
That rant being said, I really like the second story with Luca so far. I usually really don't like the whole feminine uke thing, but Luca is just so sweet and surprisingly naive for all that he's been through. I'm really looking forward to reading more.

This a more down to earth manga but with hyped hallucination and fantasy
by GrapeCherry
June 4th, 2012, 10:22pm
Rating: 7.0  / 10.0
I was pretty much let down. Although I like how they continue from one story to the next, I was totally expecting so much more. It reminded me of a psychological based theme, of which I hate, and I was pretty sure there was more than one occasion where I reread a page and still said 'what?'.

But I still like the first story. Something was attractive about it. It wasn't until that arc was over, the third chapter I think, did the story start to get confusing.
Was this comment useful?  Yes

what...
by sammiiii-san
September 25th, 2011, 8:50am
Rating: N/A
To be honest, i was disappointed.
The art on the front cover made me want to read it.
I did... and i was let down -_-
I wouldn't recommend this since I've read better ^o^
I will still wait for chapters 7-10 to come out though, since the summary for that really appealed to me

good!
by torride
August 7th, 2011, 7:48am
Rating: 8.0  / 10.0
the art is 7/10, story is 8/10...normally, this manga would render good as a pass time but there's something in it that draws your attention and keeps you excited over the next chapters and the premise of the story is also something different from the common yaoi stories. So far from what I have read, the coming chapters will still be entertaining.