Login to add items to your list, keep track of your progress, and rate series!
Description
A collection of short stories:

1-3) You're Hopelessly Cute
Mikuni Renji had always been serious in every love relationship. It was his bad luck to meet with people who only used him for satisfaction. Ichinomiya Shinobu, the sadistic younger flower shop prince who was his company supplier, fell in love with the Mikuni through constant teasing. Trouble came when Ichinomiya met Mikuni and his ex-partner on the street. Would Mikuni get dumped again?

1-3) You're Hopelessly Cute
Mikuni Renji had always been serious in every love relationship. It was his bad luck to meet with people who only used him for satisfaction. Ichinomiya Shinobu, the sadistic younger flower shop prince who was his company supplier, fell in love with the Mikuni through constant teasing. Trouble came when Ichinomiya met Mikuni and his ex-partner on the street. Would Mikuni get dumped again?

5-6) Sorry, but I Love You
The son of a "Mama" realizes his love for his coworker, who also happens to be a cross-dresser like the son's parent. Less... 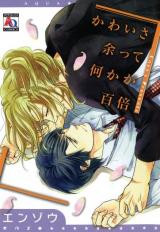 not that good.
by mangOKappu
August 2nd, 2015, 1:51am
Rating: 6.0  / 10.0
Second story the best. Thinking people like the other couples more coz they have the sex. The seme in first couple is kinda despicable, and the whole plot line surrounding 'transvestites' in the third couple is a pretty insulting depiction of what seems to be the relationship of a transphobe with someone genderfluid. ("Half ass-ing transvestite"

WHAT??)
For good points, the art is nice and if you can overlook the bad plot devices, the angst parts did make me feel, especially with uke in first story. Oh ya, and as I said, the second story is sweet.
Was this comment useful?  Yes

Third Story
by sarin68
June 24th, 2015, 8:40pm
Rating: 7.0  / 10.0
...is the best. I know others have said it but it's really true.
I don't like crybabies so the first story irritated me, the second seemed sudden and rushed, but the third I thought was pretty good.
It skipped the chemistry and went for developing their relationship even though it was also short. But it also had a serious topic to cover, so I thought it did it pretty well. Also Yui/Seto being the seme made me laugh so hard I almost cried. He was great and Kei was adorable as well though easily angered. Compared to them the other characters, besides Shinobu, were pretty flat.
Was this comment useful?  Yes

I'd go with the first story
by CJchan092
September 1st, 2014, 7:59pm
Rating: N/A
It's my most favorite since I'm a sucker of older uke and younger seme, but I think people tend not to like it because it was rushed. I think it had a good potential. It was just disappointing they have to end it just like that D8 Even the second story I believe it also had a potential. This is what I don't like about short stories and one-shots -.- Anyway, the third story has indeed the best story but I'm into
Spoiler (mouse over to view)
transvestite
seme and
Spoiler (mouse over to view)
manly but shy
uke.
Spoiler (mouse over to view)
He has too manly appearance for an uke...I mean, his hair and face and more importantly his facial expressions.
Although, it was fine during orgasms but...I'm still not just into those ukes.
It has a good story but personally I didn't like it because of the selected characters. So I'll go with the first story!
Am I the only one? Please don't tell me I am.
Was this comment useful?  Yes

The third story was by far the best; it was adorable and a little more realistic. The characters were both really likable without being too cliche. It's worth a light read.

For the main and second story, I went wtf when the couples declared their feelings. It happened too fast for me. What the third story had going for it was that the main couple already had feelings for each other prior to the story and it was just them coming to terms with it. Additionally, the third story had the most likable characters.
Was this comment useful?  Yes

it was damn good... wanna more
by kidoraku
March 15th, 2014, 3:00pm
Rating: 9.0  / 10.0
Oh yeah, this is what I like - good plot with some twists in it, nice sense of humour, brilliant drawings (faces able to express a lot, good proportions) and good sex scenes. I like to be surprised by plot and not to know how the story will end just after reading first page. I'm happy that this manga wasn't predictable. I like that the characters were different in every story, they had different looks, jobs, social status and all. I'm glad that I picked up this book. It really was fun. If you dislike cunning, sneaky characters and prefer lovey-dovey couples and romances lacking of sex you probably won't like this manga.

Not too good
by OmNom
October 5th, 2013, 5:18am
Rating: N/A
I want to like this, I do, there's just this annoying obstacle preventing me from fully attaching myself to the manga. I think overall the stories are sort of average-ish with some unavoidable cliche here and there visible. The art is also contradicting, I guess it's the characters' designs that make me feel like it could use more consistency. The manga as a whole is alright with both its highs and lows. I'd like some more substance though.
Was this comment useful?  Yes

My type
by Ariaofthesong
June 17th, 2013, 1:24am
Rating: N/A
I think that the first story really did it for me. It was different than the usual. In fact, I dont think I've ever seen a top like Shinobu. Long hair, deliquent attitude, fierceness. Usually, those types turn out to be the bottom and complete whiny babies. It was great seeing such intense expressions on his face. Ahhh, he's a super, super S... Just like me. Now I wanna go bully my lover.. Lolz. Mikuni was pretty adorable. Already over thirty, he's crys like a girl and lets a young kid bully him. Yet, unexpectedly, it seems like he is capable of being the one setting the trap. His dark expressions paired with Shinobu's flustered reactions; Priceless!.
Was this comment useful?  Yes

Third story is the best!
by 801crazed
March 12th, 2013, 11:29am
Rating: 8.2  / 10.0
The story about the "Mama's" son falling for his dad's employee was my favourite among this bunch. It's something different from your typical yaoi and I would definitely read that oneshot once again (if not the other 2).
Also, I would like to point out that in this oneshot, the son's lover is a crossdresser, not transgendered!