Login to add items to your list, keep track of your progress, and rate series!
Description
After the world ended in the original Devilman, Akira Fudo is in hell, seeking the soul of his beloved Miki while at the same time Doctor Hell is beseeching the underworld for power in order to get his revenge upon the hated Mazinger. Akira sets in motion a chain of events that earn the enmity of Hades himself, who'll stop at nothing to avenge the slights Akira commits against him. 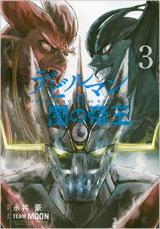 Great art, good story, but ends on a cliffhanger.
by likalaruku1
November 27th, 2018, 8:27pm
Rating: 7.0  / 10.0
In the original manga, Akira had an oblivious childhood friend attitude toward Miki & didn't seem to realize he loved her until she was already dead. Since his other childhood friend stabbed him in the back, after losing everyone & everything he knew, his regret for not reciprocating Miki when she was still alive seems to have consumed his thoughts. In a state of great despair, Devilman goes to Hades to retrieve the souls of the Makimuras & his friends. His poor foresight into how this would work out causes a zombie apocalypse.

It has the usual over-the-top melodramatic grand speeches, exposition, & people referring to themselves by full name & rank that we've all come to expect from Go Nagai. Not expected was the direct implication in chapter 5 that Akira's parents are Miki's aunt & uncle, which contradicts other mangas that claim his parents are dead or that he slept with his own mother causing himself to be reborn through her. But kudos must be given on how characters who died in the past are reintroduced to Akira, especially Jinmen.

While Team Moon's character art is not superior to Kinutani Yuu's (though I do prefer the way Moon draws Devilman's face), it's certainly more focused, tasteful, & less distracting. Kinutani is better at action scenes though, as Moon's fight scenes & darkly shaded backdrops often leave you wondering what the hell you're looking at. Yuu also at least made some attempt at remembering that the events of Devilman took place in the 70s, but here Akira is in modern attire, Moon did however put more effort into making the characters reflect Go Nagai's character designs more closely.

I'm not sure where this would fit in on the timeline. In the last chapter of Shin Devilman, Akira buried Miki's head, but here he carries it around like a precious keepsake.

This particular story seems to make use of a lot of cartoonish visual gags that don't really mesh well with the tone of the series, unlike Shin Devilman which was probably not trying to be funny but unintentionally was. If you are reading this review before checking out this book, picture in your head a zombie apocalypse with Greek gods, a cat girl, & talking pervert crow.

Having just read Noblesse, I can't help but notice the physical similarities between Hades & Muzaka.

The big battle between Mazinger & Devilman is great, but then the story just abruptly ends when Devilman takes on Hades with no resolution. Nothing at all is resolved, & you're left with so many unanswered questions.