Login to add items to your list, keep track of your progress, and rate series!
Description
From Manga.Club:
Mutsumi Oribe is a high school student who drifts ashore to an island after her plane crashes on its way to a field trip. However, the island has become a nest for giant, carnivorous insects. Can these high school students, who have now become prey to these monsters, escape the hell that is this island?! 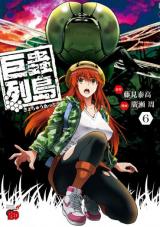 Monster of the week manga, and the r word
by Zackjunk907
September 14th, 2020, 3:16pm
Rating: 4.0  / 10.0
It's like someone watched Natgeo, took some notes and said "That! But with women around to make r based drama whenever we need the story to move forward". It's a manga that puts so much effort to be lazy. As a member of the EDF I of course came for studying how to combat giant bugs, but it just was a vehicle to get back to another r scenario.
Was this comment useful?  Yes

I can read most anything but this trash.
by Cynistera
December 27th, 2019, 7:01pm
Rating: 1.0  / 10.0
I'm on chapter 14. Don't read past chapter 14 because it can't get any worse than this. The characters are one dimensional, no explanation to anything so far, nothing but female characters either getting mutilated or raped. This is one hell of a trash manga, do better things with your life like watch paint dry.
Was this comment useful?  Yes

Preview after one volume let's say
by Hell_Clues
August 24th, 2019, 2:27pm
Rating: N/A
For a different perspective. I'll say I think giant insects are very dangerous. What a natural born enemy and gross. They're also very strong. Physical attacks in this series and bravery alone doesn't work. It's all about smarts.
But let me mention the negatives. The characters are very bland. In this type of series, exaggerated characters can be good villains. But it's less annoying if the characters are likeable. Most of the characters, including the main, just have no personalities. They go from one situation to another.

Also the knowledge to be useful seems very lopsided. sometimes other characters might have a tidbit. And I get that the MC is in her element. But to me this is a downgrade. Again, it's much better in this kind of series when it's spread out a bit more. And I wonder if this is a result of the popularity of isekai series. But maybe I'm reaching and It's possible things will improve.
Was this comment useful?  Yes

Reads like Cage of Shite...
by Lost Rabbit
February 15th, 2016, 9:39pm
Rating: 2.0  / 10.0
For any of you that know the manga Cage of Eden, this series runs with a very similar scenario where students are stranded on a deserted island that's inhabited solely by monstrous creatures. Given their new predicament, they must ban together to survive in any way possible. Unlike CoE which was overall pretty good, I've finally come to the conclusion that this series is an absolute abomination thanks to the most recent chapter that came out today.

Before I get into that whole mess, I want to bring up the fact that I'm very much not into series that are very big on ero-guro (eroticism + grotesque imagery/depictions mixed together). Dead Tube is a major example of this subgenre that's apparently quite popular amongst a number of readers. I would've found it passable enough to be a decent read, had only its writing not been such trash, where almost every character was secretly a sadistic dickhead all along and this apparently would be some kind of big twist! Personal feelings on that particular series aside, ero-guro can be pretty nasty since that's what it tends to strive for, yet I'm convinced that there are ways to make it at least readable. Not sure if Murciélago would fall into the subgenre, yet either way, it's definitely one of my personal favorite series to read.

Now coming back to this trainwreck, I'm going to recap what happened in the recent chapter, and no I won't be spoiling anything if you bear with me on this:
>The group of students travel down a dark path in the woods looking for shelter.
>Main girl gets kidnapped by a single guy without anyone noticing, and he proceeds to molest and eventually rape her.
>Two of the students stop him halfway through with a single wack to the head, yet the guy's barely injured as he's able to make a wisecrack about how the two students should join in and make it a gangbang.
>Main girl who just got raped immediately puts her feelings of being violated aside to try and warn the group about something she realized earlier before she was kidnapped.
>Random girl slaps the main girl and says she's being rude to their teacher, and won't let another girl explain how main girl HAD JUST GOTTEN RAPED.
>Everyone continues to bicker and be complete idiots, with that being the end of that chapter.

I wish I was making this all up. There's a chance things will be addressed later with this current chapter, but as of now, I'm really pissed off to see just how fucking incompetent this author is, as to make such batshit crazy characters that are so devoid from reality, and above all else get away with some absolutely disgusting behavior that's never given proper justice. I liked the main girl and a few of her friends to the extent of them being at the very least decent human beings, yet the fact that so many of these characters are horrible people that get away with a lot of bullshit just makes this unbearable. I'm sure there are people that love these kinds of stories, but mind you, I'm not exactly a masochist that enjoys seeing this kind of repugnant tripe.

Surely it was very much similar to Cage of Eden right from the very start with its concept, so I hoped that it would've managed to bring something new to the table; yet this was definitely not what I would've ever hoped for. I'd love to come back to this someday and see things improve if at all possible, but then again, I probably shouldn't get my hopes too high like I initially did when first picking up this nonsense...