Login to add items to your list, keep track of your progress, and rate series!
Description
Welcome to the lives and tangled loves of the Track and Field team! Stern coach Wada, dedicated and enthusiastic runner Ogasawara, kind and gentle captain Takashima, playful, teasing 2nd year Yamauchi, stoic and bad-tempered Konno and talented former runner Hashimoto Mizuki who must overcome the past if he wants to run again. 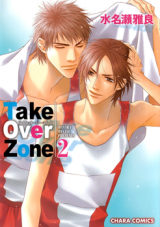 It's okay
by yuri_shibuya
November 29th, 2016, 12:48am
Rating: 6.0  / 10.0
The only thing that I want to commend is that its hard to differentiate the characters..
When I started reading this, I find it hard to memorize the characters cause they all look the same to me except for the black haired lead.
I'm not saying that the art style is awful but most of the characters don't have striking features. A little bit bland if you ask me..
Its only my opinion, so no need to throw stones..

Meh
by kitty1826x
January 21st, 2014, 12:57am
Rating: 4.5  / 10.0
Not the best, but not the worst manga I've read.
Only problem I have is that all the characters looked so similar to each other O.O It wasn't until chapter 8 that I was finally able to maybe tell them all apart.
I decided to read this manga due to the trauma tag, but that aspect wasn't that great :/
Honestly a lot of things seemed forced, and rushed.
I probably would have liked this better is the main couple were a different set from the team.
Was this comment useful?  Yes

Average
by sandyatthebeach1
December 12th, 2012, 4:54pm
Rating: N/A
Personally, I'm just not a big fan of Minase Masara's works- I've read quite a lot of them, but I just feel like her characters lack dimension, and I rarely feel invested in any of them. Her art is quite elegant and beautiful, but I feel like her characters tend to look too stoic, and their emotions aren't well-depicted in the art, or the speech. Her art is so pretty, but for some reason... her characters just always look sort of cold, even when they're blushing, or even during the ehem... love scenes. Anyway, in general, this manga was just average- it wasn't bad, but I wouldn't read it again. The plot is okay, characters okay. It's nothing really unique, and it doesn't leave you with the feeling that you would want to read more, or with that feeling of satisfaction that you get at the end of a good story (it's not even particularly smutty)- but if you like her work, by all means, read it. This wasn't that bad, just not to my taste. I found it a bit bland.
Was this comment useful?  Yes

Liked it a lot!
by Namiya
September 25th, 2012, 3:29pm
Rating: 9.0  / 10.0
I wasn't sure about the track team plot but I really enjoyed reading this!
The sports part is well done, it keeps being interesting and the love subplot is well implemented into it as well. I liked all the characters, just feel a bit sad that with so many characters, there's not enough manga! I wouldn't mind reading another 1 or 3 volumes about the other couples and how their lives went on.
The love triangle was also really well implemented.... I gotta say I liked this manga all around!

I'd recommend this to everyone who can spend the time reading the two full volumes.
If you are looking for a serious but sweet story with a tiny bit of angst and a sports plot then you might like this! The sex scenes are hot but scarce.
Was this comment useful?  Yes

Meh
by Serendipity_
January 13th, 2012, 9:16am
Rating: 6.0  / 10.0
Overrated, I´m not a fan of Minase Masara but I´ve read some of her work and all I can say is that it´s a "typical" Masara type of Manga. One good thing Masara decided to do was finally doing another theme than just acting.
I felt that this manga was kinda plain and after a few chapters I even got bored. The plot is cliché and there isn´t that much orginality too it, if it weren´t for the varied types of Characters that was included in the story, I wouldn´t even bother reading further then Chapter 4-5. I was also hoping that we could get a side-story or even a Oneshot of Takashima and the Coach, but that didn´t happen and I got stuck reading Hashimotos whining.

This manga isn´t necessarily bad, but it isn´t good either. Maybe good for yaoi-starters, because the sex-scenes were reduced to a minimum and when they had sex it was very "light". Not explicit.
Was this comment useful?  Yes

Ok
by KaoriNite
October 23rd, 2011, 1:51pm
Rating: 7.0  / 10.0
The story is a decent read but nothing special. When I got to end, it was just like "really, that's it?" Its not that I was expecting something different to happen, but it was just kind of bland. I do like that the story takes molestation seriously, unlike other yaoi where a guy gets raped and the next minute he's perfectly fine. I was also interested in the coach and the captain so perhaps there will be a side story or something
Was this comment useful?  Yes

Just ok
by varianthart
October 22nd, 2011, 11:09pm
Rating: 7.0  / 10.0
I'm not quite sure why this has such good ratings. It's not bad, but it is decidedly average. Very typical minase masara, really. The story is cliche, which isn't bad to me if the characters and writing are excellent, but in this case they were also just average. The characters do most of their developing early on, and it's pretty minimal and rushed. Art is what you would expect from this mangaka, so also nothing special(and lots of dead fish eyes or overly shocked looking facial expressions where this was not the intent), but still attractive in it's own way.
Was this comment useful?  Yes

Enjoyable
by FeyPhantom
March 4th, 2011, 1:44am
Rating: 10.0  / 10.0
It's stories like this that make me think Minase-sensei should stick to longer stories. I find the characters in this one all interesting and I can't wait to see where it goes with all of them. Probably my favourite sports/yaoi combination.
Was this comment useful?  Yes

nice :)
by Sakura_Hikizaki
October 2nd, 2009, 3:05pm
Rating: 9.0  / 10.0
I'm really enjoying this manga, it's been a while since I read a minase sensei manga where the characters are still in highschool. I find the series very cute and story wise very good. I will keep up with it and see how it ends. Also the artwork is a plus.
Was this comment useful?  Yes