Login to add items to your list, keep track of your progress, and rate series!
Description
He has the seal of the beast carved into his skin. The story of rogue monk Ashiya Douman begins now! 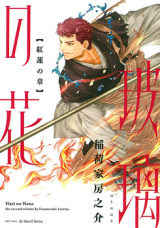 Barely shounen ai, much less yaoi
by whydontyoujustsay
July 12th, 2020, 5:19pm
Rating: 5.0  / 10.0
the only sex I remember was with 2 minor characters for political spying...
none of the characters who are "in love" ever have a real "love" scene. seriously, why not just write a shounen with a bl subtex?
also the plot is...sooo boring... I get it, history, magic, blah, blah. I just don't care. every historical manga has the same plot, too many underdeveloped characters, and predicable endings.
Was this comment useful?  Yes

no thanks
by lilliful
July 17th, 2018, 6:57pm
Rating: 1.0  / 10.0
Not great, and I wouldn't even say it's clear that the feelings between any of the two main couples are romantic love -- I've read many a Shounen Ai where feelings came across much more clearly than this. The story is confusing and non-linear. The characters feel like a hollowed-out recycle from the much superior but tragically dropped Maiden Rose series. The ending is unsatisfying. Heck, even the characters I find to be much less attractive than those of the author's other works. Give it a miss -- I regret the several hours I spent trudging to the end of this one.
Was this comment useful?  Yes

Hard to Get Into
by KaoriNite
October 22nd, 2016, 9:38pm
Rating: N/A
The story was quite hard to get into. As others have mentioned, Inariya tends to have plots that go back and forth in time. On top of that there's the historical backdrop and supernatural elements mixed in. And I just didn't understand enough of what was going on to really start to care about the characters.
Was this comment useful?  Yes

Take your time and enjoy this slowly...
by Pennyiscute
May 7th, 2014, 9:12pm
Rating: 8.0  / 10.0
Inariya Fusanosuke has the ability to give you a history lesson with some breathtaking art, defined characters and above all: amazing forbidden romance.

Hari no Hana (Quartz Flower) is based in the Japanese Chowa Era (1015 A.D.) where a junior priest, Ashiya Douman, and his companions have been employed to abolish a curse afflicting the Emperor's eyes. That's basically the make-up of the plot, however, the story is centered around two people: Douman (a priest with red hair, golden eyes and a seal of the beast tattooed on his forearm) and Suikei Ajari (a priest who saved Douman as a child and is bound by his curse--you find out in later chapters).

The chapters tend to go back and forth in time. This is definitely Inariya's style of plot-structure. She never tells the story as a whole upfront, instead gives you the action and suspense followed by back story in small doses, chapter by chapter, teasing and taunting with certain scenes and events. Frankly, it's frustrating and confusing until you get satisfying answers, although, I tend to find myself asking "what just happened?" a lot.

History is not my forte' and nether is Japanese folklore or magic. I struggled with the types of curses and items used in spiritual rituals. Although, there was nothing Wikipedia couldn't explain and the translated side-notes did help. I just want to forewarn readers: there is a lot of supernatural scenes and action based around historic Japanese mythology. Not enough to deter you but some find it very confusing, like I did.

Inariya's art is in a class of her own. I am drawn to her works and find them artistically outstanding. Her scenes of action are sprayed out over the panels with exaggerated movements, it's almost like her fabric dances with the characters themselves; she has amazing eye for costumes and clothing. Her works are just gorgeous. One happy fan here.

This is tagged as yaoi and without giving too much away there is not a lot of lovin'. There is only one love scene from side characters and I felt that it was thrown in to prove to readers that it is a boy love and to show the extent of her smut.

Now that I have finished this (at 29 chapters) I am truly disappointed in the ending. At first, I was not 100% sure what happen. I then re-read and read it again to finally grasp an understood of the conclusion but it's not a satisfying one. Not in the least.

The story is not something I would normally read but I still find it interesting and I just love Fusanosuke's art. I would recommend this to someone who likes to take their time and absorb the events slowly; this is a complex story and needs your full attention.

Difficult
by varianthart
July 11th, 2012, 1:52am
Rating: N/A
I keep trying to give this a go, but I can never get through it. I love plot, but unfortunately I found this very confusing for various reasons. I feel as though I need historical knowledge to follow, which I do not have. The flow is also very strange and skips back and forth through time without warning and because of this I find the characters to be even more difficult to keep straight. I may very well be too stupid for this one. Haha... I don't normally come across many series which I find difficult to understand though. I will probably give this another try at some point because it seems to have potential.

As expected from Inariya Sensei
by keyracunan
August 2nd, 2011, 8:56pm
Rating: 8.0  / 10.0
Basically the author didnt make Yaoi, but rather a shounen with gay main couple (yeah that's weird) so if you want your gayporn to be overloaded and dont want to deal with too much plot, then this might get you bored.

so I've been reading until chapter 8 so far, and yet the story hasnt really unveiled yet. But basically this is what happens:

Spoiler (mouse over to view)
Suikei Ajari (the main uke) was the crown prince Atsuakira's twin, and that time twins were seen as misfortune so one of them must be killed when they were babies. But the man who supposed to kill him took him instead, raised him as a priest in Mt.Kouya and prepared him as a curse "vessel" one day, meaning he would be the one to take enemy's curses that were supposed to be directed at the Crown Prince, without the Crown prince knowing about his existence.

Ashiya Douman (the main Seme) was found by Suikei when he was a boy, wounded and deserted in the snow. As expected, he's head over heels towards Suikei. Later he also became a Priest in Mt.Kouya, and they had lived quite a peaceful life together until 'incidents' happened (what incident, it hasn't revealed completely) that he had to left the place. (My guess, one of the reasons was because he "tainted" Priest Suikei while to be a "vessel" Suikei has to be pure and such)

I make it sounds so simple and cliche but believe me it's not that easy to grasp the problem, because the timeline's random, and it's like broken pieces gathered together. The story began with Douman battling shits in the mountain with the cursed tattoo on his arm together with his freakshow convo, busy in thoughts, mumbling who-knows-what, and how they're still connected and shit. Flashbacks, Banshees and Elderly conversations take places randomly. It turned out that that day was the day where Suikei started life as "vessel", hence Douman wanted to get him out of where he was.

As for me,If you like Maiden Rose (Hyakujitsu no Bara), you might like this one. IMO the plot itself is more interesting than Maiden Rose (and the Seme looks better, still manly but hey you can call him okay) , though Maiden Rose still excels in smut. I dont expect Smut to happen in Hari no Hana, at least not in the near time.
Was this comment useful?  Yes

Odd flow but good story
by Sasageru
July 5th, 2011, 6:30pm
Rating: N/A
Hmn great art, nice story but man is the timeline confusing. This is riddles with back steps and flash backs and it makes things difficult to follow at times. There are also alot of historical references in titles and names which if you're not familiar with them also make things a little hard to understand. So far its promising despite the confusing flow and complex elements. I'd really like to read more.
Was this comment useful?  Yes

good!
by torride
May 7th, 2011, 9:49am
Rating: 9.0  / 10.0
the story so far is good but you might do a double take to understand the plot, also I give it a 9 because I see the mangaka's characters from Hyakujitsu no Bara recycled and made into what it is now here in this manga, though it's far from the game to say if the relationship between the main characters would become the same of that from HNB.

Overall, this is a very interesting story and it shouldn't be passed up by readers who are in for a yaoi manga that evolves not from sex but by a real plot...an interesting plot.
Was this comment useful?  Yes