Login to add items to your list, keep track of your progress, and rate series!
Description
All men in the office know that the new employee, Tsujimura, is gay. However, they keep it a secret from the girls. This isn't only because they are relieved to know they don't have to deal with such a great competition...

Latest Release(s)
c.Oneshot by Dangerous Pleasure over 11 years ago
Search for all releases of this series 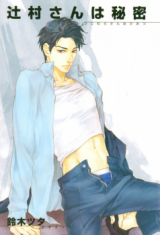 cute, heartwarming and a nice story about a romance ready to blossom. too bad we didn't get to see how it blossomed! ;( i loved the main's reaction to the gay guy "my only daughter!" what?! are fathers normally attracted to their daughters? XD lol.

Spoiler (mouse over to view)
also contains the BEST reaction from a character to witnessing an attempted rape, in my opinion. none of this "don't touch my belongings" bullshit but a clear "wtf are you doing in an office building as an employee?!" although it would have been beyond priceless if he had screamed "what are you doing to my daughter?!" lmao.
Was this comment useful?  Yes

How interesting...
by yumemiru
August 29th, 2011, 2:08am
Rating: N/A
I see a lot of praise for this author and her ability in general. It seemed really promising, so I tried reading this oneshot. It's interesting. The characters are interesting and the story was pretty decent. I do think that this could be even more drawn out though. After reading this oneshot, I still don't feel like I really understand any of these characters yet, especially the Tsujimura-san. Maybe this is one purpose by the mangaka, but as a result I don't really understand the attraction of the main character. I guess the problem here is that I think there's a lack of character development on Tsujimura.
Was this comment useful?  Yes

Love this!
by booyaka
March 19th, 2011, 7:42am
Rating: 10.0  / 10.0
I adore her one shots. Her stories are amazing regardless, but she's one of the few who can do a great one shot believably and with endearing characters and a great storyline. Her art is fantastic as well. I can't say enough good things about Suzuki Tsuta. The only bad thing I could say about this is as usual the stories always leave me wanting more.

original
by pleochroic
March 14th, 2011, 8:02pm
Rating: 8.0  / 10.0
another oneshot by suzuki that made me smile -- she really is one of the better mangaka when it comes to short stories. sure, as usual i want more; but i'll just have to imagine it -- and i don't mind. we're not talking big drama, it's just a glimpse into the lives of two salarymen.

and her art just keeps getting better.
Was this comment useful?  Yes

Unique
by PaperSwallow
August 12th, 2010, 7:28am
Rating: N/A
Can't really say much that AeeDee didn't already mention.... Great oneshot ( as always, I'm longing for more), unique story, it's a an original touch to it but still, the whole concept is a never read-before, about him smoking in his usual place thinking of the other guy, ignoring the fact that he seems to be attracted to him.

A surprisingly good oneshot
by AeeDee
July 30th, 2010, 1:28am
Rating: 9.0  / 10.0
Like most Suzuki Tsuta stories, the premise of this one is simple. Tsujimura-san is the 'new guy', and is especially known for being gay. He's a curiosity...
But he's not as odd as the title makes him sound. He's intriguing, but this isn't a story about how odd he is in the first place. A few pages in, it begins to take a slightly surprising turn, down a path with more substance and emotional value. This story starts off calm and ends with a pleasant feeling, that makes it great to revisit every so often, when you want a slight lift.

I also have to mention, the art is fantastic in this one. Suzuki Tsuta's style is really getting refined, and these panels are among the nicest and cleanest I've seen in her work. A strong effort, despite its simple structure and clean look.