Login to add items to your list, keep track of your progress, and rate series!
Description
A regular college freshman Kim Jung Hyun and his roommate Kim Homo are polar opposites and friends. It's a story that deals with many sensitive topics with a dash of humor. 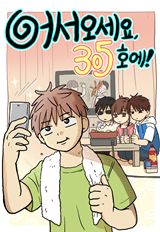 Brilliant...Just...brilliant
by infinity9001
February 21st, 2012, 11:36pm
Rating: 9.8  / 10.0
Having a best friend who's gay and seeing him deal with a lot of the stuff Kim Homo (lol, yes that's his actual name) goes through, I personally found this webtoon endearing and real. A warning: This is not bl. So don't expect the homophobe-turned-gay-after-sex trope. It's a real slice-of-life comedy that deals with gender and sexual orientation issues. I really do think everyone should read this, as it's an eye opening manhwa that deals with things most societies are generally uncomfortable with (although nowadays the gay rights movement has gained a lot of steam). My korean is horrendous, so I'm hoping this webtoon gets scanlated a bit quicker (although I'm thankful that such a webtoon is getting translated at all in the first place), but releases are a bit slow.

Overall, if you're a yaoi fan or if you're a homophobe, read this no matter what. It may deal with issues that you don't want to really want to acknowledge, (since most yaoi these days are apparently set in a sparkly world where everyone is gay and/or you're in denial about there being homosexuality in the world) but it's a thought provoking read. You really won't be disappointed, and if you're like me, you'll be laughing and crying at the same time.
Was this comment useful?  Yes

OMG I LOVE IT
by niteangel
December 20th, 2011, 7:48pm
Rating: 10.0  / 10.0
AMAZING!!! I LOVE IT!!
Sorry, but I'm the slice-of-life type of person and I get excited when I come across a gem like this. This series is full of situational humor. I've never really read anything like this. The characters are totally lovable. I fully recommend this series.
Was this comment useful?  Yes

Fun!
by ForteAtrox
April 7th, 2011, 1:01am
Rating: 10.0  / 10.0
Hahaha, people would quickly judge or misunderstand this series but this is actually really hilarious.
Not only that it shows directly the stereotypical opinions of society on homosexuality, while it shows the slow acceptance of it through the characters. It's a really fun series with the perfect touches of comedy. I'd recommend it to anyone.

I like it a lot ^^
by s2sari
December 4th, 2010, 9:51pm
Rating: 10.0  / 10.0
This manhwa takes on lots of controversial topics that people like to shun and ignore (gay,transgender, lesbians). These types of topics may seem really heavy but actually, the author adds in lots of humor and creates a light atmosphere. Give it a chance ^^, it wont disappoint you.
Was this comment useful?  Yes