Login to add items to your list, keep track of your progress, and rate series!
Description
1-4) In the early 20th century a massive crop failure sends Yanakawa Narito to Tokyo to earn money for his sick wife and children. But jobs are scarce, and only an emotional plea to Tsuzuki gets him a position. But Tsuzuki is expecting more than just cleaning services, and Narito can't leave...

5-6) Wandering by a lake one boring summer day, Kanasaki runs into Satori, a young ghost trying to find peace. Kanasaki decides to help him, but it isn't long before he begins to wish for Satori to stay.

7-extra) Young Akane (barman from the first story) has a crush on friend Tsuzuki, but ends up sle... More...
1-4) In the early 20th century a massive crop failure sends Yanakawa Narito to Tokyo to earn money for his sick wife and children. But jobs are scarce, and only an emotional plea to Tsuzuki gets him a position. But Tsuzuki is expecting more than just cleaning services, and Narito can't leave...

5-6) Wandering by a lake one boring summer day, Kanasaki runs into Satori, a young ghost trying to find peace. Kanasaki decides to help him, but it isn't long before he begins to wish for Satori to stay.

7-extra) Young Akane (barman from the first story) has a crush on friend Tsuzuki, but ends up sleeping with classmate Tatsuhisa. Less... 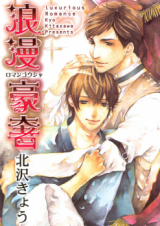 cute
by styleai
February 5th, 2013, 9:22pm
Rating: N/A
didnt like the first story as much as the ones following it.
but the art is very cute and the stories are all pretty unique!
overall it was enjoyable.
Was this comment useful?  Yes

ok
by varianthart
April 16th, 2011, 9:31pm
Rating: 6.0  / 10.0
The stories were pretty average really. They were cute, but unrealistic and rushed as far as emotion goes. They're really not going to make you feel much, nor are they particularly smutty(lots of sex, but the sex scenes are very short and more of like "and then they had sex" *end scene*, but they were cute enough I guess. The art, however, was extremely good. Really, really gorgeous. It was worth the read for the art, but the story alone didn't do much for me.
Was this comment useful?  Yes

i liked it...
by mangafan321
April 3rd, 2010, 8:49pm
Rating: N/A
i didnt feel like the uke was weak, i felt like he stayed there because he needed the money for his ill wife and kids. i felt like he was a strong person just trying to be there for his family. its true that he gets together with the seme too soon. but there was something about this story, that i just liked it, and i loved the kids.
Was this comment useful?  Yes

Love it
by Sakura_Hikizaki
September 10th, 2009, 9:47pm
Rating: 10.0  / 10.0
I really enjoyed this one. The art was soo different from the usual. I personally found the story soo charming and very sweet. I'll be checking out work from this manga ka for sure. :3
Was this comment useful?  Yes

Gods, where do I start?
by VampireBanana
February 1st, 2009, 8:01pm
Rating: N/A
The plot had some promise but the story went completely predictable after a while. The dialogue, the scenes were so inane and the characters were really annoying. I'm not sure if I could've even called it characterisation since everyone suddenly seemed bland, dreary and seemed more like puppets created to pull the story along. Such a pity since the characters DID feel quite all right at the beginning.

I actually held on for almost 3 full chapters but I just couldn't take the manga anymore. Geh... I want my 10 mins back.

oh well...
by bakayarou
August 26th, 2008, 8:36am
Rating: 8.0  / 10.0
I really liked the artwork and the setting of the story (early 20th century) and although I normally like a little comedy (chibi faces, idiotic facial expressions and such) to spice things up, I felt that in this story it didn't fit at all and slightly spoiled it. plus, I have to agree, the 'father' really looked like a high school kid. I'll give it a better rating anyway, just because the artwork is really good (compared to other much higher rated yaoi manga).
Was this comment useful?  Yes

Ugh.
by brid
August 17th, 2008, 2:12am
Rating: 2.0  / 10.0
Now that I've read the whole thing, I can honestly say that there wasn't a single story in it that I enjoyed. The artwork was a bit strange: at times beautiful, at other times, somewhat awkward. The plotting and characters--in all seven chapters--ranged from the merely foolish to to the downright stupid. All in all, I found it to be thoroughly disposable yaoi.

What lowered the score for this one even further, however, was how hateful I found the first story to be. With a sick woman in the picture (and a couple of kids back home), I found it impossible to root for this couple. Moreover, both uke and seme were simply distasteful characters, though for different reasons: the uke for being utterly spineless, and the seme for being uttlerly self-involved. How could the mangaka expect us to pity the "poor little rich boy" seme ("my parents were gone from home a lot when I was a kid! I'm all twisted up inside!") when all of the other characters had problems far more significant than his? Yet this "sad childhood" is used as the acceptable justification for all of the seme's bad behavior, including his later attempt to molest the uke while he is standing on his dead wife's grave. But as bad as all that was, I was totally unprepared for the massive switch in tone that occurs in the second half of the story as the manga goes from a serious/tragic story (with plenty of uke-rape) to a *comedy* involving the seme, the uke, and the uke's kids all attempting to live together as a big happy family. The uke's young sons naturally adore the seme and are pleased as punch that their father has (six months after the death of his wife) taken up with such an awesome guy. Hell, they even take to beating off potential rival-semes! (Awwww... "Full House" has nothing on this series--eat your hearts out Olsen twins!)

If after reading the above you still think this sounds like a charming series, then more power to you; you've a much stronger grip on your gag reflex than I do.

Eh.
by Derevex
August 16th, 2008, 6:50pm
Rating: 4.0  / 10.0
To be honest, I couldn't get past the first chapter. What interested me in it was the description, which sounded like it would have a lot more turmoil and drama to it than this. What I've read of it so far, I didn't like very much. Pointed out by others, it's very mainstream— the "father" looks like he could be a high school student, as with Tsuzuki. There would have been nothing wrong with making both masculine— in fact, that would have made it better. The plot seemed extremely "blue-printed";everything was easy to guess once you've had a good taste of what most yaois are like. I felt like it had a really good driving plot, but was executed poorly.
Was this comment useful?  Yes

Hmm...not...bad...
by zefieyuki
July 17th, 2008, 11:05am
Rating: N/A
I enjoyed it up until a certain point. I'm not a yaoi fan, but the summary intrigued me. So I decided to give it a try. It didn't sound like a yaoi, and it seemed like a forced yaoi to me. Could have been a wonderful story, especially since he had a wife and kids..
But I agree with Friera..mainstream and..got dumb.
Was this comment useful?  Yes

its okay
by allsold
May 12th, 2008, 7:54pm
Rating: 8.0  / 10.0
with reference to Friera's comment, its not that different from a few other yaoi mangas ive read so far. Its not all fluff and smut like most, but its not that exceptional either(but maybe thats just because ive read 2 with a similar plot).The art is nice and the characters are pretty cute. but no way does the uke look 30! ^_^
Was this comment useful?  Yes