Login to add items to your list, keep track of your progress, and rate series!
Description
From Psycho Pandas:
A short 16-page oneshot about the relationship between two high school boys who are incapable of admitting their feelings to each other and the girl who perpetuates their anxiety. 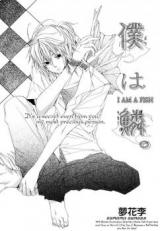 I mean...do something...?
by flowinmyboat
August 15th, 2021, 2:26pm
Rating: N/A
How am I supposed to feel bad when neither of them would even bother to do anything? This is the kind of angst that pisses me off. I won't rate it because I just hate this kind of inaction so I would give it a lower rating than it deserves.

It's a story about cowardice, insecurity, and longing as another reviewer said.

i need happy ending sequel
by Miachann
August 5th, 2020, 6:29am
Rating: N/A
agh my heart hurts what a bitch he got himself into
Was this comment useful?  Yes

16 Pages, yet Action Packed
by toastmuncher
January 1st, 2017, 1:20pm
Rating: N/A
This manga is really one of my most fav one-shots. It really is so condensed that I really had to wonder if I did just read 16 pages or was it more than that. And it's that there are a lot of dialogues; but it's their placement the the framing.
Was this comment useful?  Yes

Ugly. Very Ugly.
by Kinky-Chan
February 6th, 2014, 7:21am
Rating: 7.0  / 10.0
They both like each other but do not want to confess? I don't even feel sorry at all. Come on, how naive and pathetic can that be? Yeah, so what if they're both guys? Afraid of rejection or what the society thinks of them will come last. Not to mention that there's this chick trying to come in between of them, thinking that she's got what she want and being all manipulative. Reading this makes me hate all three of the characters. They're not even good characters in every way. If everyone refrains themselves from confessing like the two of them, there won't be any couples on this earth. None!
Was this comment useful?  Yes

Urgh
by OmNom
October 14th, 2013, 9:03am
Rating: 10.0  / 10.0
This is a very nice one-shot. It's short, but very condensed and is able to convey a lot more than usual longer manga series. I think the metaphor used is very poetic and symbolic, very subtle and calming yet lurking with a hidden power underneath the water, just waiting for any trigger to rise. The story's really bittersweet; it sums up perfectly the true essence of humans' insecurity especially when one's in the danger zone called love.
The ending isn't necessarily resolved but it also doesn't leave readers hanging unsatisfied. Very well done indeed.
Was this comment useful?  Yes

Bittersweet 16 pages
by butterflyflying
January 13th, 2012, 1:25pm
Rating: 8.5  / 10.0
Spoiler (mouse over to view)
Confessing is always scary, but more so when you are doing it to your friend, who also happens to be the same gender. Look into society, and you know how hard being in a homosexual relationship is. You can't expect 2 high school boys to be so open and willing to bare their all like it's nothing, so I understand the helplessness that the two boys feel in this oneshot. It's bittersweet, because they both like each other, yet, they can't express their feelings beyond friendship. It's much easier said than done to confess, and regret might seem easier to handle than rejection, especially when it's so obvious that the two of them want to stay by each other's side, rather than be apart, at any cost--even if they have to date other people to maintain their friendship. Some people might not understand this motive, and think it cowardly, but I think it shows how strong some people are. Not everything in life can be sunshine and happiness, so this aspect was realistic.

Otherwise, the girl made me mad because I can't stand manipulative people who do things for their own benefits while knowing that the person that they "love" is hurting because of their decisions to manipulate. I can sort of understand her reasons for why she is like this to her boyfriend, but I still don't like her motives, as I think it makes her love ugly.

Whether the two boys get together in the end is untold, but I chose to be optimistic and say that they will overcome the hurdle that the girl gave them. She's just part of the obstacle to them being together.

It's a good bittersweet oneshot for 16 pages that left an impression on me, so I rate it an 8.5. If the author expand on it, I would have given it a better rating.

"Don't forget me. I'll be the fish from your memory." Such a bittersweet line.
Was this comment useful?  Yes

Powerful
by crazyboutcute
January 9th, 2012, 10:08pm
Rating: 9.0  / 10.0
I agree with what louie29 said. Some other reviewers criticized the protagonist for not taking action, but I feel that his inability to confront Furuya was the more realistic scenario. I, too, believe that people should take the initiative in achieving their goals, but when it comes to very personal matters like love and relationships, I also understand that this can be extremely difficult to do. It's not usually a wise move to confess your feelings to a person who is dating someone else unless you want to get hurt.

That being said, this manga was very poignant, expressing strong and painful emotions like loneliness and longing. Takao wants Furuya to look at him, going so far as to grow his hair out to suit Furya's tastes and pondering wistfully why he wasn't born a woman. The girl didn't bother me in this manga. I could actually understand her, as strange as it may sound. It seems that her feelings for Furuya are very real, and she's using Furuya's inability to confess to Takao to keep him close to her. She seems to be afraid that he'll leave her, and that would put her in the same place as Takao. So I don't think she's motivated by spitefulness or cruelty but rather fear, especially fear of separation and loneliness.

A very cute, deep, and heartwrenching oneshot. I recommend this one.

if you realy want something then you at least make an effort.
by lylicagalatea
September 6th, 2010, 8:18am
Rating: 8.0  / 10.0
how is this sad? it just makes me angry.
I hate people who can't take their lives in their hands.
What? No one has ever confessed to someone fearing it won't go well? Cowards! Both of them!
Get your ass up from the chair/bed and confess! Otherwise your whole life will be one of regrets!
And about the girl, it's not like she has made him sign a contract, so move it!
No pity for those who don't even TRY to get what they want.

Anyway, I'm giving a good rate because the fact that the manga made me feel such strong emotions means it's good. I don't always have to relate to the protagonists to say that it's a good manga.

What makes this manga the best is the bittersweetness.
If it wasn't like that, it would be just another story where best friends fall in love and that's it.

At first I thought the girl was only doing that so they could take action because of her...but then I saw she was just mean.

And even being a one-shot, it's deep. Everything got explained (even the title was planned.), and I loved how Takao had long hair to attract Furuya...

Cute.
But way too depressing.