Login to add items to your list, keep track of your progress, and rate series!
Description
Love can be obsessive. Like wanting to rip the wings off a butterfly. Chouko has been in love with Taichiro for a long time. Taichiro and Chouko have known each other since childhood. At one point, Taichiro became very candid and told Chouko that he hated her so much that he wanted to kill her. Even so, Chouko's desire toward him never really changed. One day, a senior in her athletics club confessed to her. Filled with burning jealousy, Taichiro also confessed to Chouko. Their insecure, but very obsessive love begins.

An extra prequel can be found inside of Yoru Koi. 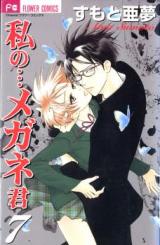 Note: You must be logged in to update information on this page.
Forum Posts Click to view the forum
searching for possesive manga
over 9 years ago
how do i....
over 12 years ago

Sub-par and needlessly crazy
by AnacondaBun
December 19th, 2021, 12:23pm
Rating: 4.0  / 10.0
This isn’t written very well; everyone’s melodramatic and extreme, and the girl is wildly hot and cold and I’m sick of it.
Was this comment useful?  Yes

Weird
by Akatsubaki
February 23rd, 2018, 9:49am
Rating: 2.0  / 10.0
Not for me. It's weird because usually I can read from psychology to melodrama just fine but I reaally don't like this one. I don't like the first chapter. But reading other people's reviews, give another try. And no, I couldn't finish chapter 2. It's too lame, the story. Adding with uncharming characters who have bad personality... both of the MCs and the love rivals.
May be because the story kinds of start in the middle where the characters have already in some sort of conflicts. The author didn't spend time to familiarize the characters to the readers, resulting lack of sympathy toward the characters. The art is kind of 90s style, well... old doesn't men bad but I also don't like the art of this series somehow. This is one of the few series I just couldn't finish.
Was this comment useful?  Yes

OVERLY DRAMATIC!
by andiispineapplek
June 10th, 2017, 12:51pm
Rating: 3.0  / 10.0
You see what I did there? Every little thing is just way too over the top, so much so that it doesn't even make sense. From random crying to random death threats, none of it made any sense. I know the author was trying to make this a dark read, but really it's just two people who have an unhealthy obsessive relationship with one another. The artwork wasn't captivating enough to cover how boring and frustrating this was. Don't recommend.

Obsessive/Possessive love at its finest
by SangMo
May 7th, 2017, 6:57pm
Rating: 8.0  / 10.0
What made this interesting was that it wasn't just one of the people in the couple. The female lead was just as obsessive/possessive of the guy as he was of her. That's what gave this such an interesting dynamic. It's a very twisted romance, but it's not the darkest part.

Spoiler (mouse over to view)
Towards the end, a guy who likes the main girl rapes her and then just gets away with it because he leaves to go study abroad.

Suffocating...LMAO
by noxplum
January 18th, 2016, 7:39pm
Rating: 8.0  / 10.0
Megane-kun needed to calm down and take it easy... the amount of jealousy was just appalling. This story is tragic, especially at the end. Eh, but I liked it though.. I just needed to take a breather every other chapter.
Was this comment useful?  Yes

REALLY obsessive love
by Jasminthe
August 12th, 2015, 12:28am
Rating: 8.0  / 10.0
This is an unusual love story, it's about two characters completely obsessed with each other since childhood, to the point they become very manipulative and sometimes cruel towards each other.

This unhealthy obsession makes the story a bit creepy, but I found it very intriguing and actually really liked it. I feel there's lots of things the author could have done better, but I give it such a good rating for its originality.

I just regret what happened at the end, I would have preferred the story without it. After that, the ending was too quick/rushed, it was a bit confusing.

Spoiler (mouse over to view)
And I hope Chouko won't "protect" the character who committed such a thing just to avoid spoiling his career or something. Too bad we don't know what happened after, as I said, the ending was quite rushed.
And he was surprised and guilty it was her first time, AS IF THAT WOULD MAKE IT LESS REPREHENSIBLE OTHERWISE!

We need more of this kind of love in mangas
by naruto_1493
September 18th, 2014, 2:07pm
Rating: 9.1  / 10.0
Its different from all those mainstream romance mangas. I love this even though there were some instances I found disagreeable. As people say, love is close to hate so I understood the characters feelings since love isn't all about sunshine and rainbows (with a hint of rain). People have a different way of loving and this is just one of them. The guy is a bit crazy but what do you expect when he loves someone so much and is going through puberty? XD

Well..
by Jenangelx3
September 4th, 2014, 8:19pm
Rating: 10.0  / 10.0
It's definitely not like any smut manga I've ever read. I started this when it was first being released and I put it on pause because I got sick of waiting so I finally got to finish this manga. I remember always looking forward to each chapter, but as I attempted to read from where I left off on, it did not appeal to me at all. The plot tended to repeat itself to the point that I just skipped to the last 4 chapters to figure out how it ended and even then, it seemed to have end the same way it was acting out. Although I do not condone his actions, I liked Sakaki because he cared more about Chouko and her future. Megane was so possessive that he wanted to either have Chouko locked up in a cage or killed by his hands so no one else could have her. It's just sick. I liked how twisted and dark it was at first, but over time, it just drove me nuts seeing how selfish they were being. Megane and Chouko are on two different sides of the spectrum. Chouko just wants Megane to look at her and feel proud, but Megane wants her to stop doing everything completely so he can have her all to himself. It's frustrating to read. I am extremely pissed that no one cared about what happened to Sakaki in the end after Chouko heard him scream. Are we just going to ignore that? Wth. The author is a favorite of mine for the dark plots and sad twists. I just wish she thought this out better.
Was this comment useful?  Yes

BAD ENDING
by bubbles0953
May 27th, 2014, 10:23am
Rating: 5.0  / 10.0
After a while the story moves in circles.Different Backround and same problems .The ending was pretty much it may stay the same or it might change but after reading chapters of the same problem in their relationship i know it will stay the same
Was this comment useful?  Yes