Login to add items to your list, keep track of your progress, and rate series!
Description
When his sempai breaks a leg, Serizawa agrees to sub for him at the design firm. He doesn't expect to see Ikuta, a face from his past. Though Ikuta seems as gentle and kind as ever, he doesn't remember Serizawa. But outside of work Ikuta's personality is strikingly different. Is it really the same person, or did Serizawa never know the real Ikuta? 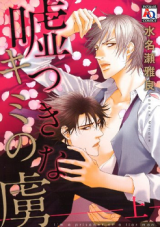 lackluster
by tnwls523
July 15th, 2014, 6:16pm
Rating: 7.0  / 10.0
It's not a bad story but honestly I've seen this plotline several times before. Plus it's not like this one was executed extremely well either. I just don't see anything special here. I like Minase sensei's works but somethings her work lacks depth and this one was especially so. In other words, boring.

Well...
by Kinky-Chan
April 18th, 2012, 12:47am
Rating: 9.5  / 10.0
I love Minase Masara's works, especially Lover's Position but I never really like manga which are drawn from the seme's perspective view. Maybe I'm not used to them but for this one, it's quite nice. The story is enjoyable and I can see how Yoshiki acts like a person who lost his mental conscious but....well...it's just okay. The characters are not bad, Ryousuke is someone who's a little bit pushy but that's what makes him...cool I guess.
Was this comment useful?  Yes

Disturbing hot
by cl4v
February 28th, 2012, 10:45am
Rating: 9.0  / 10.0
I wouldnt give this a 10 because i like Yoshi-nii more than Serizawa as a seme... i love bastards and this one was totally mean but he was in love, there's no doubt about it! i mean he was bad-mouthing Ikuta so he could get him back, that was totally cunning... ahhhhhhh but that kind of egotistical love is a turn on for me <3 and when he slaps him just for saying he prefers Serizawa oh my i almost faint. OK, the story was about Serizawa and Ikuta and of course it was awfully clear they would get together at the end! it had to be like this otherwise we might have killed mentally (there's no other way) Ikuta for getting together with Yoshi-ni and leave the adorable Serisawa. So it's a happy-ending-love-story... Serizawa ends with Yuki, and me keep Yoshi-ni in that memorable hot rape scene.
Was this comment useful?  Yes

good start, but i am worried...
by pleochroic
April 13th, 2011, 11:11pm
Rating: N/A
as of chapter 8: that started quite well; nice interplay between ikuta and serizawa, ikuta's dual personality is fun, there is more (light) humour than usual, and the plot isn't completely recycled -- for the first time in a long while i really enjoyed a minase work. and for a change it didn't have a young, forceful, bratty, immature seme; serizawa is a sweetheart, a genuine nice guy who is yet not a wimp. but that couldn't last, could it, *sigh*. first we get ye olde love triangle, *meh*; wasn't ikuta's promiscuity enough of a challenge? and serizawa's confession came much too early; where the heck did that come from? i would have liked a little internal dialogue at least. and then we need to have a raping, of course, though fortunately not by serizawa. ghods. can she no longer write anything without that? ok, we got past it (way too easily), but what now? the plot just ran into a set of worn-out ruts with everything moving way too fast. well, i am not hating it yet, but i am now bracing myself for that possibility.

weird
by gwisoon
March 22nd, 2011, 12:40pm
Rating: 3.0  / 10.0
I'm with grml on the point that the build-up was promising yet failed to deliver. But the story wasn't exactly typical either- I got the sense that it was trying to be one of those cute cliche story types (which can be really enjoyable if done well)- but the author just seemed to be darting potentially serious issues with humour, and how Serizawa and Ikuta fell in love was truly confusing. I'm not expecting something deep and meaningful but the story just doesn't flow well. On the plus side, the art is easy on the eyes.

eh
by grml
January 26th, 2011, 7:07am
Rating: N/A
I am not fond of Minase at all, but in this I really enjoyed the initial build-up between Serizawa and Ikuta! It was cute; Ikuta continued to be very cold, but Minase would betray his true feelings in certain frames. I also love that Serizawa is such a good guy. Things that ruined this would have to have been the 'If anyone will do I will do' line, which is just too typical, and Serizawa's confession, which didn't have the proper build-up to back it. Things still could have progressed in the way they did without the love confession. The beginning was very promising so I'm a little disappointed that it, as far as I've seen, has deteriorated into something very ordinary and typical, but it's still a worthwhile read.

If you're looking for time killer only...
by kurosu_yuuki
November 23rd, 2010, 11:28am
Rating: 7.3  / 10.0
Okaaay...I didn't like Ryousuke at first because he was gentle and all, but as soon as he got more agressive, I started liking him immediately.
As for the story, it was okay, but I mean, nothing special. Got my attention enough to keep reading until the end, and now I want to know what will happen next, so I guess this is good. But don't expect too much because it's so so...
And Yuuki kinda bothers me, although he isn't those pain in the ass ukes.
Was this comment useful?  Yes

of course, about this one
by xono
March 10th, 2010, 1:39am
Rating: 7.0  / 10.0
Once again, sensei deliver her another material to us. The art is splendid like always, truly what I like from sensei. One may say the story don't come together.It might be slow at first as for the chapters (c4) I've come to read so far, so the story is not that outstanding and thus my rating as of this time. If you like something that's more of faster pace and strong characters build up introduced at first read, check her other works like Gokujou no Koibito, Aishuu, and the like.
Was this comment useful?  Yes

Rehashed but not quite together
by naikan
January 24th, 2010, 4:01pm
Rating: 3.0  / 10.0
Minase Masara's work has been slipping in the past years. She basically recycles some of the same storylines, but in a different environment. This is yet another story that ultimately boils down to a love triangle between the older ex-lover/crush/etc who is no good, and the younger new lover who tells him "forget about ___ and fall in love with me!". If that line sounds familiar, let me refresh your memory:

Between these love triangles and the "rape and fall in love" plots, Minase Masara is fast becoming a two-trick pony. Otherwise, expect from this manga exactly what you have read in all of her other works: pretty art, bishounen, recycled plot, and a happy, smex-filled ending. If that's your cup of tea, go for it, but I personally would love it if Minase Masara tried something new once in a while- oh, and to also stop making her characters wink all the time. It's just unnatural.