Login to add items to your list, keep track of your progress, and rate series!
Description
From Boku-Tachi:

Tesshou is your typical high-school delinquent with a special skill. He has a perfect pitch. This skill enables him to hear things most people wouldn't. After saving a small dog, Tesshou realises his calling in life is to become a Vet!

In 2006, Wild Life received the Shogakukan Manga Award for shounen. 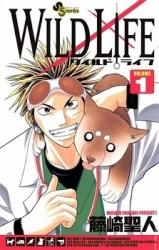 Note: You must be logged in to update information on this page.
Forum Posts Click to view the forum
A really good serie
over 7 years ago

Wild life
by magicstar7
November 18th, 2014, 1:21am
Rating: 10.0  / 10.0
I think wild life is a really good manga, it's fun with a lot of comedy and I especially like Ryotos character and to the ones who say it's to unrealistic, things does not have to be realistic. Personally I like when they are like this

To shonen
by somemango
July 14th, 2014, 1:19am
Rating: 5.0  / 10.0
I read only the first chapters and I don't really like how this is developed. Everything is by far to unrealistic and forced. So my veterinarian serie I will stay with Doubutsu no Oisha-san wish is a level above be it in humour and interest.
Was this comment useful?  Yes

Classic
by liquidsin
May 29th, 2012, 8:48pm
Rating: 1.0  / 10.0
I dropped this series earlier because of its poor art and non-existent plot. Luckily, though, the high rating let me find it again so that I could read the comment on whaling. I was reserved at first with not knowing what to expect, and now I can confidently say that the chapter didn't disappoint.

At least I know now that everything is America's fault. I would have been worried if the author hadn't informed his readers that the United States has a corrupt government, a military that doesn't care about wild life, performs inhumane experiments, destroys peoples' dreams, presses their beliefs onto other countries, and most of all enjoys making poor animals suffer.
Spoiler (mouse over to view)
"Whales are dignified animals with high intelligence; that's why they shouldn't be killed at all cost." This is the West's unilateral beliefs, however there are some who don't recognize this.

Due to foreign countries' pressure, whale fishing is basically prohibited at present. With this incident of ashore whales; all the research institutes don't have much resources at their disposal to investigate this matter.

The LFAS is used by American military to measure the size of warships. The sonar that it emits is a very powerful sound that the brain of whales, dolphins and other marine animals in the surrounding areas gets disrupted.

Well, Shiryou's family has strong connections with the American government. That's why they're capable of acquiring the sonar device.

Formerly, low frequency sound was used to brain wash people. I heard that American Intelligence is performing some human experiments on this.

You see, my father used to be a fisherman who catches whales... Since I was a kid, I dreamt of catching such a huge fish when I grew up. However, ever since whale fishing became prohibited, I lost the urge to become a fisherman.

It's not just Shiryou, the America who's so against the whale fishing here in Japan is currently using the LFAS that doesn't discriminate whether it's whale or dolphin. It will mess up their brains and make them suffer.

Was good
by Artimidorus
April 6th, 2009, 8:36pm
Rating: 3.0  / 10.0
Alrighty, updated my review as of chapter 49 when the mangaka advocated the eating of, and hunting of, whales. It is a sick practice right up there with shark fin hunting. After that, I kind of had to drop it, not that it was really going anywhere. The intensity that I saw in the beginning stayed, but really kind of had no place to go and the series got stale pretty early on.

Amazing!
by Kit451
December 29th, 2008, 12:41pm
Rating: 10.0  / 10.0
As an animal lover myself, stumbling upon this manga has brought me great joy. The main character first comes off as a punk or a no good doer but it all changes! Stick around to read this manga and give it a chance its really good! I'll recommend this manga to anyone who loves animals and wants a good story!
Was this comment useful?  Yes