Login to add items to your list, keep track of your progress, and rate series!
Description
The year is 2028, location in New Koshigaya. A young boy, Isurugi Neru, lives in a poor family and is forced to quit school so that he can find his own way in life. Neru on the other hand, only thinks of one thing: to take revenge on Yagami, a classmate, who's especially gifted and has humiliated Neru numerous times.


User Reviews
Zero One by Master_M2K 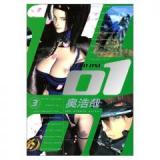 I don't recommend this manga at all because there was no ending at all. People are saying there is a ending but they left so many stuff out that its not even an ending. Don't read this manga because you will be disappointed.
Was this comment useful?  Yes

A really nice manga
by Imou
March 14th, 2012, 4:19pm
Rating: 10.0  / 10.0
I really hate it when some crappy manga are still published out there, but that a rare gold one like this manga has to be discontinued... I HATE IT!
I hope it will get its continuation, because now I'm frustrated and curious to know how it will end.
Even if it is discontinued, I encourage everyone to read it! It's just GREAT!
Was this comment useful?  Yes

Meh, this manga is so unappreciated so much. Just when it was getting to the good part of the meat, it got cut off. Urgh, why did it had to be discontinued? I really hope there's a sequel to it and see how the story turns out and I wonder if he's gonna get his revenge or not.
Was this comment useful?  Yes

Wanna more
by xxkyo
December 20th, 2008, 2:35pm
Rating: 7.0  / 10.0
Artwork is good, almost everyone knows Okus "GantZ" manga. 9/10
Character development almost non-existing and it's the saddest part ~_~ 4/10
Story original, but like everyone says it's SLOW in development terms ant too FAST in time passing. I would have appreciated more chapters about that first girl, as well as boxers story, second girl and that mysterious dead guy [damn... it's supposed to be sci-fi xD] at final chapter. 7/10
It's fast and easy to read, not much action, but somehow for me it was very enjoyable
SO LETS ROUND IT UP TO 7/10, but I would like to give higher grade ~_~

END has good and bad points and NEEDS SEQUEL!
For example it ended way too fast ~_~ new romance story + mysterious dead guy + customized avatar + tournament>revenge?
All that is missing

Good
by seraimes
November 18th, 2008, 2:26pm
Rating: N/A
OMG. Just when it's at the climax it ENDED. I'm so pissed off. It's really good though. I like the author's style. Sighh.....I'm really sad it ended. Maybe when he's done with Gantz and has nothing to do he'll write a sequel to it.
Was this comment useful?  Yes

try to get through
by kamithewolf
July 21st, 2008, 1:52am
Rating: N/A
volumes 1 and 2 didnt really get me interested but i was able to get through them. it really started to get better in volume 3 when more important things started happening. the artwork was good, but the story is kinda slow, no real big conflicts. the manga never really came to a conclusion but the ending was able to satisfy me.... probably cuz the main character got a girlfriend =_='
Was this comment useful?  Yes

it should be continued
by judas1985
November 15th, 2007, 1:36pm
Rating: N/A
in volumen 3 it gets interesting but too bad its over T_T maybe when gantz is over the author should continued with this manga the art is good.
Was this comment useful?  Yes

too bad
by afmart
August 11th, 2007, 12:21pm
Rating: N/A
too bad that theres only 3 volumes, the 1º and 2º are kind of boring but int the 3º it get interesting. maybe its been dropped because of low popularity myabe if the frist 2 volumes where more interesting.... oh well
Was this comment useful?  Yes

Under-Appreciated
by MaccaSvenne
August 11th, 2007, 10:37am
Rating: 7.0  / 10.0
I was kinda hesitant when I started to read this because of the negative comments here on the site.
After reading through the 3 volumes I must say I disagree with other users and their ratings.
Sure the virtual-reality video gaming future has been done before and the ending is kinda sudden but I found it (the ending) oddly satisfying anyway.
The art is nice and the main character is an interesting kid, though the focus is kind of whacky for a 3 vol manga. By that I mean there's a tad too many characters who disappear suddenly despite the trouble the author goes through to introduce them. Makes me think he intended the story to be quite a bit longer.

All-in-all, if you like the author's other works and the not-so-original idea of a future with awfully authentic virtual-reality video-games you should check this out.
Was this comment useful?  Yes