Status
in Country of Origin
10 Volumes (On hiatus) 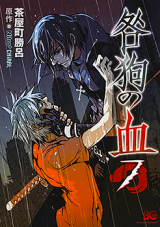 Note: You must be logged in to update information on this page.
Forum Posts Click to view the forum
Manga translations?
over 10 years ago

Quite a disappointment
by Misericordia
July 25th, 2014, 6:26am
Rating: 1.0  / 10.0
The story was just too slow to start and confusing. I am a very impatient person so when a story is boring at the beginning I immediately give up on it.
Having played the visual novel which was very good I was expecting the manga to be a good adaptation but I was wrong. Well the manga wasn't as bad as the anime. The anime was horrible. It cut out so many of the hot sex scenes that were in the VN.
Luckily playthroughs of the VN have been uploaded on Youtube so I recommend everyone to go watch the original source.

So we open up to the first chapter of Togainu no Chi, and there's blood and murder and junk, pretty atypical for a BL story (which I'll refer to it as, since it's based off a BL visual novel). Then there are some guys who are watching the carnage and loling about the smell of blood and puke and other such delicacies. Alright. Then there’s talk of some sick-ass tournament where people kill each other and the goal is to not die, kind of like what the gladiators did only a bit more cyberpunk. Then there's a lot of name-dropping and character introductions and some more violence. And THEN there are a few (read: three) two-page spreads that info-dump all the particulars of this post-apocalyptic Japan and How We Got Here and all that exposition-type stuff. After that, we're in a random bar with a ridiculous amount of characters who are all on the verge of being horribly suffocated by their own dialogue balloons (seriously). And the scene changes, and there are a bunch of gangbangers all congregating at the house of some obvious mafia-lord-dude-thing who keeps a human male as a pet dog. Which, you know, is a pretty horrific yet intriguing concept that will probably only ever be explored for fanservice reasons in this manga (it’s THAT kind of manga). Finally, at the very end of the first chapter, we are at last introduced to the protagonist guy... sorta.

If you're confused by that description, welcome to the club. I don't feel like being elaborate today, so to state bluntly everything that's wrong with this manga (in my, of course, very humble opinion): the art is lackluster and weird (and looks more seinen than shoujo), characters are introduced way too fast, world-building is crammed into three pages of dull description, there's waaaaay too much dialogue that attempts (awkwardly) to explain the story's world to the reader, atmosphere and tone aren't developed outside of random bloody shots of alleyways, the characters already feel insipid and uninspired, EVERYONE is gay and built off your typical BL tropes and clichés, the art is too dark to tell what's going on half the time, the dialogue is boring, there are too many characters to keep track of, the overall pacing feels rushed, the premise isn't exactly unique and comes across feeling pretty contrived, and to top it all off, there is very little emotion to be found anywhere, so it's not likely you're going to be rooting for any of these sociopathic bastards any time soon.

So, sure, maybe it gets better and some of my complaints are addressed and remedied, but honestly, it was just too boring for me to continue on past half of chapter two (and that was with me skipping a lot of the tedious dialogue). If you have nothing better to do or are just really into gruesome BL-esque stories, maybe you'll like it. As for me... Well, just do a search in the "yaoi" category on this site. I've got places to go and pages upon pages of crappy smut to read.

I LUV IT!!! but where's the rest???
by Mushypeas
January 18th, 2012, 11:58am
Rating: N/A
I really love this manga very much, but i hate it when the manga websites never update them even though it has reached so far you want to know more. I used to read the manga on youtube because it was available til chapter 31 in english!!! but then the person who posted the vids made them private and it was only a few months before he posted vol 7 which i was looking forward to

AND then the scanlators of togainu no chi, tokyopop claimed they are shutting down the business in america for God knows why and that really shocked me to bits, so we now have to rely on other scanlators from all over the world. I actually tried looking everywhere to find the new chapters but nothing ever came up

) while naked!!! (either vol 7 or 8) and with that i think buying the manga series on Amazon or any other website is better, even though it stopped at vol 7 for the mean time. But i wish someone out there has an interest on togainu no chi and take over the project to get us fangirls some more action

and some more of Shiki and Akira together too

(also go to youtube to listen to the CD Drama of Shiki x Akira cuz you can hear Akira's moans when Shiki sexes him up).
Was this comment useful?  Yes

Ugh!
by Zidlijan
December 6th, 2011, 8:44pm
Rating: 1.0  / 10.0
Ihate this manga, there IS NONE NO translation after chapter nine and i see how people talk about akira being raped by Il-Re and stuff and all that... Where did you find the translations?! or more like, you read japanese?
after i searched for months and noticed this manga has gone ignored since 2009 i feel very frustrated because for me there's just no way to read it grrr e_e i hate you togainu no chi, a lot
it's not to be trolling or cruel but SERIOUSLY e_e
Was this comment useful?  Yes

I like it!
by redlinks
December 4th, 2010, 5:04pm
Rating: N/A
This is going to be one of those series where you like it or don't like it. The setting is very dark and horror-like. There's lots of violence and action! I would highly suggest this to those who are just starting to get into BL. As others have said, the BL goodness doesn't really start until about vol.8. And that would be my only complaint that the romance is a bit slow. Otherwise, I love all the action!
Was this comment useful?  Yes

Content
by Tisiphone
November 13th, 2010, 6:23pm
Rating: N/A
This story is very dark and can make you feel quite queezy. Despite what other comments have said, this version IS BL, though it doesn't get to it until volume 8 because
Spoiler (highlight to view)
the story implies that Akira gets raped by Shiki.
Was this comment useful?  Yes