Login to add items to your list, keep track of your progress, and rate series!
Description
Car mechanic and ex-yankee Honda falls in love with Someya, a beautiful okama. Someya promises to go on a date with him in exchange for free car maintenance. Someya planned to tease him since the mechanic was unaware of his true gender, but when Someya reveals the truth, Honda's attitude doesn't change one bit! And now Honda's acceptance has stirred up feelings of affection in Someya! 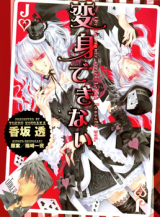 Soumuku Kanou who? I only know Honda the mechanic
by Estara Saveria
May 27th, 2022, 1:37pm
Rating: 9.0  / 10.0
Alright, at first I thought this is just another your 'no homo' run off the mill yaoi manga with some sexy scenes thrown in. But hoo boy, am I wrong abt that.

Honda is a simple character yes, but he is also a very lovable man who is honest to a fault and is not easily swayed by what other people say. Even when numerous people warns him abt Someya being an okama, he sticks to his principle and comes to love Someya beyond his looks and appreciates him for who he is anyway. Honda might look intimidating asf, but he is actually a pretty gentle guy who respects Someya's wishes and feelings, unlike another top we know (*ahem* Kanou *ahem*).

Now on to Someya. I love love his character design, but most of all I love his complexity. Someya tries to act all cool and unbothered, but it's obvious that other people's comments are getting to him.

Behind his glamorous front, exists a vulnerable side that's begging someone to love him as a whole-- not just as a beautiful okama or an ordinary bussiness guy, but both. So to see him finally finding love and acceptance in Honda is a very touching moment.

Anyway, I can talk all day about how good this manga is even if it's old and seems cliche lol, but point is that this manga is different from Okane Ganai and u totally should give it a try 👌

Better than Okane ga Nai for sure
by HanaChou
January 7th, 2016, 9:00am
Rating: N/A
Though that alone doesn't mean a lot since Okane ga Nai is kind of in its own league when it comes to illogical plot. The story is cliche and cheesy but heart warming, and Honda is, though nothing too interesting, a much more decent human being than Kaoru. At least the author tried to deliver a positive message here. Someya is portrayed as a (surprisingly) sophisticated character, and as he received love from Honda he came to love himself too. Overall, this spin off is so much easier to read than Okane ga Nai
Was this comment useful?  Yes

So sweet!
by Himitsu-chan
November 2nd, 2015, 12:52pm
Rating: N/A
The story is amazing, about how you want to be acknowledge, about how you want to change. Tho it's not that deep but oh man! They are so sweet ! Even though the story is short and they finally confessed on about 3-4 last chapters the way they confessed is so sweet! They used the marriage vow kyaaa! And when the okama workers saw Honda holds someya's waist i'm screaming in my mind! The scene is so perfect(for me). The art is good, someya's outfits are glamorous and sexy. Btw i'm planning on reading it's main manga okane ga nai(?) i'm really curious to aya-chan he is so cute but the difference in height with his lover is disturbing lol.
Was this comment useful?  Yes

Urm.. No.
by OmNom
August 4th, 2014, 11:33am
Rating: 1.0  / 10.0
So people have gone crazy about how 'great' this manga is and I couldn't help but feel curious how it differs from Okane ga nai like others have said. Quite a lot I must admit, so much so that it seems the majority of yaoi readers had been fooled to think this is a good manga. Yes it's considerably BETTER than the original series, but certainly no where near great, maybe average at best. The clichéd story is already boring enough, while the mediocre characters that fall in love for no reason doesn't help at all with their exaggerated reactions and dull development. Even the humour is of bad taste. Maybe only the improved artwork has a bit of merit. Problem is there's no shota non-con here like Okane ga nai so all of a sudden people think consensual sex = great love story. No, wake up please.
Was this comment useful?  Yes

I really liked it
by JapanRocks
January 15th, 2014, 11:02pm
Rating: 9.0  / 10.0
As someone who is terrified of trying Okane ga Nai, I tried this fully prepared to drop it if things got weird/ too intense to enjoy. To my surprise this is really really good!! It was just a really interesting read and by the final chapter I was actually curious enough to try it's mother manga. I like the comedy and the characters and wouldn't have minded if it continued for longer.
Was this comment useful?  Yes

wow
by badmoonligh89
June 24th, 2013, 4:50pm
Rating: 10.0  / 10.0
I cannot express how much I love this manga. I hate hate hate hate Okane ga Nai with every fiber of my being. But this story is just wonderful and I love that it deals with identity issues and how we see ourselfs. Plus it's very funny.
Was this comment useful?  Yes

I really wish that this series continues because this is soooooooooo good!!!!
even though its a spin off from okane ga nai, this story has depth and meaning..
It's a totally different story and can be considered seperate and independent...
I can really empathize with the characters...
It gives the lovey-dovey feeling, like when you're first love comes...

Surprisingly good
by sallyen
April 3rd, 2013, 10:19am
Rating: 8.0  / 10.0
I really liked the story; really funny with a splash of a sad past. I could have skipped the latter and have only focus on the humor part, but it was surprisingly good manga. The characters are both two strong and stubborn males so that was refreshing.
Was this comment useful?  Yes

???
by varianthart
January 19th, 2013, 11:24pm
Rating: 6.0  / 10.0
I thought I'd give this a shot even though I absolutely loathe okane ga nai. It was definitely better by far, but still thoroughly average. Although we get to learn a bit about Someya's past, there isn't much to it and we don't get to know much else about him, nor are we told much of anything about Honda. The characters themselves are flat and although I don't find them horribly off-putting(like with okane ga nai), I don't find them particularly interesting or appealing either. The story is forced and unrealistic, without much else to offer in terms of entertainment. I did not connect with the characters nor do I understand how or why they fell in love. Just not my cup of tea, but it wasn't the worst thing I've ever read and it was nice to see that there was no rape or shota-esque boys being abused.
Was this comment useful?  Yes

Hated Okane Ga Nai
by 801crazed
December 11th, 2012, 1:27pm
Rating: 6.8  / 10.0
I absolutely detested Okane ga Nai, but surprisingly this spin off was not so bad.
There was no rape or wimpy/cry-baby characters here.
But the reader has to keep in mind that Someya is not transgendered; he cross-dresses as way of expressing himself.
Was this comment useful?  Yes