Login to add items to your list, keep track of your progress, and rate series!
Description
Host x Dentist!

"What kind of face is this guy making under that mask?" 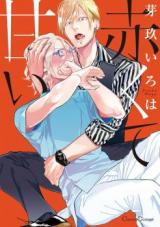 Good for a quick read.
by kidoraku
August 25th, 2018, 12:48pm
Rating: 6.0  / 10.0
The story is a little too plain to be above average. There's something not quite right with the storytelling, like I had no idea why uke hit the seme and it happened a couple of times. Our handsome host didn't do anything that bad to deserve a punch. So, yeah, "moody" is a good word to describe the uke dentist. There's that and the lack of background for everybody (you won't know what's their hobby, were are they from or if they have a family). In other words you can't call this manga brilliant cause it's lacking in too many aspects. But I don't hate it. Also the art is very nice and sex is really well done. It's good enough to kill some time with this work.


One more thing, Chieko is a bitch, heartless, fickle and vicious. She kicked out her boyfriend without a single word of notice, without giving him time to find a new place to stay - not even one damn day - and on top of she kicked him out in the middle of the night, right after he got back from work. Not to mention that afterwards she badmouthed him, she kept meddling at his back and almost destroyed his relationship with a new lover. She's a bitch, no doubt about it.
Was this comment useful?  Yes

So-so
by OmNom
July 30th, 2018, 6:00pm
Rating: N/A
I don't think I was particularly impressed about anything this manga offers; I feel like the execution isn't convincing enough to sell the story to me. It has this moody and brooding atmosphere hanging over its head which never quite went away and somehow made me feel tired reading along, you know? I didn't really like the characters that much either despite the mangaka's strenuous efforts to drill it into readers' heads over and over again about how cute or good-looking or whatever they are. They just lack some sort of charms, I suppose. Again, I think a lot of this has to do with the execution too, and this is just a personal preferrence but I do not like the art designs for the uke.
Was this comment useful?  Yes

Wonderfully Sweet, and Funny
by FeyFujoshi
July 26th, 2018, 8:08am
Rating: 10.0  / 10.0
This is an extremely lovebale series with an interesting slew of characters, well thought out dialogues, consistent and fleshed out characterization, along with good artwork, and an interesting paneling sense, which tremendously enhances the manga’s appeal by making the plot flow, twist and turn, gracefully. Oh yes, and the smut is pretty well done as well.
If there’s any downside to it then, it’s the air-headedness of Noda-sensei, in how he complies with Fukishima’s requests, which came across as a bit counter intuitive to his characterization for me, however he was quite lovable with this characterization as well. Besides, Noda does have a strong characterization as he takes his own ground, does not always and without thought give into Fukushima’s requests, and is quite explicit about his own desires and what kind of relationship with Fukushima is acceptable/unacceptable for him.
And, while I strongly suspect that most readers might disagree with me. the most lovable bit about this manga was how the women, Chieko specifically, wasn’t a bitch.
Was this comment useful?  Yes