Login to add items to your list, keep track of your progress, and rate series!
Description
1-3) Sweet Bitter Candy
Kawaguchi spent his entire life in high school as the short chubby kid, "Chidebu". His one secret was his admiration of the rebellious, openly gay Kanaya. Five years have passed and now that Kawaguchi has lost the weight (but is still short), does he have a chance of catching Kanaya's attention?

4-5) Wait a Little Longer
Student council president Tone is used to being a slave driver, and he's sure being stuck with overly persistent kouhai Ninomiya is just another cross for him to bear. After all, Ninomiya already confessed to him and he's only joining the student coun... More...
1-3) Sweet Bitter Candy
Kawaguchi spent his entire life in high school as the short chubby kid, "Chidebu". His one secret was his admiration of the rebellious, openly gay Kanaya. Five years have passed and now that Kawaguchi has lost the weight (but is still short), does he have a chance of catching Kanaya's attention?

4-5) Wait a Little Longer
Student council president Tone is used to being a slave driver, and he's sure being stuck with overly persistent kouhai Ninomiya is just another cross for him to bear. After all, Ninomiya already confessed to him and he's only joining the student council to be close to Tone. But even though Ninomiya turns out to be a great worker, Tone relax around him...

6) Just as God Said
Two long-time lovers face a heart-wrenching breakup when one of them decides to get married.

7) Sasoku
A mangaka doesn't want his new assistant to fall for his secret lover. Less... 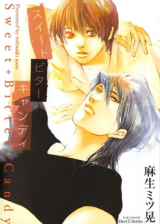 I think the 2 one shots at the end were better than the 2 longer stories.
Was this comment useful?  Yes

Embarrassed
by Airendy
August 12th, 2014, 7:16am
Rating: 6.0  / 10.0
I did not like, I embarrassed .Don't were those characters you like and even a manga I want to read stories of novo.As were half stops and not call atenção.I throught the donkeys characters ...
Was this comment useful?  Yes

Wah so adorable
by OmNom
September 17th, 2013, 11:45pm
Rating: N/A
So the first story didn't do much for me. Although I don't hate it, it did get on my nerves a little. With that type of story, usually either the mangaka does it right or screw it hard. I won't say Asou Mitsuaki failed this time but the story definitely isn't going to stay in my book.

The remaining stories, on the contrary, are much better in every aspect: settings, characters, executions, events. They just feel right, like everything is in its rightful places. Gotta say I enjoyed them much more than Asou Mitsuaki's later work Tear Drop. I used to avoid her just because of that manga - I'm glad I decided to give it another chance.
Was this comment useful?  Yes

Awesome!
by Namiya
July 16th, 2013, 2:46am
Rating: 10.0  / 10.0
As others have said, it's refreshing reading this!
It has a somewhat realistic view on things with a hint of humor; scenes that make you sad and scenes that make you chuckle... it's great at conveying the emotion the characters feel!

While character expressions (and the mangaka does them all wonderfully!) and the different emotions they go through in various stages of relationships are playing an important part, there's still very well made, hot steamy sex scenes!
I feel that a lot of BL has either or, but not many can combine the steamy sex scenes with everything else, yet this mangaka does it effortlessly!

I'd recommend this to anyone. Seriously, whether or not you love BL for the stories, or for the sex, or you just want an entertaining read full of emotion, read this!
And read the mangaka's other works too while you're at it, you won't regret it!
Was this comment useful?  Yes

Not as cliche, quite refreshing.
by Suiren-nyan
May 18th, 2013, 12:58pm
Rating: 9.0  / 10.0
I find this manga quite refreshing, both in art and storyline, especially the first story-- it's very original. The uke is super adorable, even before his weight loss-- and it's rare for a yaoi character to be fat, so I find him to be quite unique. The seme is cool, also a memorable character.

I don't like the 2nd story as much, it bored me a bit, but I like all the other three so it's all good

The last one is super sexy.

There are some very hot, naughty sex scenes. Not boring at all.
Was this comment useful?  Yes

Very Nice!
by Dezi
December 12th, 2012, 2:11am
Rating: 8.0  / 10.0
Don't let the messy art of the cover fool you. The art in this manga is quite nice. The stories as well. They were very nicely executed and - in my opinion - heartfelt. This was a very good read. Each story had something special and they're all on the same level ratingwise.

Awe-struck !
by Kleineputchen
March 4th, 2012, 6:26pm
Rating: 9.0  / 10.0
This manga really left me awe-struck, I seldom read manga so breathtaking. Well, I may be a bit exaggerating, but it's true it's rare for a manga to touch me so deeply, I was on the verge of tears, which hardly ever happen. I actually cried only once over a manga (which was Sojou no Koi wa Nido Haneru).

First I have to say that it's not a manga you'll read for its beautiful art, original plot or sexiness. Why would you read this manga you're gonna ask me then. Well, for several reasons. The first one is the art, though it's not what you could call a beautiful art, it has this little something that hooked me.
I think it lies in the expressiveness of the characters, the angles choosed for the scenes, the way it looks sometimes distant or blurry, making you feel like you're peeking into an intimate situation (specially in the first story). It feels like the author care for her characters with a lot of sweetness, holding them gently in her hand. It's hard to explain since it's very subtle, but before being really into the story I was already into the art.

The second reason is the storytelling. Like I said it's not original plots you have here, but it's not lacking sense, or being dimwitted, on the contrary. The emphasis is put on the feelings and emotions, and it's very well done, they feel real and are really well conveyed. It's not something you read to know what's going to happen, but to feel the ambience and the inner thoughts of the characters.

Even though it's short stories, the psychology of the characters is deep, subtle, and well developped, which is something I'm hardly ever totally pleased with but here it was just perfect. It feels like they're human, with emotions they don't know how to deal with, stupid reactions they wouldn't like to have, clumsiness, and it makes it so sweet and bitter at the same time like in the title. Usually you feel more attracted to one of the characters, but here you end up wanting for each of them to overcome their issues, and feeling close to them.

The first story is my favorite one, it's so heartwarming and sweet, I thought I was gonna melt. How can you not immediatly feel sympathy for this little Chidebu, and want him to be loved. It's rare to see that kind of theme (love beyond appearances) treated in yaoi manga. The two following ones are very sweet and akes your heart flutter as well. And they also have this realistic sense towards homosexuality which is agreable.

The only thing I didn't like was the last story. I found it too rushed, and it makes it hard to understand the way they're acting or their emotions, and doing so you miss half of the story. And it's more rough than the other stories, which breaks with the general tone in this manga. That's the reason why I didn't give it a 10, but it's not really important since it's just a little story at the end.

So, in conclusion, I more than highly recommend this manga !!

Fantastic
by MangoLuve
March 3rd, 2012, 3:23pm
Rating: 10.0  / 10.0
I dont usually give 10's but this manga struck me as somehow incredibly beautiful. Despite its semi-cliche story lines, the beautiful art combined with the emotions executed by the charecters made it that much better. Each panel has so much feeling to it and i feel this mangaka did an exceptional job. I read this manga in one reading and i particularly liked the first story and the story about the guy getting married which made me cry so much even though it was about half a chapter long. This manga is great!
Was this comment useful?  Yes

So much fun! I wish there was more...
by sofistree
September 8th, 2011, 9:20pm
Rating: 9.0  / 10.0
Pretty much loved this the whole thing. Loved the first story, Especially when the jerky kid in the beginning was kicked down the stairs. Classic.

The first story was great. I usually like ukes with a little more confidence (or a LOT more), but this one was adorable and so I liked him.

LOVE the art. It's clean and clear, and this author draws body posture magnificently! I especially love it when the boys hunch over to look at something. It's realistic but stylized. So good!

The second story was SO cute. I liked that uke better. And the line about telling the seme to 'act his age' because that's what he likes about him was great! I like this one best, I think.

The third one broke my heart and made me angry. WHY can't people just love and marry whoever they want (as long as everyone is a consenting adult, who cares)? I'd be freaking pissed if society told me I had to marry someone I didn't love and wasn't attracted to. Anyway, this one's short but good.

And holy crap, the last one was freaking HOT! And cute, too! I love thing with the mangaka giving his boyfriend a ring to ward off girls. And the retaliation is just the best!

Read it! It's great!