Login to add items to your list, keep track of your progress, and rate series!
Description
From Operation Boredom:

Now that Misuzu and Masahiro are together, it seems like things couldn’t be going better for them. But can teacher and student really have a normal relationship? The odds are against them when it seems that there is trouble once again heading their way, especially when Kazuki hasn’t quite given up on destroying their relationship… can Misuzu and Masahiro’s relationship really survive through all this? 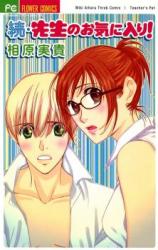 Note: You must be logged in to update information on this page.
Forum Posts Click to view the forum
Aihara miki
over 9 years ago
Teachers pet
over 13 years ago

No really, I hated this manga since the begining at the end. It's just Rubbish !!!
Was this comment useful?  Yes

Spoiler (mouse over to view)
she ended up with the older brother again.

Spoiler (mouse over to view)
they didn't exactly "end up" together. She was...f******...cornered. Okay? That was, by no stretch of the imagination, "ending up together." The older brother ended up having zero respect for her and treats her like a kept prostitute in the end. I mean, would you consider it a good thing that he tells her to drop 'em and spead 'em and do her without an ounce of care? Not even lust, initially? Seriously?

I think that Misuzu was an unfortunate character on 2 major accounts:

1) She was a complete dumbass and a push over.
2) She was faced with the misfortune of having met either of the two brothers.

But I guess if you can consider the fact that not one of the three of them were all that sane, then those two points could potentially be applied to either of the three of them. One could argue that the oldest brother wasn't that bad, but you know... his reaction in the end kind of blew the lid right off that assessment, so yeah. He was a nut job, too.

Someone commented that the way the story ended showed that there was justice in the world. Well, if the way that this P.O.S. ended is considered justice, then maybe we should all be worried.

love it!!!
by carter9338
October 11th, 2013, 4:36am
Rating: 10.0  / 10.0
Spoiler (mouse over to view)
Man all i can say is thats karma little brother you rape her to get her an then your brother blackmail her to keep her. To me that was a good ending the only thing that could made it better is if little brother had a girl that liked him an the big one took her to.To me this says that there is the justice in the world. I know some of you hate what im saying but she was with him in the beginning....
Was this comment useful?  Yes

WARNING: The ending to this manga may induce sudden fits of homicidal rage and anger induced yelling at a computer screen. To avoid these side-effects please seek a different manga entirely and discard this one in your DO NOT READ file.
Was this comment useful?  Yes

Spoiler (mouse over to view)
...was raped by the younger brother in the first book (and he totally looks like he only weighs about 90lbs, so why didn't she fight him off?), and she falls for the little dick. Then in the second book, the older brother, who she was originally dating in the first place, basically blackballs her into marrying him. And how does their marriage start off? By him saying "Lower your panties and place both your hands on that wall behind you..." and from there, screws her like a $2 whore.

*Sigh* This woman is not very bright about picking lovers, is she? I really dislike this series. Maybe if Misuzu would have been replaced with a blow up doll then the story might have been more likeable. Goodness know the doll would have had more personality than her. And don't even get me started on those completely-screwed-in-the-head, rape-monster brothers.

In conclusion, none of the characters in this series are likeable, for one reason and one reason only: they're all f***ed up in the head...IMHO.

This series is an absolute train wreck from beginning to end. Good grief...

THE END WAS WAY OFF!!!!!!!!!!!!!!!!!!
by KIDDofmangastyle
February 22nd, 2013, 7:14pm
Rating: 10.0  / 10.0
the end was so dark i mean the older brother was obligated to fight for her but he only saw her as a toy to meet his needs. His overall goal the whole series was to watch his younger brother suffer. but his younger brother only wanted to stay with the girl but oh no his brother could't see him succeed at a attempt of happiness he played his part as a devil takeing away the only thing that he loved and he did so smoothly that his younger brother could't see the end that was comeing he could't perpare for the comeing doom plot his brother set up oh how i weep for those who can't notice the plotting of there own downfall. but its beiter sweet if you see your downfall comeing and your hands are tied so you cant stop it. LONG STORY SHORT THE END WAS ANGER INDUCING.

*Barf*
by NessLaReine
December 1st, 2012, 3:02pm
Rating: 3.0  / 10.0
seriously, putting aside the disgusting way the relationship of our two lovely protagonists "bloom"
Spoiler (mouse over to view)
(A.K.A by the EXTREMELY CREEPY "rape then love" strategy)
the whole thing was too ridiculous. I usually don't mind plots being sacrificed for hot action when i'm reading smut (smut is meant to be read for that, after all imo). But for some reason this time the whole thing, includng the smutty scenes, felt forced down my throat, and it tasted pretty horrible. Not one character was likable, and that ruined everything. It might also be because shotacon is not exactly my thing. one of the characters is supposed to be the "sadistic" type, but he felt way too robotic and stiff (not to mention his face looks like a triangle, with a pointy chin and everything -_-). I dunno... seriously I thought it was pretty damn awful. And I've read Some pretty bad smuts before, mind you.

EDIT: well shoot...that was it? was it axed or something?
Spoiler (mouse over to view)
presumably she chooses her psycho ex for his money to give us the illusion that this manga is "OH SO SMART AND REALISTIC OMG!!!111!" ...not buying it
the ending sucks as much as the entirety of the manga. If the manga accepted itself as silly, fun smut then it would be A-OK but the ending was too weird and LAZY

Loved the ending!
by buenro-olga
September 26th, 2012, 2:34pm
Rating: 9.0  / 10.0
What a fun manga to read. And the ending was just perfect specially with its abruptness. I have NO IDEA what the heck are some talking about this being an unhappy ending. Other than the fact that they may be 15 year olds with a hots for teacher themselves, the ending for any other normal person, will be just perfect.

Here is what you get with this awesome ending
Spoiler (mouse over to view)
She stops being a child molester and a bad teacher. She gets away from her rapist. She saves her father's company. She gets married into wealth. In fact the only little picture they missed out on was when on the last frames she is getting rammed from behind by the rich fellow, they should have done a close up and seen her with a little wicked smile. Pure awesome i tell you.

I didn't expect much but was glad I kept it up to the end and was reward so handsomely. So realistic, so great.
Was this comment useful?  Yes