Login to add items to your list, keep track of your progress, and rate series!
Description
1-2) I Love You Too Much
Sweet story about Kouji's secret love for his friend's younger brother Mizuru. He is satisfied with any chance to spend time with Mizuru but one day, he suddenly realizes that his time with Mizuru will be coming to an end. Will he finally confess his love or will he let this love remain buried? Story also published in chapter 5 and 6 of Kagakushitsu e Douzo.

3) Cruel Love
Kiichi's parents died when he was a child. For the past ten years he's lived with his uncle whom he loves. Even though they have sex Akumitsu never tells Kiichi he loves him. Is Kiichi just a toy?

4) ... More...
1-2) I Love You Too Much
Sweet story about Kouji's secret love for his friend's younger brother Mizuru. He is satisfied with any chance to spend time with Mizuru but one day, he suddenly realizes that his time with Mizuru will be coming to an end. Will he finally confess his love or will he let this love remain buried? Story also published in chapter 5 and 6 of Kagakushitsu e Douzo.

3) Cruel Love
Kiichi's parents died when he was a child. For the past ten years he's lived with his uncle whom he loves. Even though they have sex Akumitsu never tells Kiichi he loves him. Is Kiichi just a toy?

4) School Scandal
Uemura is the only one who treats his classmate Atsushi like a friend instead of star actor. But is friendship all Uemura feels?

5) Am I Your Dog?
Kei is considered a troublemaker at school, so when his sempai Kagami catches him smoking Kei has to do what he says, or risk getting expelled. But to be sempai's pet dog? And how is Kei's brother involved?

7) Love Facism
Rui is dating Yuka, a very pretty girl from his school. Then he meets exchange student Tooru. Tooru and Rui had a relationship in the past, but that's all over, right? Less... 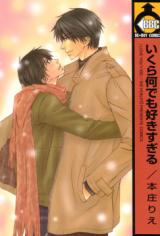 Rapid Descent Downhill
by Caedis
July 3rd, 2017, 11:26pm
Rating: 5.0  / 10.0
1+2) The first story was cutesy if not unoriginal. It falls under the classic trope where both parties are unknowingly pining after the other. It was short and to the point enough to be semi-enjoyable even if the characters have no personality outside wanting to frickle frackle. (This one is actually the main reason I read this manga.)

3) Next we have a nephew-uncle relationship featuring the ever present insecure uke coupled with an aloof seme. This one was a pain to read. I truly had to trudge through it. And, no, it wasn't because of the incest or blatant abuse of power over a child. I can suspend my belief of this being fucked irl just fine, so the incest and events surrounding it don't squick me.
Spoiler (mouse over to view)
(Ignoring when Kiichi got reaffirmation that Akimitsu had always liked him from looking at a picture of them together when he was a baby. The connotations, euugh.)
What made this truly crappy was the choppy storytelling and just overall odd plot.

I'm also sensing a pattern with the undeveloped characters.

4) Another fairly unoriginal one. There's an actor going to a college and some guy is the only one who treats him normally. Yada yada yada, actor gets saved from a rapecreepy senpai who should be jailed but the actor is all nonchalant because "male bonding" (can you tell this bugged me?), then they kiss. Basically.

5) This chapter is a whopping le sigh. It's also a sufferer of the STD going around in this manga called "clichéd bullshit". Uke is a rebel (YOLO) who gets caught doing rebel-like things by the senpai seme. Seme makes the uke do punishments in order for him not to tattle (like a little snitch) and says the uke is like a chihuahua to him. Just, y'know, one he wants to blackmail into having sex with him. As an added bonus (lol) the brother thing was obvious and annoying.

6) Ahh, finally one that's reminiscent of the not-so-terrible first chapter. It's super short (abt. ten pages), kind of funny, and a little cute. It's also hella confusing and nonsensical, but, eh. ㄟ( ・＿・)ㄏ

7) The synopsis for this one gives the illusion that it's going to feature ex-boyfriends, when in reality it's just about two boys who had one fairly chaste (← used loosely) fumble in junior high. (The translation says third year of high school but that would make no sense and they looked like they were about 13-14, so. Junior high.) I thought it was pretty decent but then the ending happened. Now I just find it annoying.

Not for me
by varianthart
November 26th, 2012, 4:38pm
Rating: 6.0  / 10.0
This would probably be a good choice for younger readers, but it didn't appeal to me. The stories were rushed and often very cheesy/unrealistic. There were a few panels that struck me as so bad that I laughed audibly. I did enjoy chapter six though and the first story wasn't too bad if you ignore a few moments.
Was this comment useful?  Yes

Really sweet
by Narufan1st
July 25th, 2012, 4:01am
Rating: N/A
To me the best ones were cruel love and love facism
A first I didn't get what happened in the end but it was obvious he broke up with her
Overall I really like these stories and to me they are not forgettable but I don't think I will read them again till a while has passed and I forget about them
Was this comment useful?  Yes

Good
by Namiya
July 14th, 2011, 3:13pm
Rating: 8.0  / 10.0
The stories are sweet and the art is good as usual. I liked that there was more emotion, especially in the first story, than often in yaoi. I haven't read many stories where the seme is seriously worried about hurting his lover, which was a big positive surprise to me.
Was this comment useful?  Yes

Meh.
by Poemi
May 9th, 2010, 9:24pm
Rating: 7.0  / 10.0
Some of these oneshots are better than others, imho. I thought the one about the main character liking his friend's brother was the best. I guess I like the longer stories cos they're usually more well developed. Good to pass the time though, I suppose.
Was this comment useful?  Yes

I didn't get Love Facism though...what happened? What was the conclusion?
Was this comment useful?  Yes

Well Worth a Quick Read
by MightyMaeve
November 7th, 2007, 10:46am
Rating: 6.0  / 10.0
If you need a time filler or just a break for work, this is (BY FAR) a better way to spend your time than watching some inane sitcom in my opinion! I enjoyed these stories, but they are ultimately forgettable. The only two that I would go back to read again or think upon again would be Cruel Love and Love Facism. Cruel Love because it challenges the reader to expand their rigid rules of what constitutes an 'acceptable' relationship. Love Facism because it deals with the question of how we stop ourselves from learning and embracing our true selves because of fear of the unknown or fear of what we've been told by society.
Was this comment useful?  Yes

Ikura Nandemo Suki Sugiru
by angelkurisutin
August 19th, 2007, 4:48pm
Rating: 8.0  / 10.0
A bunch of cute oneshots. I must say I liked some much more than others. The last two chapters were kind of bleh, and some may not like the idea of an uncle x nephew pairing (I don't really care, I don't think about it) but the rest were cute, and I like Honjou Rie's art. ^_^

surprised
by LadyKadaj
August 19th, 2007, 8:11am
Rating: 8.6  / 10.0
Spoiler (highlight to view)
surprised... i felt this manga deserved a higher rating at least for the variety of stories here but then again, these stories may not be really suitable for everyone... I'll just summarise it without giving too much away (I hope)

Chap 1 and 2 Kouji x Mizuru explores the sweet gentle side of love, when Mizuru one day confesses he likes Kouji and how they come to terms with their feelings.

Chap 3 titled Cruel Love is Akimitsu x Kiichi where it explores the insecurities of love, and how it is a taboo in society not only because they are both males but becos they are related.

Chap 4 titled School Scandal Uemura x Atsushi is about how a star actor tries to cope with his school life, while everyone (except seme of cos) treats him differently. all he wants is to be treated normally, like a regular student and of cos it happens when he meets our sexy seme...

Chap 5 Kagami x Kei is about how Kei is being blackmailed, and how it deepens into something further for his "master?"

Chap 7 Tooru x Rui? This story I like the least in the series... I dont want to say too much as the reason wld be a big spoiler but you just read it and see if you agree with me k?

Wow I actually wrote so much in this review... hmmmn
Was this comment useful?  Yes