Login to add items to your list, keep track of your progress, and rate series!
Description
From Forever More:

After being told that his dad passed away, Souichirou came back to the house which was his home 8 years ago, and there he found out about the existence of his 2 older brothers, the eldest - Masato and the younger - Kaname. In order to receive rights to the house, Souichirou has to live together with them, and despite the chaos and arguments, it's fine by Souichirou if it means he can get the house. But one day, he accidentally sees Masato kissing Kaname... 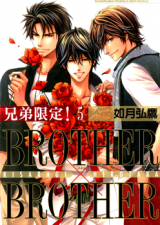 
Category Recommendations
Persona 4 dj - The End of The World
Cut
Aitsu to Ore.
The Husky and His White Cat Shizun (Novel)
Yureru Nureru

Note: You must be logged in to update information on this page.
Forum Posts Click to view the forum
whos the uke/seme??
over 11 years ago

Verrrry old school
by TheOneWhoGotAway
May 11th, 2022, 9:07am
Rating: 4.0  / 10.0
The art and story is very old school. It's either a hit or miss for these ones. And for this specific one it's a miss for me. Too much high drama like some telenovela. I don't like telenovela.
Was this comment useful?  Yes

Alright
by Careena
December 30th, 2021, 8:09pm
Rating: 6.0  / 10.0
I read it in the context of its time and genre, but I still could not forgive some things. Many things happen, and that's entertaining. It's melodramatic, as I expected it to be, and that's fine. What's not fine is that it pushed my suspension of disbelief to its limits:
- Most events were far-fetched. I would have been fine with that if the manga didn't take itself seriously.
Spoiler (mouse over to view)
That debt arc is one of the most ridiculous things I have ever read

- Characters are overcharactarized, forced, not consistent, one-dimensional, and their motivations are too tropey. The oldest brother is probably the only exception. He's tropey, but is done better than the rest (probably because he is demoted to a supporting character). I'm fine with tropes, just not when they are built for the sake of drama without real substance.
Spoiler (mouse over to view)
What's with that "I only value talent" taken up to 11? Such overcharacterization should be left for shounen manga where it's actually enjoyable

- The art is good, but the "uke-azation" and "semefication" are too strong for my taste. When the couple are standing next to each other and are almost the same height, but then on the next page the uke shrinks in height just because they held hands, that's too much. I'm very good at suspension of disbelief, but people randomly shrinking and growing without explanation is too much. Or the way one ages up and becomes more "manly" and the other ages down to a childlike appearance in intimate scenes.

- This is just personal preference, but I don't like "damsel in distress" uke whose only purpose is to be rescued over and over again with trauma slapped in for emotional manipulation. I don't connect well with characters when emotional manipulation is too obvious. Anyone can add a sad backstory, but actually making the reader care about it is an entirely different beast.

One would think after all the negatives I mentioned I would give it a 1, but no. It was comically enjoyable and there was enough happening to keep me reading, just not in the way the author intended. The emotional manipulation failed to work this time. Maybe it just didn't click for me personally, as I'm not usually this scrutinizing.

Better than expected
by juls91
June 21st, 2016, 9:18pm
Rating: 9.0  / 10.0
I seriously liked it more than I thought i would, i read so many comments of people disliking this that it made me doubt if i should read it or not, but hey, its Kisaragi after all so why not?
I truly enjoyed the character Souichirou, he was so bold and honest, i was over the moon everytime i saw him, and he didn't come across as helpless or useless (as it could have been based on the difference in ages)
Three really nice brothers, a bit complicated at times but it was (also) nice to read (and look at)...
Was this comment useful?  Yes

There is a lot of emotion, much drama and problematic pasts to overcome for those of you who care.
I wanted to see some sexy scenes and a half decent story and nice characters.
The chars are okay, the story not to my liking and only very few sexy/sweet scenes.
I dont care about the smutty ones of the unimportant staff, thrown in here and there.
So this title didnt entertain me much. It bored me most of the time and I started to skip-read things.

The art got better with the ongoing volumes. But its none of my faves. I like it more soft.

Not that you get the impression that I only want pretty art with much sex... I liked the Yume no Kodomo manga a lot.
This one here just doesnt appeal to me in any aspect.

i like the story but no love scene is :/
by xlamyx
May 12th, 2014, 5:37pm
Rating: 7.0  / 10.0
i liked the art and the story too, i like the relation ship between brothers( een though they r not) ! but what make feel kind of down is the fact that we didn't any real love scence between kaname and Souichirou even though i was so looking forward to see some hot love but i was desepointed to wait untill the end of volume 5 and the love scene they put is not even worth it :/
but still i like the story

I dont get the high rating
by mtmt1311
July 5th, 2013, 12:06pm
Rating: 2.0  / 10.0
Kane annoyed the heck out of me, yeah yeah, traumatized but come one, get over it. Acting so weak and clings on any possible human is so annoying. The seme was so uke initially but the author randomly switch him back to seme, which is rather odd.
The story is so weird, everyone is gay, like opening gay with no females around. And come on, lets be realistic here. Who would want to see a guy dancing in a dress in a movie? I wonder what the reactions from straight male audience?
Story goes on and on with flat characters. I didnt give it 1/10 just for the art.
Was this comment useful?  Yes

Failed potential
by Inari-kun
January 16th, 2013, 12:21pm
Rating: N/A
from the start, I think the potential of this manga is sorta wasted. The main couple is weird to me, and the more interesting romance story (Masato's) never fully develops. Just as I thought that it finally would lead somewhere, the story abruptly ends. It's like there was no thought put into the story at all.
Was this comment useful?  Yes

Why is this story still continuing? That's what I want to know
by faerygoddyss
October 10th, 2012, 9:56pm
Rating: 3.0  / 10.0
This is a great example of a mangaka/author not knowing when to stop writing/drawing their series. The story started out semi-decent, but now I'm at the point where it's like "is this EVER going to end?" The answer to that is probably not. Note, that's not a good thing with this one.
Was this comment useful?  Yes

Liked the Idea, Flat Characters cause Fail
by FeyPhantom
September 26th, 2012, 12:03pm
Rating: 7.0  / 10.0
I completely agree with brid. I really liked the original idea and how the personal and professional lives of each started to flow into each other, but what I'm disliking more and more is any real depth to the characters. They're seeming to be more and more just products of their situations . The further I read into this story, the more the characters get flattened out - opposite what I want to see.

Reading brid's comment reminded me of Souichirou's original depth which I had completely forgotten existed at one point. To the point I've read, he's become a simple-minded character only capable of protecting or thinking of Kaname, and every now and again acknowledging Masato's existence. As for Kaname, he's struggling to let go of his past, and somewhat getting over it, but there's NOTHING else. He only has his past. That, and the ability to become the perfect homemaker. As far as I know, he doesn't have any goals or dreams for the future. As for his relationship with Masato, it seems to have completely disappeared despite their previous living together and extremely intimate relationship. And because of Kaname's and Souichirou's closeness, Masato seems to be completely separated from them (except when required to fill in the 'brother moments') and his story is becoming more about the drama around the film world. At this point it almost feels like the mangaka should just drop him as a character and give him his own story (or I'd like to say that if he had enough depth for it) because he doesn't really serve a purpose to the protagonist anymore other than aiding him when Souichirou needs a mature opinion on a matter.

So, for a plot which screams to be character-driven (what decisions will they make regarding the circumstances they were thrown in, how will their relationships develop further, how will they grow to become a family, how will it change their characters, etc...), the characters are completely falling flat. As a result, as it currently stands for me, I wouldn't recommend it, but I'll continue to keep reading for a little while longer (I have a high tolerance for bad/boring storytelling after all).

Really?
by SilentFaltrnLesrWatr
June 23rd, 2012, 11:12pm
Rating: 9.2  / 10.0
The series has very slow updates (the author) but not compared to some other series I've read, but I will wait as long as it takes, this is one of yaoi's I've read. Also confused about what other people were saying cause I found depth in the characters, I mean yeah the romance was fast but they were relatable. The psyhcology could be better, but it's a whole a lot better than most of the yaoi's I have read, so in otherwords I am very satisfied with the series so far.
Was this comment useful?  Yes