Login to add items to your list, keep track of your progress, and rate series!
Description
A world of blood, a world where the strong triumph over the weak, Ye Yun descended to hell to slay hordes of Demons and ascend to Heaven to slay the Gods just to prove his existence as the strongest, a world where a single being can rule over Heaven and Earth.

The is a wretched world where the strong dominate over the weak, while only a single person governs over the myriad of worlds. This is the world of carnage, this is -- the Mythical Realm! 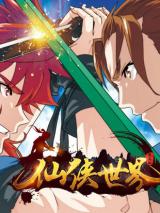 Another incoherent adaption
by Uthred
September 21st, 2018, 8:27am
Rating: N/A
This actually starts out fairly well. Its a lot more tongue in cheek than usual and the first few parts are fairly entertaining. But it suffers from the same problem as a lot of these sub-par novel adaptions i.e. trying to cram too much into too short a time. Characters, powers, items and relationships appear literally from nowhere. You'll find yourself going back to previous chapters to check if you missed something only to realise that no the author of the manhua simply shoved in stuff from the novel with no explanation. You can still follow along but towards the end of season 1 and all of season 2 is completely incoherent. Its a group of loosely connected pictures not an actual story.
Was this comment useful?  Yes

Terrible
by PZcolo
February 26th, 2018, 4:30pm
Rating: 2.0  / 10.0
The beginning of a story is important, it has to hook you, make you want to keep reading and so on, having said that, I can say that this manga fails terribly at it, This is an absolutely cliched story, the MC acts like an almighty hero from the get-go because... yep, just because, or maybe it's the "hero aura", the villains are the dumbest representation of a vile imbecile, a caricature of a bad guy in a children's tale and an equally immature art-style drawing ridiculous faces and postures to further ridiculice an already ridiculous character...
10 chapters is enough, I read more just because I'm thick-headed but this one is a lost cause from the start. Later on it gets a tidbit more serious but it's still very bad, MC wins because he's the MC, sudden power-ups, invisible all powerful masters keep popping up and so on, just mix all the bad cliches of the genre, add bad dialogues and equally poor storytelling skills and you get this.
I don't read light novels unless I liked the manga so I can't really tell but I'd still recommend to avoid this and read the LN if interested cause this is just not worth it imo.

Gag?
by kujika
February 14th, 2018, 8:41am
Rating: N/A
Is this gag/parody? Because it makes honest fun of the tropes. Otherwise it´s the stupidest work of this genre I´ve ever read^^

Starting with the prologue which has no obvious connection to the plot (well, not yet) and was very generic.
Was this comment useful?  Yes