Login to add items to your list, keep track of your progress, and rate series!
Description
Etou Kai may look like a squeaky-clean kid, but the Greater Kanto Narcotics Control Division's new investigator hides a violent alter ego and a dangerous past.

With his stoic partner Kurabayashi Hal, Kai is assigned to track down and stop the distribution of Dragon Speed, a dangerous new drug. But Ryuugen, the syndicate trafficking the drug, is almost impossible to infiltrate. Add street violence and a jurisdiction war with the Meguro Police into the mix, and it looks like Kai's in for some very long days at the office. 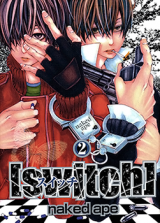 Note: You must be logged in to update information on this page.
Forum Posts Click to view the forum
Naked Ape's Switch Detective Manga Ends
over 8 years ago
Manga Duo Naked Ape to Resume Switch
over 9 years ago
The rest of the manga
over 11 years ago
Switch anime!
over 12 years ago

i've read this when i was kid and i reread this again few months ago
by Miachann
August 5th, 2020, 6:21am
Rating: N/A
i love this and idk somehow the ending makes me sad huhu
Was this comment useful?  Yes

Welp
by letterbee96
November 4th, 2014, 5:45am
Rating: 8.0  / 10.0
I finished the series. Some parts may have been better left out but overall it was a good read. Kinda difficult to understand during the first half but I pushed myself through it and I guess I could say it was worth it somewhat.

Art is good but more towards tolerable actually because some chapters weren't scanned properly. I don't blame the scanlators, it ain't easy so please understand.

Plot was there, fillers were there, cute guys, little female charas, some hot scenes and some pretty ones. Some badass moments too. The story did not once made my heart clench or anything but it was good enough to keep me entertained till the end.

Have a go at it if you have time. Whether the story would be truly worth your time or not, I'll leave it up to you to decide. My rating's based on how I felt AFTER the final chapter. (If I had to rate based on chapters or volumes, some would have been rated 1 or 2)
Was this comment useful?  Yes

Ending
by TheWhiteLapin
October 16th, 2011, 1:00pm
Rating: 10.0  / 10.0
I just finished the series Switch and I gotta say, it was a better ending than I thought it would be. It was a little, just a little rushed, but at least it wasn't an axed ending. I'm glad there was a follow up on the ending with the doujinshi of switch dj - sparkle. Thanks NakedApe for the great series!

Okaaay
by PepperPia
October 31st, 2010, 12:19pm
Rating: N/A
I really liked the main Plot, and I though it was a good idea and I could read it non stop.
Its a shame the whole series hasn't been scanalated but it made me actually think about buying it, but I don't like the art that much, its very hard to distinguish between the characters on just the art especially as I'm really bad at names.
I finally managed to find and read the rest of the chapters and it's a shame they didn't pace out the ending more because it was all abit quick, but it was a really good ending. But if the end had the same pacing as the start it would have been better. But read it!

It was okay
by strawberriceream
July 23rd, 2010, 1:17pm
Rating: 6.7  / 10.0
Note: "Switch" is the first original series that Naked Apple did (according to their author notes).
Since "Switch" is their first original, I already knew that the series was going to be a bit bland and the plot predictable. The Kai that changes when pushed to his limits is used a lot in several series, but it's always enjoyable to read

Compared to other criminal/police/detectives/mystery manga, "Switch" isn't as great, and the agents use a lot of outdated technology, but then again it's Naked Apple's first original, so it's to be expected. There are rushed parts and some situations are a bit unrealistic, but overall "Switch" is an okay read. I'd recommend it to people just starting manga, shonen-ai/yaoi genre, or just to pass time. (I read "Switch" because I found it when I had absoultely to manga to read)
There are times when the manga gets very deep--such as the scenes where it shows the reason why the criminals turn to drugs--but then it gets right back to having a very light atmosphere. There were times when I just felt so sad for the criminals, but Naked Apple could have made the story have more angst, drama, and action if they spent more time for each arc. It was just too short.
Now, on to my Ratings:
Art: I give the art a 7.4/10. I liked the style after I got used to it, but the proportions get WAY off sometimes (ex: the hands). Also, one of the covers (I think for vol3?) with only Hal on it looked like he went to a bad tanning booth.
Plot: 6/10. The plot's pretty average, and there's nothing special about it, but I give it a 6 for the arcs where actual character development and the angst-y past of the criminals showed. (I love the MP arc although some parts were a bit unrealistic)
Overall: 6.7/10. It's not a bad rating for a first original series

Art- 10 <----it changes a little from the beginning
Plot- 10 <---- drama, mystery, action. If you like crime dramas, then you'll like this.
Characters- 10 <----- loved ALL the characters. The only thing I was a little disappointed about was the fact that they kinda left some of the characters in the dust towards the end (like Mari lol). But it wasn't that big a deal. The manga was still great.
Was this comment useful?  Yes

It's a great manga! U shouldn't judge it from the first volume, things only just start to really heat up in volume 6! It's not so much a manga about drugs and investigators than a suspense thriller about the mystery behind the protagonists. The relationships are all really good. Only thing is with the art I sometimes have problems distinguishing certain characters... the faces dun really vary that much. But it's great nonetheless, and the relationships and characters are pretty well done. The best part abt it is the story!!! Just so exciting!!!!!!

Love it!
by FickleWings
November 9th, 2008, 5:38pm
Rating: N/A
The only thing I'm disappointed with, is the fact that there isn't more. I wish someone would hurry up and pick up 'Switch' because I've been waiting for a heck of a long time. There are nine raw volumes floating around the interwebs, and it's almost...heartbreaking LOL.
Awesome storyline, even if it's a sort of villain of the chapter type, with villains you can relate to, a main character with a secret, and amazing art. What more could you ask for?
Also, note that there is an OVA for Switch.
Was this comment useful?  Yes

Really Great!
by mizu_iru
February 10th, 2008, 2:21pm
Rating: 10.0  / 10.0
I really love this manga! It's a bit confusing the first time you read, but I reread the first fourteen chapters, and picked up on litttle hints that I didn't before, making it 500x better. And it was good the first time, too!
Was this comment useful?  Yes

Look before you leap.
by Aria34
October 2nd, 2007, 7:47pm
Rating: 10.0  / 10.0
I'm getting really annoyed with those who comment 'this seiries became shounen-ai' Before you read a manga look at the Manga-ka. Naked ape's other pen name is Acute girls. Acute girls creates shounen-ai doujinshi. But now it's time to give Naked ape the proper praise they deserve; I love the dynamic characters throughout the plot. It was a big problem for me to find manga that I really liked because I was really tired of all the two dimensional characters who were evil for no reason or the characters whose author makes them change attitudes and personalities through out the story. Even in their doujinshi they manage to keep the personalties even more perfect than the real authors can. Personally I really like the monochrome art. Well truthfully I like it thanks to them. And I have alway been interested in criminology and medical science so this series was just so perfect. I have been in love with their work ever since I read Dolls and the obsession is not going to end anytime soon.
Was this comment useful?  Yes