Login to add items to your list, keep track of your progress, and rate series!
Description
Russian bodyguard Alexis is given the task of hunting down famous art thief Shiro, but is intrigued by art researcher Kairi. In a world of lies, intrigues, and espionage, love can be a deadly illusion... 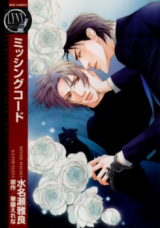 Spoiler (mouse over to view)
Julian was a good character... why did they have to make him fall for a guy he doesn't even know? Well, of course since it's a yaoi it has to be about love, but they could have found a different way. Also... they did it in a museum?! Correct me if I'm wrong, but I think this was the worst part in the whole manga. It... it made NO sense! Why would a police agent do something like that? Couldn't they find ANY better moment?

Well, the ending isn't bad though. I liked it. Too bad trashy choices ruined it as a whole.

nope, not good
by pleochroic
April 13th, 2011, 6:29pm
Rating: 4.5  / 10.0
this isn't a successful collaboration. the story started out with a lot of promise, but just did not keep it up for long. i'm not saying minase is a great author when she writes her own stories; they usually lack... something for me to really care. but they have a certain style that, even if they leave me cold, at least doesn't make me roll my eyes too hard. this one had them rolling at 50,000 rpm. it is way too melodramatic and... fake, i guess. everything about it feels fake -- like julian claiming he's let go of all his emotions, and yet he's overflowing with them at every step. like the setup for a love triangle, which is pretty much aborted without any further ado; very abruptly, and a total waste of an originally intriguing character. and the art which usually saves her stories couldn't pull it above water this time.
Was this comment useful?  Yes

Sparkling Art Sells It; Story Doesn't
by MightyMaeve
February 11th, 2010, 9:55am
Rating: 7.0  / 10.0
The story's pacing had a good start, but quickly falls on its face. It became anti-climatic in both story and emotion because my expectations were raised by the quality of the first few chapters, which were punchy and fascinating. After making its descent into predictability and mediocrity, and then the introduction of the stilted, posed third character, I was left with only the art...

And it was lovely. The sparkles keep the crow's attention...good thing, because the story doesn't.

---
by LUEser
January 23rd, 2010, 8:25am
Rating: 1.0  / 10.0
When I read the summary, I thought it was going to be action-packed, full of gun-fighting, and extremely emotional between Alexis and Jullian, but this manga, for me, has failed to live up to its title and summary.

I didn't like the fact that Jullian kept going on and on about how he's void of all his feelings to take revenge for his father, yet he was so full of emotions. He cried at the smallest things, he keeps debating if he should trust Alexis, he was so emotionally happy when the other blonde guy knew about his father. If he was to be REALLY void of all his emotions, he could've been extremely cold to Alexis, ignoring all his pleas to trust him. He could've been thankful to the other blondie but not...cry about it.

I forgot what the other blondie's name was, but...honestly, putting him in this story was a waste of time. He had no role whatsoever, he was basically put in as a small-time love rival to Alexis. Yeah, I respect the fact that he decides to let Jullian go by himself instead of chasing after him like some desperate idiot. I mean...they could've even have him watching at a distant of appreciating Jullian's well-deserved revenge against the Russian murderer.

Artworks are in the "Okay" category, nothing too gory, too extreme, or at the very least more handsome men. Artworks are lacking in all three fields; recommend for a quick read and nothing more.
Was this comment useful?  Yes

Agree with the others
by gloomy_gloo
August 22nd, 2009, 4:55am
Rating: 8.0  / 10.0
The artwork is gorgeous (as usual) and the smut is present, but the story is just a bit lackluster. It has an interesting kickoff, but that's all there is; the plot never picks up and there aren't any particularly memorable moments to give the reader any ups or downs.

Instead of focusing on developing the plot or giving the characters more background, this series centers more on how to get the two main characters together, which makes the story good, but not great.

It's not worth reading, IMO.
by BakaMango
August 10th, 2009, 11:25am
Rating: 6.5  / 10.0
I'm always excited when a piece Minase Masara is released. Her stuff is usually brilliant. This manga however, while it starts off promising, gets progressive dull and not up to her usual standards. Unlike her other manga, she hadn't authored this story behind this one. Which explains the discrepancy in the quality.
Was this comment useful?  Yes

Not bad, okay read
by rita
August 8th, 2009, 6:46pm
Rating: 7.0  / 10.0
I loved Minase Masara's artwork so I just had to pick this one up. She's definitely illustrated for better stories, and to me this was not one of them. It just went downhill for me once the ......yes, that would be a spoiler so I'll just leave it there.The summary isn't very correct, and as far as intrigue is concerned, there was not much that I would call intrigue in the story. And mystery....the author did try....<__<. Anyways, if you pick this up for a complicated plot you will be disappointed. Just think of it as regular almost-smut yaoi stories, drawn by Minase Masara (kyaa~) lol.
Was this comment useful?  Yes