Login to add items to your list, keep track of your progress, and rate series!
Description
Late has just accepted an assassination from a strange, mysterious client. To his surprise, it was actually the goddess Mises. A goddess from another world whose exsistence was on the brink of destruction after her defeat in war. Mises' quest… is to assassinate Masura Dzur, another god in her world. Late, the assassin with a 99.9% success rate, was tasked to assassinate a god in another world?! 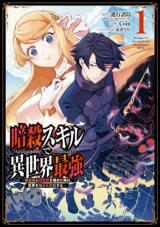 Good, but with really weird art.
by Gottesurteil
December 23rd, 2022, 8:51pm
Rating: N/A
So this is pretty enjoyable, albeit with a few things you'll have to overlook. The premise is the MC, who's a production-class based assassin, which is a really cool concept, in a VR game, gets offered a contract which he accepts. Said contract involves the creator of the game, who's a god supposedly, isekai'ing him. He can't take any items, he has no warning, and he seems to be incarnated in his VR character form. The fact he's a production class, means he can basically minecraft everything, turning him being dropped into a foreign world jungle with literally only the clothes on his back, into a 'Hyper' 'very' 'easy mode' 'survival' lol. (it keeps adding adjectives).

This is the part where you have to 'overlook' some stuff, because it clearly avoids standard acceptable-practices when it comes to isekai psychology. Ripped out of his own world, into a VR character, to a brand new world? Ok. No information on his client's status? Also ok! No information on his target? Still ok! Not a single bit of information (besides apparently inherantly knowing the language) on the world he's now in? Also OK!

This MC is the textbook definition of chill and accepting. To be frank, it's utterly ridiculous, but I'd 100% rather have this than a few chapters of panic, existential angst, self-pity, and/or pointless rage that other stories have.

Anyway, the story is actually pretty good, I really like the production-based-assassin concept, and the MC isn't annoying any way.

The only other thing I want to mention is the art. It starts off kinda normal, albeit with some weird frame focus in the first chapter (VR game), but as the later chapters develop, the artist clearly becomes more comfortable and unrestrained. The art gets WEIRD. Not bad, per se, just really weird. There's ecchi, and it's actually played for laughs a few times. You know the standard 'hold the food stick and tease the dog/girl/child/monster' or whatever? In this one the 'camera' is located behind and below her boobs, which makes the entire scene actually hilarious. But there are odd close ups, proportions can become insanely weird on demand, and so forth.

...I don't think I've actually ever seen an art style that i can compare with it. But it's not bad. It just really stuck in my mind.
Was this comment useful?  Yes