Login to add items to your list, keep track of your progress, and rate series!
Description
Follow the life of cat-girl Kurona and her friends as they meet other monsters, demons and spirits - learning how to deal with them...and with humans! 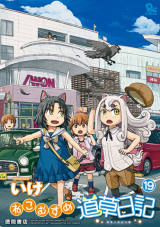 My issues with this is similar to swifft
by Seregosa
October 24th, 2018, 6:03am
Rating: 6.0  / 10.0
I remember reading this a while ago, I got several volumes into it before I decided that it wasn't worth reading anymore and dropped it. This speaks about how it's not that bad, yet it wasn't worth my time with all the flaws present.

First of all, the slice of life is kind of boring most of the time, it's very cute and peaceful, but it's also nothing more than that, it often manages to feel a bit too meaningless as there's never proper reasons for anything happening. The comedy is almost completely nonexistant, at least it misses for me. The mood can be fairly depressing rather than relaxing and interesting. The characters are all quite toned down and I don't feel like they're that spirited and lively despite the weird stuff they do, it feels artificial.

The fanservice/ecchi is honestly way too out of place here. I usually never mind fan service or ecchi, being a healthy adult male, unless it gets to extreme points where it's just moronic(like lucky pervert situations in to love ru that only got worse and worse and was not only ridiculous but also idiotic or the stuff in anime or manga where females wear skimpy armor for no reason when things are supposed to be SERIOUS). But this? Fan service doesn't fit in AT ALL. Yet there's such enormous amounts of it and it's just so damn out of place in a peaceful slice of life manga like this. That's yet another thing that put me off from reading more. It's hard to explain exactly why, but it has to do with the general mood of the manga and the personalities and perhaps even appearances of the characters. That they look like lolis are, however, completely irrelevant because I couldn't care less. It gives me a similar feeling to when a nonsense gag comedy with extremely many flaws gets overly serious parts or a very serious manga suddenly starts an overdone gag routine. It doesn't fit in and destroys the flow completely.

Then we have the relationships between the characters, I honestly don't like it and most of the characters, while I don't hate them, I don't like the either. There's literally only ONE character that I find to be amazing and that's Koma, the fierce little "dog" girl. Whenever she's there, it's usually a great read. She pulls up the mood and makes this manga shine. Sadly, she's not there all the time and even if she was, I guess I would get sick of it anyway since one character can't pull up an entire manga.

So, it gains a 6/10 for potential and Koma along with being fairly interesting in its own way, even if I had to drop it later on.

Typical Slice of Life Monster Musume Story
by france
December 30th, 2017, 6:04pm
Rating: N/A
Slice of life youkai story. It's really slow paced, episodic, and doesn't really have a plot. You can start from practically anywhere in the manga, and it'll be okay. It's good, but of course, not for everyone. I do like the characters. The art is pretty good, and everything looks hand-drawn, including the background. It's not really ecchi as the tags suggest (mellows out after the first couple chapters) if that bothers you.

Good series, could be better
by Swifft
September 12th, 2016, 7:35am
Rating: N/A
I explain why I think this in a long review but to summarize: this manga has a bunch of elements that ought to make it superb. It's cute, it's fantasy mixed with modern day, it's episodic, and it's comedy-focused. BUT, something about it feels...off, frequently. Not only is there fanservice that feels out of place (and believe me, I am REALLY not the kind of person to mind fanservice), but some aspects feel like they just aren't coming together quite right, plus there's some romantic elements that feel completely unwarranted. All in all, though, I do like this series and think it's worth reading, but wish it was amazing rather than just good. That said, this one character, Koma, she's amazing. Whenever Koma is around this manga becomes S-ranked. She's this cute, badass, rambunctious, loyal, lion-dog guardian girl who actually has serious moments and themes attached to her. More stuff like Koma would make this manga incredible.

Unusual but adorable
by imercenary
January 11th, 2012, 1:33pm
Rating: 10.0  / 10.0
Slice of life and seinen may not make much sense, but the story is ultimately about youkai trying to live among humans in the 21st century without the usual superpowered combat skills and abilities typically seen in action mangas.
Was this comment useful?  Yes

Nice!
by tsuto
June 18th, 2009, 6:05pm
Rating: N/A
It might be just me, but youkai related slice of life seinen is an interesting combination. The comedy is around there too, so it's just the right mix for me.

The art is good, it has this thing I can't exactly explain but that just drives me to keep on reading avidly.

What is it about? Nekomusume and friends dealing with some supernatural related issues.