Login to add items to your list, keep track of your progress, and rate series!
Description
Volume 1
From Blissful Sin:

Ever since his mother passed away, Hinata has been taken care of by Midori, who is as strict as he is caring. Midori’s smart, and tall, and handsome. He also doesn’t have a shadow or a reflection in the mirror. Wait… What? Hinata’s a scaredy-cat, and thinks Midori might be a ghost. But he is in fact a…?

Midori has taken care of Hinata ever since his mother passed away. Midori has finally "exchanged” with Hinata, but will these two newly weds finally have the time alone to enjoy their honeymoon? Or is there something Midor... More...
Volume 1
From Blissful Sin:

Ever since his mother passed away, Hinata has been taken care of by Midori, who is as strict as he is caring. Midori’s smart, and tall, and handsome. He also doesn’t have a shadow or a reflection in the mirror. Wait… What? Hinata’s a scaredy-cat, and thinks Midori might be a ghost. But he is in fact a…?

Midori has taken care of Hinata ever since his mother passed away. Midori has finally "exchanged” with Hinata, but will these two newly weds finally have the time alone to enjoy their honeymoon? Or is there something Midori is hiding from Hinata still…? Less... 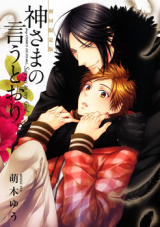 Why is this so underrated? This manga is top-tier!When is the next volume?
by Ainzley Kaidou
May 31st, 2021, 8:36am
Rating: 10.0  / 10.0
Apart from Kamisama No Uruko,Karasu no Yomeiri, and Ookami wa Hana no Kaori ,this is my all-time favourite fantasy BL! I seriously thought the following chapters would be bore me but NO! Personally,I believe this is Moegi Yuu- sensie's greatest work. I don't find the 'uke' annoying nor dislike his personality since he never wanted to part with Midori. You can't hate Hinata since he's a downright angel! And let's not forget how the Midori NEVER forced to do 'it' with Hinata. He only attempted to do so in attempt to warn Hinata from initiating it over again just so he could be saved. People who are hating Midori didn't exactly know the reason why he did that lol. He never raped his babe at all. Midori is so different from the semes I know who's sooooo toxic! I just hope the mangaka will release another volume! The last chapter is a cliffhanger and I've been hoping the other god will have a side story as well!

Dub-con or Non-con, it's still without consent
by chocolatecroissant
July 11th, 2018, 1:56am
Rating: 3.0  / 10.0
I tried giving this a shot since I'm fond of god/human BL, but only made it to ch.4 since each felt like it was adding sparkles to the lack of consent to make it cute or flirty. It's not and makes me cringe like BL in the early 00's did. There is even a "or I'll rape you" line in here. Ugh.
Was this comment useful?  Yes

aaaaw~
by Maria-Ayako
October 30th, 2016, 1:29pm
Rating: 9.3  / 10.0
he loved him for a really long time~ i love those kind of deep feelings in manga~ too precious to touch....
this was an interesting manga, nicely drawn, bit supernatural elements, with a world with only two ppl, yes aside one chara there werent others~ but we didnt need anyone else. no need for any love rivals etc. a nice story that makes u want more~ i really wish it would have been longer~ <3

Quite good
by Serendipity_
September 16th, 2016, 4:28pm
Rating: 8.0  / 10.0
Am I the only one who saw the resemblance between the seme and Sebastian in Kuroshitsuji?? They were practically identical, minus the whole fluffy romance thing.

It's cute, works as a quick read. I was mostly surprised by me not finding the uke annoying, which is a feat in itself because I tend to get really annoyed with those...kinda ukes. I also liked the art, felt fresh and sweet (Lol)

Love it
by aiish
September 10th, 2016, 3:52am
Rating: 8.0  / 10.0
I love it. More than Katekyo honestly, if only it was longer and more detailed. The world or scenario the mangaka have created for this enviroment is very nice and as mentioned before which slightly feels like Hajimemashite Kamisama or Black Bird. Anyways I love the drawing, the seme is just so sexyyyy and cute uke. I would love to see more of the supernatural aspect of the storyline, including other characters or Midori's powers. And I would have love to see how forever is going to go for Hinata.
Was this comment useful?  Yes

More!
by Himitsu-chan
December 5th, 2015, 8:40am
Rating: 10.0  / 10.0
I'm surprised that there's no other commenting on how good this manga is, i mean this is so good! I just hope that it was more longer and informative. The art is also good i like the appearance of the seme, so fierce yet gentle, i also like their relationship. I'm surprised that i didn't get bored in this story probably because it's kinda drawing you in.
Was this comment useful?  Yes

Why Aren't There More Reviews?
by sarin68
May 29th, 2015, 12:47am
Rating: 8.0  / 10.0
I've only found 4 chapters but there are shorter mangas on here that have more reviews so I don't get it. It's not a bad either, it's actually pretty interesting. I'm confused about Japanese mythology since I don't know much about it but I'm getting a Kamisama Kiss vibe from the fox and the crow gods.
But the art is good. Not great, but not terrible either. The romance is pretty much nonexistent (since I guess he's supposed to already feel that way at the beginning) but it's not especially unbelievable at this point.
I don't much like the guardian-turned-lover stories but this one is worth the read. Not creepily almost incestuous at times. It's done well, I think, and deserves more attention.
Was this comment useful?  Yes