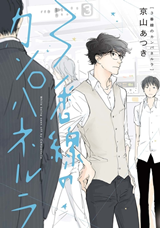 
Serialized In (magazine)
on BLUE (Shodensha)

Complex , poetic and so much more
by Mmatriuska
November 1st, 2021, 1:11pm
Rating: 10.0  / 10.0
Read it. It looks gorgeous and the writting is fantastic. There is so much going on inside the characters we follow that seriously at no point did it feel stupid but rather enjoyable.
Was this comment useful?  Yes

The mangaka manages to convey Kanou's conflicting feelings in such a realistic way you don't feel there's any unnecessary drama (which is a pretty common trope in BL manga, isn't it).
I feel like in most of the BL mangas I read, adults not always behave the way they'd behave in real life. But, in this manga, everyone seem to "click". Everything makes sense and I could see this happening any other day.

To some people, 3 Ban Sen no Campanella could seem "toned down" compared to other mangas from the same genre. To me, it's just a very realistically depicted slice-of-life with relatable characters and beautiful art and dialogues.

Spoiler (mouse over to view)
I mean, it's been some time since I've cried from how beautiful a manga is. And I cried like a baby in the scene when Kanou gives the high-schooler the necktie. Such a simple gesture, but the whole scene is just super heartwarming and a great way to finish this story.

Hauntingly Beautiful
by bbj_3
April 10th, 2021, 8:29am
Rating: 10.0  / 10.0
It's a gorgeous story with very moving heart. Kind of reminds me of impressionist paintings where the sketchiness puts a sense of movement in the art.

The story is also very interesting, and the main character is relatable with those around him being well flushed out; however, it leaves so many openings which I'd love to see explored. What was the student thinking? Did he also feel a pull toward Kanou? We see Kanou pick a relationship with his both (probably the best choice considering), but there was a spark of something (friendship, understanding, etc) between him and the student which the student clearly felt, but I would love to know if that possibility between them was the understanding which Kanou assigns to it (a stranger saving him) or something more to the student (which Kanou seems to dismiss as a possibility).

Either way, I think Kanou was a better adult than we see in many stories like this - he never pushed and in fact created a respectable distance before finding love with another adult rather than doing anything questionable. His upstanding nature in a lot of ways (with the out and proud gay employee as well (another character whose perspective I'd love to have seen)) made me really want him to have a happy ending, so I am hopefully he made the right choice with the boss.

With so many high quality characters moving with their own motives (felt but not always told), it is a must read in my book.
Was this comment useful?  Yes

Beautiful
by luna697
July 18th, 2020, 9:32am
Rating: 10.0  / 10.0
I loved the introspection. There were so many beautiful lines. It's not often you find a manga that feels like it has a soul, especially among all the fast fiction and gratuitous sex. I'm so happy I stumbled onto this. A favorite for sure; I can't wait to re-read it and re-experience these emotions some day.
Was this comment useful?  Yes

absolutely bautiful
by hadasla
February 12th, 2020, 11:01am
Rating: 10.0  / 10.0
this manga has everithing- the feels, sexual tension, slice of life, wonderful characters, depth.
I really recommend this beautiful and unique manga
Was this comment useful?  Yes

Strong story with fleshed-out characters.
by Howling
October 11th, 2019, 9:07am
Rating: 10.0  / 10.0
I absolutely adored this manga. The story is light and romantic, without any unnecessary drama surrounding the couple. The symbolism of the high school boy became very heartwarming as soon as you realised that the purpose of his character wasn't to be the love interest of the main character, but rather to be his support and lead him to happiness. I also enjoyed how they discussed the whole "I'm not gay, you're just an exception" aspect of the relationship. It shows that this was a mature couple with realistic intentions of dating, where the possibility of the seme being "gay just for the uke" was ruled out from the start. It's a cheap trope with the underlying tones of homophobia, so I'm glad that the author made sure to address that before making their relationship official.

This is actually a top-quality manga, and I'm very happy to have read it. It was fluffy and warm, but also realistic and mature (not necessarily in the sexual nature). I'd recommend this any day. I'd give it an 11 if it were possible.

Introspective and emblematic
by OmNom
October 5th, 2019, 7:40pm
Rating: N/A
This story is quite different from what you usually get in BL; the many nuances of contemplation on life that the central character goes through will surely take you on a journey along with him. The mangaka's delivery is what makes it even more unique, and the plot devices employed to tell the story all served a purpose and existed for a reason. Pretty unconventional stuff.
Was this comment useful?  Yes

More than anything, this manga shows that all it takes is one small thing--a friendly glance, a kind gesture, an encouraging word from a stanger--to spark change for good in someone's life. We should always be kind to others, if only to remind us that that we need to be kind to ourselves as well.

Although part of this manga documented Kanou's budding new hopeful relationship with his boss, the most special and lovely relationship in this manga was the one Kanou had with the high school student. It was one small thing that the student did for Kanou, a gesture Kanou didn't even know he needed, that turned Kanou's life around and ultimately saved him. When Kanou cries by himself after thanking the student profusely for his help, despite the student feeling like he didn't do anything special, I felt that. An innocent stranger gave him the chance to start his life anew, to cut all the dead matter away to make way for new growth. He couldn't even give himself that chance. Kanou needed to relearn how to take the first step forward in moving on from the past, a lesson a stranger unknowingly reminded him.

This is one of the better BL mangas that I've read in a long time. I mostly read whatever and filter out whatever's boring or horribly problematic, but this is a gem that will stay with me for awhile. I really need to get my hands on a physical copy to show the author my support, or just hope that an English publisher will license it so I can have it in my hands.
Was this comment useful?  Yes