Login to add items to your list, keep track of your progress, and rate series!
Description
The St. Mikhailov Academy student Oribe Mafuyu comes across a mysterious silver haired boy named Sasha. He is a Qwaser, a being that draws power from Soma and is able to manipulate a specific element. And now, in the 21st century, the mystery revolving around an Icon turns the academy into the battlegrounds for the fight between the Qwaser! 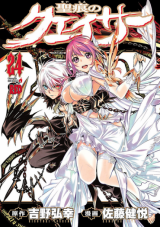 O.....K....
by Acradnxy
December 7th, 2018, 5:04am
Rating: N/A
I nearly dropped it every time I try to read it, but the art is sooooo good. The art is what making me go on on this boobful manga. The story is really nonsense. I mean it's cool to see these people can control certain elements, but TOO MUCH FANSERVICE. It feels like this manga is just for fanservice especially with BOOBS. So tired of looking at boobs
Was this comment useful?  Yes

Can't believe I finished it
by ShonaNingyo
April 30th, 2018, 12:56pm
Rating: N/A
I started and stopped this many times and finally finished it. While I do like some of the fetishes presented, I think that by the 60% mark everything seems to be just slapdash and added on top of already-barely understood plot points in this universe. If it had just been 'Periodic Table Battle Royale" or "Eastern Orthodoxy Iconography" then it'd be much more coherent but as it stands the two ideas mash together very unevenly with little sense of what the hell is going on and what the motivations of the villains are at times. When it was over, I wasn't relieved, disappointed, or glad, it simply ended, which is kind of disappointed in of itself given how much i slaved away trying to finish this series..
Was this comment useful?  Yes

not bad worth a read
by sinxer
February 17th, 2017, 5:54am
Rating: 7.8  / 10.0
kept me interested, if you don't mind some of the content give it a go it ain't half bad. Slightly annoyed with how it was all wrapped up at the end for some reason, wouldn't mind an epi/extra chapter for some extra closure on the characters.
Was this comment useful?  Yes

Different
by dreamscape
March 26th, 2014, 5:34pm
Rating: 9.0  / 10.0
There are some obvious debatable concepts in this manga that other commenters have already addressed, so I won't get into those; however, I do want to point out some other aspects of the manga that I think set it apart.

For one, the element-based abilities are an interesting science/fantasy touch that I really enjoy. They make for good action scenes, too. The abilities are closely connected to the overarching plot, but I still have a lot of story to go to see how it unravels--which is one of the fun things about an interesting story/setting, of course!

I also really like Sasha as a male lead, and I think he's a relatively rare find in the ecchi/harem genre. Generally, I find male leads in harem manga to be boring, weak, undeveloped, and possessing of little to no redeeming qualities whatsoever. (The fact that the target demographic is male is no excuse for slacking on development of male characters. Fortunately, some of the newer harem anime/manga seem to have gotten better about this. But, I digress!) Sasha is strong, intelligent, driven by a dark past, and shows development in several areas throughout the story, such as abilities, emotions, and relationships. He also gets a well-deserved amount of "screen time," unlike other male leads, who seem to only exist so their little sisters have someone to jump on in the morning.

Even though I generally dislike products of the harem genre, I still think the story and characters of Qwaser make it worthwhile, even for other female manga fans. If the excessive fan service will bother you, then of course proceed with caution.

Otherwise, I really do recommend giving it a try! As a straight female, this recommendation comes completely uninfluenced by the generous display of breasts.

followed the story ok
by flamefire28
October 4th, 2012, 8:38pm
Rating: N/A
i followed the story pretty well and it wasn't well put together but i still enjoyed it to whatever extent it had and to the guy who made that negima comment i find that offensive since negima is my fav manga and the fanservice is mostly in the beginning volumes compare volume 1 to volume 14 and you'll think they're 2 completely different stories
Was this comment useful?  Yes

Alright
by xox-l-emo-n-xox
August 16th, 2012, 8:52pm
Rating: N/A
If it weren't for the anime and the wikipedia page, I don't think I would understand this manga very well.
The story line is alright... LOTS of fan service (which is alright for me... maybe not others).

It's a good read when you have nothing better to do. But I would much rather recommend the anime over the manga.. which is something I rarely do.
Was this comment useful?  Yes

The worst, stay away
by residentgrigo
April 9th, 2012, 3:38am
Rating: 1.0  / 10.0
This anime/manga is the worst garbage I have read/watched in the last 10 years. I have seen the horrible anime like MD Geist and Urotsukidoji watched "line crossing" movies like Cannibal Holocaust and they are nothing compared to this and it gets even worse as it goes along. Eva Braun (Hitler's wife) shows up later for example. She is an immortal lesbian who rapes younger clones of herself to death to stay alive. I don't get it either.
No research went into making this too as the religious and historical facts are all wrong and Germany is presented as a country that looks like it is visually stuck in the middle ages. I am from Germany by the way and am part Russian so this burns double for me. I hope that the abysmally low average rating at for example ANN supports my own rating here. Please don't support it with your money and go for something good like Berserk, Blade of the Immortal or Suicide Island. These are also "mature" but in a way that doesn´t celebrate the continuous rape of underage schoolgirls like this piece of trash. The manga might as welll be Rape Play the comic. Qwaser is further a shounen manga in japan so it´s suited for all ages. Very classy Champion Red.

It was... entertaining?
by enaikelt
January 15th, 2012, 9:26pm
Rating: 7.5  / 10.0
There were SO many bad things about this manga, but somehow, it managed to pull off a fairly entertaining story nonetheless. I was quite honestly surprised... and no, it's not one that relies solely on big boobs. I suppose if you were really into those the entertainment factor would skyrocket, though.

So what's bad about it?

Well, like other people have mentioned, there's occasionally a huge disconnect between chapters and scenes. Sometimes you just won't have a clue where you are, when in the timeline it is, and what on earth anyone is doing. It's jarring.

Secondly, the Anime Catholicism is somehow strangely offensive even if you come in prepared for it. I'm more or less used to awful Japanese misinterpretations of Catholicism by now... but when I first ran across them I was like THIS MAKES NO SENSE! WHAT IS THIS?!, and this is seriously one of the weirder ones.

Furthermore, the author doesn't do a good job of the setting right at the beginning. He never really explains the structure of the Adepts and... and the other people... in a simple fashion. Wikipedia is crucial in understanding the plot, and even then it seems like things happen just so they can happen. There's a prophecy from a random book, a bunch of meaningless but cool-looking religious symbolism, a lot of Russian that is probably madly hilarious to anyone who speaks Russian... you get the picture.

Finally, as for the ecchi factor.. holy crap it was wildly disturbing. That's not to say it wasn't well-drawn, but Wildly. Disturbing. Tentacle. Things. They are there. They abound.


But for all that it somehow managed to make a good story. It was very focused, for one thing. It meandered off into side characters now and again, but for the most part it focused on really establishing a solid core group of main characters who people could sympathize with. I particularly liked Sasha and how the author occasionally lampshaded his tsundere tendencies, lol. I still have no clue what on earth he's fighting for though.

It has sprinkles of humour throughout, and the battle scenes are pretty decent and easy to follow. Mostly. The romance/character development between Sasha and Mafuyu is far more adorable and much less depraved than what you'd expect for a manga with this much sex, and was a major plus point (if you discount that Sasha is just barely legal... in Japan. Which is saying something.) The author does a decent job with recognizable characters, and doesn't fall into the Loads and Loads of Characters trope... much.

Overall it's worth a try if you're looking to kill time with a battle manga and are not easily offended.

Or if you're really looking hard for drawings of people breast-feeding, for some reason.

Anyways, despite the flaws, this manga is pretty good. Yes, there is some disconnection between chapters, and yes, there is a lot to follow for the average Wikipedia-less person, but remember the most important thing . . .

what!!
by gaara877
September 26th, 2010, 1:56am
Rating: N/A
come on, the story should be more interesting. I really hope it be like naruto or big three manga, but this is to bad... also no interesting character. negima is more interesting than this manga.