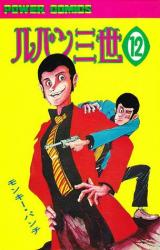 Enjoyable, but a huge mess.
by likalaruku1
January 1st, 2021, 6:32pm
Rating: 6.0  / 10.0
I could write an entire article contrasting how different the characters between the anime & the manga are. When Hayao Miyazaki & Isao Takahata took over the first anime adaptation, they practically recreated the characters from the ground up, so people coming into this manga from the anime are in for a huge shock.

It's REALLY hard to rate this series as a whole. Despite the fact that all 14 volumes were pumped out in the course of 3 years, the series evolves rapidly every 2 volumes.

One thing that never improves is the way Monkey Punch ends adventures. They just stop abruptly & go straight into the next story with no transitions. The one thing that improves the most is the pacing, which is terrible for the entire first half of the series & improves when the adventures get longer.

The art improves little by little. Early on, nearly every character looks the same with minute differences that make the stories very confusing. Zenigata looks like Lupin with a hat. Goemon looks like Boy Fujiko. Volume 12 is where you really start to see the body language & face designs more clearly.

There's a baffling story arc in the final volume that was adapted to anime where the characters act as though Lupin's never killed anyone out of anything other than self defense before, which is a load of BS that doesn't hold up if you restart the series, adding to the general belief that even after the adventures get longer, there is no continuity between adventures, with the world resetting like minisodes of Aeon Flux in MTV's Liquid Television, which could also help to explain why Goemon joined Lupin, then went back to his old master, then went back to Lupin, & why Lupin doesn't hold a grudge againt Jigen for the many times he tried to kill him, & why Fujiko is 99% of all women in this series without being a group of clones.

To sum up the overall plot, the story is about a clever but unlucky sociopathic narsisist crime lord & his clan of thieving assassins who are in an endless turf war with with other gangs.