Login to add items to your list, keep track of your progress, and rate series!
Description
One day, university student Narumi Daisuke meets a pink kigurumi rabbit in the street. This kigurumi, named Arita, falls in love at first sight with Daisuke! But, no matter where the two meet, it seems that Arita won't take off his bodysuit. To Daisuke, who finds this strange, Arita makes a shocking confession! If he takes off his costume, he will die... "The truth is, I'm an Undergrounder!" Is he for real?! 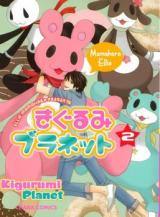 Cute, but a bit too childish
by OmNom
June 24th, 2017, 1:22am
Rating: N/A
Take the BL element out and this manga truly reads like a shoujo series, that is, there's a plot, there's adventure, there's romance, and there's also the signature childishness aimed at a young teenager audience. This story had the potential to be rather interesting at first, but then gradually became watered down by the end and lost a lot of momentum on its track to being a solid one. By then it has pretty much been rendered down to a silly, non-consequential type of plot, the type that undermines a large chunk of prior development leading to it. Kind of a shame, really.
Was this comment useful?  Yes

So. Adorableeeeeeee!!!
by Kinky-Chan
June 30th, 2012, 7:41am
Rating: 10.0  / 10.0
I like the costume. It's so cute! And of course, I love the story. Although I'm not really a fan of shounen-ai, but I love it when it comes to Mamahara Ellie's works. Although the story is very unique, interesting and sweet, it's a bit sad that we can't get to see much of improvement with Daisuke and Arita's relationship. Although they like each other and all. But still, it's really nice and unique in a way!
Was this comment useful?  Yes

This is wonderful
by Astur
June 28th, 2012, 7:08pm
Rating: 10.0  / 10.0
I had the pleasure of reading Kigurumi Planet and I don't regret it in the least. It's not trying to be an over-the-top series, it's just a fun manga about two people from two different backgrounds falling in love

Why is it always like this?!
by MaZzAx
March 2nd, 2012, 1:49am
Rating: 8.5  / 10.0
This manga was genius. I love it when amongst all the typical stories you find one that stands out.
The story was so original, the characters were loveable, the art was great and the plot was fascinating.
But then came the end. It was fine I guess. But that's all. After all the awesomeness, the ending was a major disappointment. No surprises there, I should have seen it coming. For some reason, most of the genius manga have disappointing endings.
It was feel good, sure. But it wasn't conclusive.
One other misgiving was the lack of juicy romance scenes. It was all just a bit too comedy-hugging and not enough fluttersome kissing.
But since the plot was refreshingly original, it gets a high rating from me.

Put it on your feel-good read shelf
by arethusa
February 27th, 2012, 2:53pm
Rating: 9.5  / 10.0
It's bordering ridiculous but it's an absolute pleasure to read. Can't hurt that kigurumi are very, very cute. The story is refreshing, and though they are ridiculous, doesn't go over-the-top. All characters are likeable. It's got strong female presence. And you can't help but root for the leads because of all the positivity and honest feelings around.

Spoiler (mouse over to view)
Also, you get to be surrounded by bishounen and bishoujo when the suits go out
.

Adorable!
by tetothread
June 14th, 2011, 8:06pm
Rating: N/A
I really like Mamahara Ellie sensei's work. Her art is really pretty and stories are really unique. Kigurumi Planet comes off a little weird to me (I'm not used to reading unusual creature pairings, no offense; I don't know how to put it) but I'll continue reading this because I don't want to be left hanging! =u=
Spoiler (mouse over to view)
And the part where he uses plastic bags to cover his feet when he enters Daisuke's house is too funny! xDD

I normally don't read Shounen-ai, but...
by redappletaffy
April 19th, 2011, 2:50pm
Rating: 10.0  / 10.0
I normally don't read shounen ai, but this was so cute! The art was nice, the storyline is not terribly difficult (but it's cute), and the whole underground-scifi-wacha-wacha aspect makes it so much more interesting!

Did I mention it's ULTRA-CUTE?
Was this comment useful?  Yes

I swear
by Trifoilum
June 21st, 2010, 4:11pm
Rating: N/A
this is the first (and probably only) I'm supporting a Manx Some Creature Thingie pairing. I SWEAR.

Yeah, yeah, it's a suit, but frankly, I'm fine with a light non-sexual romance happening between those two. Kudos to Mamahara Ellie for being able to make..this pairing possible. It raises the bar on yaoi wacky pairings.
Was this comment useful?  Yes

Kigurumi Planet
by faerygoddyss
June 3rd, 2010, 5:50pm
Rating: N/A
I don't know how I feel about this story. I love Ellie Mamahara, but this one is definitely different from her usual stuff. It has that cutesy feel, but almost over the top, yet it leaves you a little bit curious about this whole 'Undergrounders' thing. I'll be sticking around, but mostly to see what Arita looks like without the costume. :3
Edit.: Stuck around, and this is more of a kid story. Not my thing.