Login to add items to your list, keep track of your progress, and rate series!
Description
From MangaHelpers:
This is the story of two of the greatest military commanders in history: the Roman Publius Cornelius Scipio and the Carthaginian Hannibal. The story follows the two of them from their early life on. Hannibal is initially shown as a strangely silent infant, who seemed like the gods forgot to put a soul in his little body. However, he soon begins to speak in a way that shows his remarkable abilities. Hannibal and Scipio are driven enemies, and their struggle shaped an era. 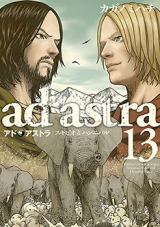 Decent historical manga
by fiqipraramadhan
August 10th, 2020, 9:59pm
Rating: 7.0  / 10.0
Quite detailed description, the drawing is alright, i really enjoy the aspects such as battle strategy, political warfare, from both the Cartagians to pave the way of a conqueror for Hannibal and the Romans for the defender which's Scipio and other magistrates/leaders. Interesting characters with their personality too, just some intrigues can be exploited too much unnecessarily, not so interesting, and kind of predictable if you're familiar with how the campaign went, legends and history narrated in documentaries, games, and texts. The writer definitely did a very extensive research.
Was this comment useful?  Yes

Like a fast paced Historie
by joeyt741
October 23rd, 2015, 1:22am
Rating: 9.5  / 10.0
Man this is turning out to be a great manga, similar to mangas like Historie that deal with large scale warfare from ancient Roman times. However this one is definitely centered more on the action and psychological battle between the generals, whereas Historie has that, but is more about the lives of the Characters/Eumenes own personal story. The art and pacing of the story are both top notch with this one so far, the characters are intriguing and the battle scenes have been well choreographed, both in art and writing wise. I'm a sucker for these large scale ancient Roman war Mangas so I might be a little biased, there's just something surreal about seeing those formations of soldiers in battle, marching in giant square formations against each other in such huge numbers that's really awe inspiring.
Was this comment useful?  Yes

Vinland Saga Fans Rejoice
by Blackhand1
October 4th, 2015, 3:00pm
Rating: 9.0  / 10.0
Do you like Vinland Saga? Do you wish there was more Vinland Saga, but are sad that there isn't? Then go read more Ad Astra, because it has all the European History violence you could hope for!
Was this comment useful?  Yes

I'm learning a lot here
by TundraDweller
June 21st, 2015, 3:06pm
Rating: 10.0  / 10.0
Any students of the history of the Punic Wars and other related areas would go mad over this series. The art is superb, the narration is badass enough to make your blood pump like mad, the battles and tactics are interesting and engaging while not overly complicated, the pace is also steady. Despite the constraints of established history, the combination of interesting source material and a skilled author means a must read manga. I'm completely new to this episode of history but I don't feel at all lost while reading it. With the adventure tag present, you can be assured that the excitement is real.
Was this comment useful?  Yes