Login to add items to your list, keep track of your progress, and rate series!
Description
Mizutani Souta is confessed to by the school's famous frail beauty Aizawa Shino. Then came another one of her! And another! And another! Each with different attitudes, but all of them are Aizawa Shino herself. What will this sort-of harem love story come to!? Another tsukkomi-all-you-can offering from the creator of Fujimura-kun Mates! 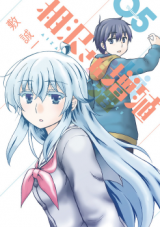 Unexceptional.
by MondSemmel
April 16th, 2019, 11:40am
Rating: 7.5  / 10.0
I really enjoyed the over-the-top humor of Fujimura-kun Mates. Aizawa-san Multiplies has a similarly absurd premise which also serves as a setup for lots of humor. But here, the humor itself is much tamer and a bit repetitive, the humor density (amusing stuff per page) is quite low, and the ending is abrupt and somewhat unsatisfying.

Ultimately, this was an okay read, but I wish it had been more like the first half of Fujimura-kun Mates instead.
Was this comment useful?  Yes

Decent read but very shallow, hollow and with jokes that doesn't work that well
by Seregosa
April 12th, 2019, 4:43pm
Rating: 6.0  / 10.0
This story is quite a cute love story with some decent gags thrown in, I liked it as a short time waster for a few hours of time. It's about a girl whose emotions can manifest into other versions of herself and her relationship with the mc and a lot of retorts by said mc. Nothing special, but interesting nonetheless.

A huge apparent flaw is the lack of truly awesome comedy(it's the kind of stuff I'd laugh myself to death at when I was younger, as I know since I read the earlier chapters when I was younger, but it's just not that funny anymore several years later). Rather than saying it lacks truly awesome comedy, perhaps I should say that it's more suited towards younger readers. Scary how you change while getting older.

Another flaw that bothered me a bit was that the romance was just way too shallow and the story felt very rushed. It ended before anything much happened. Barely any time seemed to pass in the story, the feelings never seemed to develop that much despite the many scenes dedicated to show its development. I mean, I just don't feel like I can relate to the characters, the actions by the characters and events in the story feels a bit too forced and unnatural. It lacks impact, but I guess that we can also imagine that this makes it more realistic as not too much effort is put at giving huge reasons for anything, it just happens, the romance isn't anything that special, it's just kind of normal and uneventful. Still, it really left way too much to be desired. They went on a date perhaps once, but even that couldn't truly be called a date. Nothing TRULY happened throughout the entire manga. It was just so damn empty. After 38 chapters, I'm left feeling a bit hollow as if I didn't really read anything despite the manga ending. It's as if the story just barely started. Not a masterpiece at all.

This story is one where a lot of emphasis is put on the romance aspect and their emotional development and inner thoughts, be it about love itself or the issue of this girl who can split into several people. I would prefer more gags and less half-assed romance/drama, but that's just a matter of taste... maybe. I do truly feel like the idea of the story is quite intriguing though. One person splitting into several and then there's the synchronization of memories etc... Could've probably been something better than it is given the right circumstances.

I feel like it's worth reading, no doubt about that. However, if I have to recommend who it suits the most, I would probably have to say... teenagers. Yup. This is a manga that works best for teenagers, up to 19. It's not a style of comedy that would work as well with adults as it would with teenagers, of course depending on person. I do prefer fujimura kun meitsu way more. It was a story with more over-the-top gags, more lively characters, a more interesting main character and heroine and a generally more lively story that felt really pleasant and amusing to read. The author should've done the same thing in this manga but didn't, sadly.
Was this comment useful?  Yes

lol
by agartha
April 3rd, 2018, 10:18pm
Rating: N/A
The straightman in this manga is real. A lot of the absurd harem situations are resolved in a logical and yet still hilarious way. The humor is a lot less Japanese centric than Fujimura-kun mates so it is easier to understand.

Not bad has me laughing
by Trey21
September 23rd, 2016, 8:20pm
Rating: N/A
Kind of unique twist on harem genre, the mangaka has some good and random sense of humor, I've read a lot of manga I can usually guess what a lot characters will say but nope enjoying this just as much as Fujimura-kun Mates
Was this comment useful?  Yes

I don't know if Crunchyroll has bit more than they can chew, but while they religiously update a number of their simulpubs (Yamada, UQ Holder, Nanatsu no Taizai or Fairy Tail are good examples), they have left several others picking up dust... While not removing their "simulpub" tag. This series, for example, has not been updated even once since it was picked up: all 17 chapters scanlators had translated already before dropping it due to license are the only ones they have, while the series has been steadily advancing at its usual pace in the poriginal version, now 3 chapters ahead (if there has been no side chapters).
It's still better off than Tales of Wedding Rings, given that for that one scanlators released until one chapter ahead than them... A couple of days before they released their version of all chapters until next-to-last.
The only thing I want to say is that, if you are going to professionally pick up something, all legal and with license and rights, the least you can do is act like a professional and work on it; dedicate yourself to what you're being paid for.
Was this comment useful?  Yes

ROFL
by CrossRyuu
November 30th, 2014, 12:53pm
Rating: 4.0  / 10.0
the mangaka has a talent for comical genre he still got it but not as funny as his first work it kinda overshadows this cause its on a different level
if you havent seen his first work then i advice you to read it (fujimura-kun)
you wont be disappointed its better than this one