Login to add items to your list, keep track of your progress, and rate series!
Description
The Cheerleading Club is trying to recruit the last remaining member of the Rooting Club. Expect an excess of school spirit and fanservice. 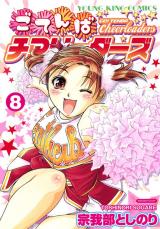 Very Similar to Amaenaideyo!! . . .
by Seijurou
December 19th, 2011, 2:23pm
Rating: 10.0  / 10.0
. . . Which is a good thing. Imagine if Satonaka Ikkou and Nanbu Chitose had a peaceful relationship, probably what it was like when those two first met, and you would find the main couple of this series. Give it a shot; you will like it.

A nice mixture of drama and comedy, plus romance.
Was this comment useful?  Yes

Ridiculous ... -LY AWESOME!!
by monkeyvoodoo
July 31st, 2009, 12:23am
Rating: 8.0  / 10.0
This is like, shounen fighting manga meets pantsu overload. There are some points at which I find myself realizing that this title is completely ridiculous... and then pantsu saves me from whatever it was I was just talking about! ^^


Whatever - this is a totally fun read. I really am not sure how else to put it. It's generic enough to feel somewhat cliche'd, and yet the level of awesome and the nonstop pantsu make me feel like there's really nothing to complain about! Nothing deep, but for lack of depth, it sure makes up in pant-- style!

Good so far
by loosecannon504
July 22nd, 2009, 1:03am
Rating: 8.0  / 10.0
I randomly found this manga two days ago and it's surprisingly good. The characters aren't two-dimensional, it goes into detail about all of the things cheerleaders have to do in order to do their routines, and the protagonists are people you actually want to root for instead of beat up. The only thing I don't like about the manga is the cheerleading coach Kuroi. She's pretty much a shallow bitch that yells at people over every little thing and only cares about looks. She cuddles and becomes all lovey-dovey with Mikio only when he has his glasses off, but when he puts them back on, she slaps him away and immediately starts to berate him like it was all his fault. Too bad that she's one of the main supporting characters that appears in pretty much every chapter...

Other than that, it's a good manga. I'd advise waiting for a couple weeks so that more chapters can come out unless you can read the raws (It only has 13 chapters scanlated so far), but you won't be disappointing once you start reading it.
Was this comment useful?  Yes

I like it
by Kevadu
April 14th, 2009, 9:42pm
Rating: 8.5  / 10.0
Nothing especially original here, but it's a solid ecchi comedy series. Thankfully the situations don't seem forced or cliche. You won't find the usual convenient falls and the like here.

The protagonist is actually quite likeable, which is kind of rare in this genre. He's passionate about what he does but he's not a complete fool about it (though it may seem that way at first). His character is developed well as the series goes on and the budding romance between him and Saki is also interesting.

The series also treats the subject of cheerleading with respect. The guy and girls put a lot of hard work into what they do. But while their training is certainly acknowledged, this is not a sports manga and it's not the focus of the series. Montages abound, but the author does successfully convey the impression that the interpersonal relations that *are* the focus of the series are happening in a larger context.

This isn't a groundbreaking series by any measure, but it is a solid, enjoyable read.

None
by Lippe-kun
March 15th, 2009, 11:25am
Rating: N/A
Just... Liked it.
I remember other manga that were of a boy from a Rooting Club, but then it kind of deviates from the subject.
But then there is this one, i just don't know, i liked the two main characters just the chapter 1 that it was a bit rushed (2 months in 1 chapter O_o)
Overall I Like This.
Was this comment useful?  Yes