Login to add items to your list, keep track of your progress, and rate series!
Description
Ages ago, the goddess Athena was served by fighters called Saints who channeled the power of the Cosmos within them. Now a youth named Seiya has trained to become a Saint himself by earning the mystical Cloth of Pegasus. He is joined by other Saints with Cloths of their own to fight for Athena. 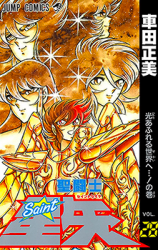 Honestly? I have everything to say for this manga.

First of all, aesthetic wise it was very pleasing, satisfying my thrist for 1980s stuff.

Secondly, character wise it was very diverse. At first, Athena and most women in this boys genre, shounen, being presented as damsel in distress which ticked me off almost entire series. But then I realised, some men like Shun, Hades, Siren, and some others broke toxic masculinity thru their word and personality while embracing their ladylike persona, and some women like Pandora, Marin and her colleague (who was in love with Seiya) also were pretty badass in their own sense so yes, I believed Kurumada did the right thing. Not to mention gray area between good and bad thus we couldn't really wholly hate or vice versa. I really loved expected and unexpected politic aspects of this whole story broken into three stories: Gemini, Poseidon, and Hades. I kept wondering, what if Athena actually accepted Poseidon's proposal, that would be interesting though. Of course, Ikki was and is always my favorite, he always stole the show.

Thirdly, genre wise, it lived up to the expectations of this genre. Nothing to stand out but still a classic sci-fi shounen however. I recommend this one strongly, for sure.

That's all I can think of, for now.

Well then...
by ForteAtrox
October 11th, 2013, 9:26pm
Rating: N/A
I am sad because of the two people below my comment because they clearly don't understand that this is a really old classic manga and what old manga concepts are like... Anyway, it's not a perfect series but still entertaining. Flashy and OP~
Was this comment useful?  Yes

Deja Vu
by topboy
June 3rd, 2009, 10:23am
Rating: 6.0  / 10.0
Repetitive fight step :
1.If Good guy attacked,it don't work cause the bad guy is so strong and superior than him.
2.If Bad Guy attack,good guy will wound badly
3.For god knows reason last attack from good guy that don't work at all at first will 'always' eliminate bad guy

The story about five bronze saints that legend said they are long live than cockroach (99 million years before dinosaur and even after homo-sapian extinct...five of them still alive)

Oh, I almost forget poor girl named Saori (athena) who repeat her role as a damsel in distress every now and then.
Was this comment useful?  Yes

OK Series
by m1sael
February 23rd, 2009, 6:08pm
Rating: 6.0  / 10.0
Finding this manga scanlated in English is impossible. So I read a spanish scalantion. The manga is very 80's in both the drawing and style but it doesn't stop being a cool manga to read. Things that I like: very original concepts, story development is not always linear, combats from beginning to end. Things I didn't like: some plot devices are repeated over and over again, the characters don't develop their stories completely, and some of the saints techniques are just gay (like using roses or music). But in conclusion Saint Seiya is worth the time.
Was this comment useful?  Yes