Login to add items to your list, keep track of your progress, and rate series!
Description
Shikada Kokonotsu's father owns a rural sweets shop, and his plan is for Kokonotsu to take it over one day. However, Kokonotsu wants to be a manga author instead! One day in summer, the cute but weird girl Shidare Hotaru, from the famous sweets company, comes to pay a visit. Apparently, Kokonotsu's father is famous and she wants him to join her family's company. However, he will only agree if she can convince Kokonotsu to take over the family business! 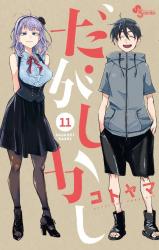 Note: You must be logged in to update information on this page.
Forum Posts Click to view the forum
Dagashi Kashi Creator Already Drafted Manga's Finale
over 4 years ago
Dagashi Kashi getting a anime
over 6 years ago

Its not that interesting.
by apsyda
July 28th, 2020, 12:23pm
Rating: 5.0  / 10.0
The art is great, reaction faces are well made, and the girls are very attractively drawn.
But the humor is just mediocre most of the time. Its of the standard 'wacky antics crazy yelling' archetype and does little to break that for most of the run.

There are hints of comedic novelty but they are rarely expanded upon or tried again.

Being a SoL there isn't much of a plot, but that itself is not really a detriment. So take that as you will.
Was this comment useful?  Yes

Hardly anything but a commercial, but it can be interesting
by Seregosa
August 8th, 2017, 8:43pm
Rating: 7.0  / 10.0
So, yeah. This is pretty much a commercial for japanese style candy, it would surprise me if the author is not getting sponsored by some of the ones making the candy. The anime is the same. The story is pretty much nonexistent, the plot isn't there, the characters are pretty bland and the comedy is subpar most of the time. The character cast is made up of just around 5 characters(the dad, the mc, the crazy candy chick, and the twins of different gender, one who is the mcs friend and one who is in love with the mc, the generic stuff) with almost no other characters at all, not even random people. If I had to rate this based on normal criteria, I would give it a 2 or 3 out of 10, not the worst but a good bit below average.

HOWEVER... You can't rate this normally, because this is pretty interesting if you're into japanese culture. It was probably made with the idea of giving people from Japan a nostalgia trip back to their childhood and that is pretty much its selling value. We're given an overview of the japanese-style candies that most over there would've eaten during their childhood, along with an overview of the stores that sell them, ways of eating the candy and some other trivia, told in a way that would make it somewhat fun to keep reading. So, if you want to enjoy this fully, read it with this in mind. It's not meant to be a good story with good plot and a made up journey or whatever, it's just a manga that states facts with some comedy mixed in to keep you hooked.

Despite the fact that I liked it, I can't give it more than a 7/10. It's good, it's above average, but it can't even start to close in to the real stories out there. It's intriguing, but it's not anything special or that good when it comes to characters, story, plot, gags(humor in general). Maybe if the jokes were funnier or the characters were more interesting I might've been able to rate it higher.

I recommend this for reading, but only if you're interested in their culture or candy/snacks.
Was this comment useful?  Yes

Exemplar Art Style, Silly Humor
by VWombat
December 10th, 2015, 4:32am
Rating: 9.6  / 10.0
The story is negligible, the humor is a fairly standard boke and tsukkomi, and there's an occasionally a bit of ecchi. From that description, this manga seems a bit generic, but it's interesting because of the unique art style. Some of it's based on standard practices, but as a whole, it stands out from the generic style so many other manga have. The exaggerated reactions contribute to the humor, Hotaru is visually appealing with her expressive face, and in general, it's fun to just look at. There's also an educational aspect, I suppose, and the children's games and candy go well with the silly tone.
Was this comment useful?  Yes

Entertaining, Educational, Fun.
by Padawan
August 21st, 2015, 2:49pm
Rating: 10.0  / 10.0
There's plenty of manga about cooking, but I've never encountered one about Japanese candies (Dagashi). It focuses on one dagashi per chapter, delving into its history, reasons for its popularity, characteristics.etc all while giving a nice slice of life story. Each chapter is shorter than typical manga yet it feels just right.

This series is quite entertaining and educational at the same time, with fun and lovable characters, good humour, and a good dose of romantic comedy mixed in. I love the art style, its different, yet attractive; the heroine in particular has a winning design XD
I look forward to when the author does a 'full-size' manga series, cuz I really like his style.