Login to add items to your list, keep track of your progress, and rate series!
Description
From asdf scans:

In order to live a normal high-school life, Mirei started her first part-time job. But after receiving her first paycheck, she almost kills a highly-ranked bishounen…?! An encounter with a super poor and pessimistic innocent girl, is this a beautiful miracle?! 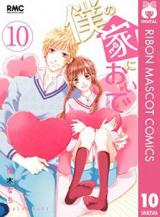 Interesting
by hotarusasaki
January 26th, 2016, 3:22am
Rating: 8.0  / 10.0
So far I'm 7 chapters in and interested in finding out what happens after! I like the idea of this story, it's not as cliche as high school girl meet high school boy shoujo, I find it interesting that Mirei is 15 years old while Mano is in university, yet he is not afraid to flirt a little with Mirei. He's a nice guy and mature when it matters but when it doesn't matter he is cheeky without crossing the line. The playfulness between them is very adorable. Other people dislike how Mirei has a very low self-esteem but to me that also is just a quirk which makes Mirei different to typical shoujo high school girls, and also let me inform you that the level of low self-esteem shown, although exaggerated, can be found in rl. The whole story is greatly exaggerated and also takes some 'issues' lightly but that is quite expected from a shoujo romance, I've read many of them and I think this one actually does better in that aspect. I'm also liking the additional male character we've just been introduced to, he doesn't immediately start to think badly of Mano and instead seems genuinely like a friend so far, which is more believable than sudden character coming up and professing love. The setting is also a fun one to play with, you have a girl who is living with a guy and willing to do 'anything' to be of help. Hopefully the author uses this setting well.

Therefore, I think this is a good manga because the art is pretty, the characters are quirky/interesting, it's got a fun setting and so far the plot isn't bad. The relationship between characters is amusing as well. The only bad point as I've said is that some things are brushed over for plots sake and other things are greatly exaggerated to make things more funny or interesting, but it's still definitely much better than average typical shoujo. I respect how the author is being creative with her characters.
Was this comment useful?  Yes

Mirei-chan is just only trying her best , read the RAWS
by trafalgarlawsan23
January 19th, 2015, 5:25am
Rating: N/A
what's wrong with you guys?
thats how this story works , of course Mirei-chan comes from a very poor family so expect that her saying is a little degrading , we just only have a 4 chapters for now but just wait for another chapters and you guys will see the improvements of Mirei-chan , I already read the raw and it is very interesting , Mirei-chan is trying her best to improve herself not only herself but for a perfect fit for Mano-san so if you guys feel dissapointed and this manga is just nothing for you guys then don't read this manga , we dont need HATERS
Was this comment useful?  Yes

Trying
by attaesc
December 26th, 2014, 9:30am
Rating: N/A
I'm trying to like it. I seriously can't stand this. I admit that I skip all the speech bubbles and just look at the art. I absolutely hate Mirei's speaking style, which is seriously degrading. At least be a little stronger as in Sukitte Ii na Yo's Tachibana Mei who was also bullied, but has a stronger sense of self-worth.

WShin
by HummingBird0o
October 12th, 2014, 7:53am
Rating: 1.0  / 10.0
you took the word out of my moth ! i mean why would she caall her self a garbage and digrre her slef to that point ? and she keep crying for no reason !! its really annoying >< i just love the art -_- but the story is sooooooo stupid and point lees.
Was this comment useful?  Yes

Disappointing male lead..
by Silent Moon
July 26th, 2014, 5:38pm
Rating: 7.0  / 10.0
I enjoyed this manga a lot. True, it had a very cliche storyline, but this is typical shoujo. Like most shoujo mangas, it starts off all refreshing and cute, then it ends up plain annoying. I've read the raws up to chapter 20 and
Spoiler (mouse over to view)
turns out that Mirei was supposed to be a substitute for another girl that Mano was previously living with. Later on, it developed into a relationship BUT Mano isn't really sure if he's completely over the previous girl. She shows up on his birthday and screws up the plans Mano and Mirei had AND Mano starts wavering on his feelings. Ugh, this got me really disappointed. Plus the lack of confidence in Mirei starts to get ridiculously annoying.
I guess all shoujo manga are just the same, the longer it drags on, the more worse the plot gets.
Was this comment useful?  Yes

Seems interesting and hilarious in dialogues and art
by ishitagupta
February 11th, 2014, 12:18am
Rating: 8.0  / 10.0
I'll admit, I felt the oddball-ness of the same scene WShin is talking about before me as well and the self loathing which the heroine feels gets on your nerves now and then, but come on, it's a shoujo romance! You need to suspend belief in reality to enjoy the story if you've started reading it!
Art is funny in expressions and pretty cool with the bishie art. Stick figure and chibi forms are also very amusing.
Character development is slow, but thats probably coz we're only 2 chapters in for now. I'm interested how the prince's kindness progresses down the volumes.

8 pages in, and
by WShin
December 19th, 2012, 11:55am
Rating: 2.0  / 10.0
I cannot stand her already. This is beyond low self-esteem. This is some kind of obsequious flattery to the higher classes/anyone who earns more than her mixed with self-degredation to an awkward and unconvincing point. This manga had better redeeem itself within the next 10-15 pages, or I'm looking elsewhere.

WTF quote of the day: "I apologize once again for breathing in the same air as you guys."

It's implied that she's somehow acting like this because she's poor. I hope her "low-self esteem" and general obsequiousness and misguidedness is a stereotype that will not be affixed onto the poor in Japan. Some parts of her thought processes (like wanting better clothes) make sense, but her speech is seriously irritating at times.

Below is a blow-by-blow account of the first chapter, to save you the time of deciding whether it's worth your time:

Spoiler (mouse over to view)

Page 14: Cue the blushing bishounen! And the super naive heroine who doesn't understand when to use CPR herself (the guy's talking, which means...you don't). Then her self-degradation saves her from doing it. Is it always going to be this pattern?

Page 16: Great, the male lead is stating what I thought two pages ago. Why so slow, people? And when talking to the guy, she's criticizing herself to a really, really sad point. There should be violins playing the saddest song in the world as her background. It should be raining non-stop. Please, someone save her from herself. Everyone has insecurities and things they don't like about themselves (I know I do), and though I can sympathize with her feelings of worthlessness, when they're all she thinks about (and her joy of attending school in a proper uniform), a therapist is recommended, not some smiles about how "pretty" she is. It's a miracle the girl hasn't been diagnosed as depressed already.

Page 22: Oh my god, they can't even shower? That...sucks. I understand her delusions.... :S I've been shoujo-fied. Money is rejected because oddly enough, she still has pride about that, even if she doesn't about herself. GLARING INCONSISTENCY.

Page 31: Boy guilts her to spend money on him to feed his stomach. The first thing heroine worries about is her socks (she has a sock-complex, dating back to an incident in middle school or something due to her lack of financial stability) when he asks her to go inside his apartment. Not whether the guy's prone to sexually assaulting her and faking the injury. She could just go to the convenience store and buy something, for god's sake.

Page 33: Convenience store shopping is mentioned. It is always going to be like this. The obvious is always 1-2 pages late.

Page 34: Boy jacks girl's lunch and she feels embarrassed. But not for him. For HER.

Page 43: Most hilarious page of the chapter yet. She's clutching the onigiri while it rains on it. Was the mangaka trying to poke fun at the genre. Parodying while playing it straight?

Page 44: Stalker boy finds sad!Heroine in a box in her most degrading moment. This was clearly written by a masochist.