Login to add items to your list, keep track of your progress, and rate series!
Description
Collection of short stories:

1) Anohito to Nitenai Kuchibiru
Kaji was in love with his sempai for years but his sempai got married and had a child. Kaji takes care of the kid and watches him growing up...

3) Blood
When their father dies, the rival half brothers must sort through their feelings of anger, regret, pain and desire that their lives have been steeped in thus far...

1) Anohito to Nitenai Kuchibiru
Kaji was in love with his sempai for years but his sempai got married and had a child. Kaji takes care of the kid and watches him growing up...

3) Blood
When their father dies, the rival half brothers must sort through their feelings of anger, regret, pain and desire that their lives have been steeped in thus far...

5) Datenshitachi no Yoru
S&M relationship between step siblings is taken to extremes.

6) Double Snake
A former gangster has turned into a regular office worker, but he still sleeps with his gangster lover. But one of the newbies doesn't like the fact that his favorite 'boss' is having a relationship with an office worker. Less... 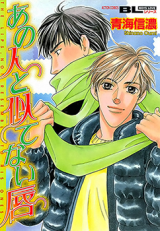 The rest of them are pretty terrible. Especially 3 and 5 which are sort of the same premise, both done very badly.
I don't particularly enjoy any of the art either. it's just ok. the rest of the stories except double snake are 0.
Was this comment useful?  Yes

Mixed bag
by OmNom
August 4th, 2019, 11:06pm
Rating: N/A
Imma echo the majority's sentiments here that Double Snake is without a doubt the best story in this collection and by quite some margin. First story is rather cheesy and nothing really special but at least it's cute and I love the funny chibi drawings. The rest of the manga is actually quite outside the box in terms of ideas but they're not necessarily the easiest to stomach lol, especially the two stories both about damaged brothers in the same household, and the execution isn't exactly great either.
Was this comment useful?  Yes

Wonderful
by 56lulu
January 3rd, 2019, 7:22pm
Rating: N/A
I read this years ago and promptly forgot the name after reading it since I was binging so many manga at the time. Now, almost 8 years later I've found it again whoo! Rereading it reminded me of why it was so haunting 😀
Was this comment useful?  Yes

double snake!!!
by blu_papillon
February 15th, 2013, 10:03pm
Rating: 10.0  / 10.0
giving it this rating just for Double Snake. I read this oneshot years ago and I have been looking for it since so I could re-read it! Obviously, it is really good to stick in my brain this long. Love this story.

Double Snake ^__^
by Mochi__x
June 22nd, 2012, 7:32am
Rating: 9.0  / 10.0
I have to agree with everyone else, the last story is definitely what makes this manga worth reading.
Don't like any of the other chapters, but Double Snake is great! XD Totally adore strong ukes & the seme's scar makes him hot ♥ Plus their love is so deep, it's really cute to read ^__^ Would've enjoyed at least another chapter on these two.
(That's why my rating is for that story only, the rest aren't even worth mentioning.)

Meh.
by strangledwords
March 4th, 2012, 9:54pm
Rating: 3.0  / 10.0
Stories one to five were mediocre at best. And the fifth one was really disturbing for me, but that's just because I can't handle that style. The last one, Double Snake, was great. Definitely a well done one shot if on it's own. But collectively, this was disappointing.
Was this comment useful?  Yes

Last Chapter Wins
by Sasageru
June 3rd, 2011, 6:41pm
Rating: N/A
I have to say of all the stories in this volume, the last is my favourite. The first story was ok but the rest i didnt enjoy much at all, they seemed a bit forced. The last story though... i would like to see more of that, past, present and future :3
Was this comment useful?  Yes

3- very disturbing, doing it infront of the dead. n the hell the uke just let himself being raped. i mean, he have no feeling whatsoever before right? or he just feel an obligation or something? the only plus is it is incest. 6/10

4- um...when someone expecting butsecks but dont get it is quite a let down ya know? better if its a series i think. 5/10

Double Snake!
by gemini85
July 19th, 2010, 7:13am
Rating: 8.5  / 10.0
Just like the comments below me already indicated, pretty average manga..
However the last story Double Snake is totally worth reading!!! I loved that one and wish it was longer.
Was this comment useful?  Yes

Hmm...
by HeurekaH
October 12th, 2007, 5:06pm
Rating: N/A
Not much to say. It was okay, not great not horrible. Exeption is the last oneshot Double Snake. I really like that one. The rest is... plain!
Was this comment useful?  Yes