Login to add items to your list, keep track of your progress, and rate series!
Description
Ataru Moroboshi is the unluckiest man alive... and the most lecherous. In a race deciding whether alien oni will take over the Earth, he ends up representing Earth. His opponent? Lum, an oni girl! Despite the weight of the world on his shoulders, Ataru's stupidity (and lechery) get the better of him, and before he knows it, he and Lum are now married! On top of that, Ataru's unluckiness attracts all sorts of hijinks, chaos, and mayhem. Petty rivalries, exorcisms, period dramas, swim meets... Will it ever end?

Received the Shogakukan Manga Award in 1981.
Won the 18th Seiun Award for Best Comic... More...
Ataru Moroboshi is the unluckiest man alive... and the most lecherous. In a race deciding whether alien oni will take over the Earth, he ends up representing Earth. His opponent? Lum, an oni girl! Despite the weight of the world on his shoulders, Ataru's stupidity (and lechery) get the better of him, and before he knows it, he and Lum are now married! On top of that, Ataru's unluckiness attracts all sorts of hijinks, chaos, and mayhem. Petty rivalries, exorcisms, period dramas, swim meets... Will it ever end? 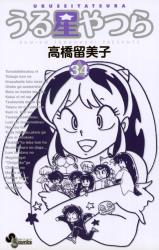 Note: You must be logged in to update information on this page.
Forum Posts Click to view the forum
does the art improve?
over 12 years ago

Meh, not all too anime like more like looney tunes or Tom and Jerry.
by MASTER GUYVER
June 24th, 2021, 9:24pm
Rating: 7.1  / 10.0
I won't say it's bad but he anime grabbed my attention more than the manga. That's because the manga consist of short story while the anime combined those stories or extended them. The voice actors also grab my attention.
I just feel like this was meant to be animated as a funny cartoon and it was. It has more cartoon behavior than anime behavior. Rumiko older works are mostly not serious and you will find repetitive behaviors. So if your looking for something deep this ain't it. But I loved the movies. An episode or two can get boring (when you binge watch) because you start to remember how old it it is. But this is a classic and led a path for most harem manga.
But here's the catch:
Spoiler (mouse over to view)
Instead of the girls liking the main character and obsessing over him, the male lead instead chases after them. There's only one who truly likes him who he keeps avoiding but you'll learn to know he's just fickle.

lol this is my childhood
by Miachann
September 17th, 2020, 8:30am
Rating: 10.0  / 10.0
i still remember the plot a little even tho not all plot but i love thisss, i read this when i still kids lol even tho this is echi my pure mind back then just think that like normal kids
Was this comment useful?  Yes

Lum is the best
by plotrobert
May 3rd, 2016, 9:58pm
Rating: 9.0  / 10.0
So like everyone else I consider this a classic in the romance genre. It deserves its' place there as well, the characters are memorable, it's pretty funny, and the plot is just classic Japanese wackiness. If you can get over the old art style and the repetitive nature of the humor (Ataru is a pervert to not-Lum and Lum does not like this fact, repeat for 350+ chapters, which I'll admit tried my patience at times) then this is quite the gem. Lum in particular is a very sweet character, you can see why readers pretty much fell in love with her from the start.

Even though I really enjoyed this I don't have much else I can really say. I will recommend you watch the second Urusei Yatsura movie, Beautiful Dreamer if you like the manga or anime series. The tone is very different than the series but it's a great film.

A classic
by nail80
September 8th, 2014, 9:06am
Rating: 7.5  / 10.0
First of all it's important to point out that Urusei Yatsura is a classic and paved the way for many romantic comedies one sees nowadays.
The episodic nature of the chapters keeps the manga somewhat fresh, but sometimes it gets extremely frustrating. You have a moron who has a girl that likes him a lot and wants to spend time with him, but he mindlessly follows every single girl around. Maybe I'm being too hard on Ataru, but sometimes that's how I felt about the whole situation. The secondary characters also play an important role with the comedy, and made sure the manga lasted as long as it did.
It's funny, when I watched the anime I loved it, but the manga didn't do that much for me.
It still gets a respectable 7.5
If you want to read a classic and love nonsensical comedy you should give it a try.
Was this comment useful?  Yes

Better than current time, worth reading, beyond special
by TheGentleman
April 18th, 2012, 11:45pm
Rating: 10.0  / 10.0
This manga is more entertaining than those being published today. Yes we know it was written 30+ years ago, it is also humorous, not to be taken too seriously and never meant to be a complete drama. It's repetitive only as much as a person's personal habits are. If you are a Vampire Knight die-hard don't read this, if you liked Tokyo Crazy Paradise do. It's older, less graphic, more original, and all around a pleasant read. Please note if you aren't able to read a normal book(500+ pages typed) then you should read this in segment instead of all at once. Use it as a filler between manga updates or other manga. If you are able to read a normal book within 24hours without actually time focused on it, then you can probably read this without getting bored. Either way it's worth reading, and if you don't care for it read some other manga until you can come back and fully enjoy this, its a manga that shouldn't be missed.
Was this comment useful?  Yes

bah nothing special
by darkraiders
March 27th, 2010, 2:21pm
Rating: 6.0  / 10.0
New chicks, Ataru the pervert run after them he get beated up or its the jealous wannabe wife who beat him up when the other chicks don't do it.Thats what you will see in pretty much all 350+ chapters it's fun for the first 50 or so chapters but after it start to be annoying really annoying.

this one takes some time
by Brainskull
February 21st, 2009, 6:22pm
Rating: N/A
Urusei Yatsura, is a very long, funny (slap stick style), episodic, with very little romance, and is dated but i still liked it. In the beginning i had problems, could not get into it, but after a while it started to grow on me. If you think you can sit down and down and read this bad boy in 1 or 2 maybe even 3 days your sadly mistaking, and if you try you'll just hate it, do what i did take it in bunches. Its funny i used this as an anti depressant, if i felt down or just bored i would pick this up and after 10 chaps. or so it would have picked me up. So my opinion on this, that this is a great light read and if try to take it serious you'll just end up not liking so good luck and happy reading.
Was this comment useful?  Yes

Humbaba
by Thethhron
December 8th, 2008, 8:32pm
Rating: 10.0  / 10.0
Well, as said, it is slightly out of date. HOWEVER! It is so funny that being out of date does not matter in the slightest. It is funny to the point that it cannot be described in words. And the relationship between the leads is also very deep and well explored. Her first work is, like her later ones, a classic to be read by all. Good ol' Rumiko.
Was this comment useful?  Yes