Login to add items to your list, keep track of your progress, and rate series!
Description
Circa, who had always failed in his summoning classes, accidentally summoned... Bisnuth, the king of fire! Bisnuth who was angry at being summoned suddenly, and the clueless circa who got enamoured with him... this is a couple's love story which is thicker than blood and hotter than fire.

Latest Release(s)
v.1 (end) by Random Fujoshis over 4 years ago
Search for all releases of this series 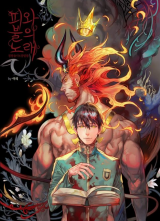 mmh 🤔
by blupblupchaton
November 21st, 2022, 2:14pm
Rating: 5.0  / 10.0
The art is beautiful but the story feels incomplete, with the smut scene being full on rape but not fitting in with the next scene/s? Really disapointed, I was expecting so much more when I started the manga.
Was this comment useful?  Yes

Short and simple
by suzakufire
August 8th, 2021, 12:14am
Rating: 8.0  / 10.0
A short and simple story, progressed a little too fast, but overall an alright read. I mainly liked the unconventional uke and pairing. The setting was really interesting and there were many potential story threads, but none were expanded upon. But oh well, it's not a big issue to me, if that's just what the manhwa was supposed to be.

Art is really pretty and smut was good.
Was this comment useful?  Yes

here for the "Muscular Uke" category after seeing the preview image
by mistakesweremade
March 1st, 2020, 2:28pm
Rating: 7.0  / 10.0
kinks / general warnings (from most to least relevant)
Spoiler (mouse over to view)
biggest issue is the dubcon warning. it begins with circa assaulting bisnuth and groping him. as the scene continues bisnuth essentially chooses the ~lesser of two evils when circa manages to talk him into fucking (ie: teasing/fingering for penetrative sex). bisnuth does enjoy the sex as the chapter progresses—it's just very obvious he's taken back by circa's forwardness. at first he tries to stop what's happening even though circa is already two fingers deep.

other warnings
-minor depictions of blood
-brief depiction of death, but very quickly subverted with resurrection
-brief depictions/allusions to bullying and harassment, which bisnuth attempts to take care of with his own brand of assault LMAO (it's played for comedy so it's nothing serious)
all other warnings are in the categories of the manhwa, so read those

this is essentially one of those short, 2-4 chapter manhwas leading up to and essentially written for sex. the comic does attempt to build a story with its world building and initial set-up, but we all know what we're here for (in my case, see the tin ^^ LOOOOL). the fast romance + rushed story leaves all the relationships/characters very predictable, but it's expected for the manhwa's length. still, it's kinda nice to see someone as apparently inept as circa not only successfully summon a literal demon king, but score big time with him too.

overall, the manhwa does what it wants to do, and i enjoyed it for what it was~!