Login to add items to your list, keep track of your progress, and rate series!
Description
From Exiled Rebels Scans:

Eight years ago, our parents remarried and we became brothers.

Haruto is six years older than me. We’re not related by blood, but he treats me kindly and takes care of me as if I were his real brother.

Because of this, I started harboring this desire to monopolize him….

I don’t want him to find out about these dirty feelings!

Although I live alone now that I started university, my brother found a way to come after me….!? 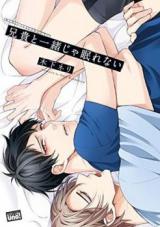 Had potential
by kurosu_yuuki
January 7th, 2020, 8:33pm
Rating: 7.0  / 10.0
This is actually three stories, not just one, like the description implies - which means they are two-chapters long and probably not what anyone is looking for if they are not after one-shots, because it lacks enough time to be able to go into any depth.

The first story is about the two brothers, and while they are not real brothers (not a spoiler because it's one of the first things they say), the fact the younger one calls the older "Aniki" is a bit of a turn off for me. The idea is quite cute, which the younger brother having moved out because the realized he had feelings for his older brother and didn't want his kindness directed at others. But the execution is quite fast, because it's only two chapters long. It's not the most original story, but there is a slight angst and it could've been great if it was longer, but they were pressed for time.

The second story is my favorite. It's about a boss that falls in love with his employee and sleeps with him when he's still drowsy from being woken up, so he pretends it's a dream. It's my favorite because of the cat-and-mouse game, where the boss has to pretend not be in love and that is was just pleasure, so as to not reveal his true feelings. That would normally generate a lot of frustration (exactly what I look for) in his partner, but, unfortunately, this is the shortest of the three stories, being only one chapter long. I also don't really like the seme-uke dinamic in it, since the boss is the uke even though he's the one that makes the first move and that's cold. I don't really like when the semes pine after the ukes and are at a disadvantage, but that's just a personal opinion.

The third story is my least favorite, and although I don't particularly care if a situation is morally challenging in manga, they were student-teacher and it was addressed, but not treated as problem. The premise is that the teacher's face is basically a "resting bitch face", so everyone is scared of him, except the student, who sees his real self under that. It's cute, but they didn't really explore much after that.

I'm not a fan of the art because they look kind of feminine, but their bodies are masculine in that skinny, bony way, which makes the sex scenes not so great. They also cry very often and neither the ukes nor semes are my type.

This was an ok read, but a bit forgettable and I'm afraid it won't make it to the top of my list. It could've been better explored if all the stories stood on their own, instead of a series of one-shots (which I was unaware of or I wouldn't have read it).
Was this comment useful?  Yes