Login to add items to your list, keep track of your progress, and rate series!
Description
1-3) Is it wrong to eye your body
"As long as Kakuno's willing to look at me, it's okay."

Hazumi was helped by his classmate, Kakuno, who saw him being harassed by some upperclassmen. His heart stolen by Kakuno's strong and beautiful body, Hazumi told Kakuno that he wanted to see it all. Kakuno obliged, but as time passed their relationship became no clearer.

They started out as strangers, neither lovers nor friends. Which would it be, if any?

4) Night falls
Stirred by the rustling sounds of the leaves, the boy awakes to find a stranger in his house. Surprised but undeterred, he tries to befrien... More...
1-3) Is it wrong to eye your body
"As long as Kakuno's willing to look at me, it's okay."

Hazumi was helped by his classmate, Kakuno, who saw him being harassed by some upperclassmen. His heart stolen by Kakuno's strong and beautiful body, Hazumi told Kakuno that he wanted to see it all. Kakuno obliged, but as time passed their relationship became no clearer.

They started out as strangers, neither lovers nor friends. Which would it be, if any?

4) Night falls
Stirred by the rustling sounds of the leaves, the boy awakes to find a stranger in his house. Surprised but undeterred, he tries to befriend the mysterious guy that hangs out in his sister's room after night falls. Time pasts and his sister disappears, trying to go after the guy who decided to leave. Will he see his sister again? What about the stranger of the night?

5) The end result
Continuation of the second story. Less... 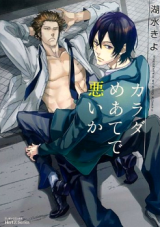 Strangely Filling
by Avelys
July 17th, 2015, 2:20am
Rating: 8.0  / 10.0
Unexpectedly, each of the stories had a bit of meat. Unfortunately, quite a few questions raised are never answered, and the plot lines are sometimes unclear. Nevertheless, the manga is a good one indeed.
Was this comment useful?  Yes

Above average.
by F0rcefi3ld
December 22nd, 2013, 3:10pm
Rating: 6.0  / 10.0
I like both stories quite nicely. I wouldn't prefer the second story to the first though, although it is more original. The drawings are good and the plot moves at a good pace. What appeals to me is that there's no mushy, fluffy, flowery scenes that makes me go squeamish. Nowadays, I read yaois and think it's another version of shoujo with boyxboy. This one is different. A plus is the poker faces of the ukes. I love poker-faced ukes.

The stories just needed a little more spazz to make it brilliant. Unfortunately, I think it's a little bland.

Nothing too dramatic
by torride
August 12th, 2013, 4:54am
Rating: 7.0  / 10.0
this is the type of manga you should read if after reading a series of hardcore yaoi you get fed up and want a change of scene, it doesn't have any drama by the way. This could be what you call a 'vanilla' type of yaoi. Give it a try if you're not particularly picky for a yaoi read

I wish the first story was more like how I perceived the cover to be.
Was this comment useful?  Yes

Pretty good but too short.
by fufufuyen
June 27th, 2013, 1:33pm
Rating: 8.0  / 10.0
I love Hazumi in every way. He's awkward but he has this type of exoticism to him; I kind of understand why Kakuno loves him and I think it's a legitimate reason. Especially when he started going on about the facial expressions; I really loved his descriptions and observations on Hazumi. They're utterly incompatible yet they're so good for one another. I also like Hazumi's reason to love Kakuno and how they began. Hazumi is like this cute, socially awkward kid, but he has this perverted side of him that kind of makes me think of Nakamura from Aku no Hana (without the crazy bullshit). Wish they continued the first story; I'm not liking where the second story's going...pretty good drawings for the most part.

The second story <3
by MirayAllen
May 17th, 2013, 4:01pm
Rating: 8.5  / 10.0
Edit The second part of the manga is really the best one, in my humble opinion. The plot was definitely original, more so the following times I read it, as curious as it sounds. It is, of course, too short to excel in every possible way--although it does in some particular domains, to be fair--but overall it is quite well executed and what one may assume to be its flaws turned out to be the story's strengths, I thought. For instance, we are given close to zero background concerning Shirou-san, but then again I think the ambiguous hints at it strengthened the plot as a whole, conveyed a little more substance to this unconventional- almost eccentric- relationship. This makes no sense, I'm afraid.

Of course there's also something to be said about the artist's style. As concerns the art, I gave in long ago to Kiyo Kozumi-sensei. I wish there was more than two short mangas from her, but still I lost count to how many times I've returned to them on the sake of the art alone. It's different from everything else out there. The storytelling is almost gracious sometimes--e.g. how Nao-chan conveys his conflicted thoughts through lingering moments of silence. And really now, the main characters are complete opposites. How did she manage to make me root for them so? I loved Nao-chan from the very first second I set my eyes on him, but Shirou-san too had the most compelling personality. Random, erratic, visibly unstable, absolutely grotesque, unbalanced, anxious--the list goes on forever. Not to mention his sexual ambiguity (and I loved their scene in the bathtub: random, classy, funny, superior).

The first story is perfectly fine as well, although I found the characters from the second one easier to relate to and overall more interesting. They are both worthy, of course.

PS: So, I'll ask you over to watch some variety show and then I'll just leave you in the room alone so you can enjoy it properly. Sounds legit.

Amusing
by Chryza
August 28th, 2012, 12:54am
Rating: N/A
Protagonist Hazumi is interesting in how detached and socially awkward he can be. His love interest Kakuno isn't exempt, as some of Kakuno's responses give him a sort of peculiarity as well. Hazumi makes every interaction slightly odd, but this turns out to give the couple an almost endearing awkwardness. It's hard to explain, but in the end the first few chapters are cute as well as hilarious in their own way. There is a definite style to the work, in both art and storytelling.