Login to add items to your list, keep track of your progress, and rate series!
Description
A scholar who failed the national exams is picked up by a martial arts master and given the task to record his life into a book. Through their journey, Son Bin meets many great people and soon finds himself following the same path as the master, as the Martial Arts King. 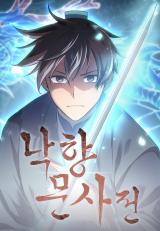 
Category Recommendations
Wo You Jiu Ge Nu Tudi
6 Worlds of Cultivation
Muinnigwak
The Husky and His White Cat Shizun (Novel)
Princess to the Rescue!

WTF happened with season 2?
by Gottesurteil
September 28th, 2021, 3:00pm
Rating: 10.0  / 10.0
Did both the artist and author change? The MC's character design changed notably between chapters 63 and 64, which is really bad considering there's no time skip. It's literally a matter of second (season 1 didn't have a climax, it just paused mid scene).

Also, the MC himself has drastically changed... he used to be intelligent and frankly one of the greatest MCs in the genre. I.. really don't know what happened during the 3 month break between seasons, but this went from top-tier to near droppable.

Slow but not
by Helbrassen
September 19th, 2021, 4:48pm
Rating: 10.0  / 10.0
The manga has a Story that moves forward in a good pace and is engaging and interesting: The manga is slow in showing the main characters growth, this is good in my opinion since there are to many Weak to Strong mangas out there that makes the main character go from weak to strong in just a few chapters, i'm currently on chapter 29 and the main character isn't strong yet but you are able to seem him improve and grasp the concept of the martial arts hes been observing.

A fresh take on murim stories.
by Psy472
February 7th, 2021, 7:55pm
Rating: N/A
A scholar with no experience in martial arts, due to coincidence was employed to record the life of a master martial artists like the intro said. However, if you read beyond that simple intro, you will see a complex hidden plots and relationships among characters. Our MC may not be a simple scholar as he appears. The pace is relaxed, the character development intricate, and the action is good.
Was this comment useful?  Yes

The meaning of being a martial artist
by Samken
December 28th, 2020, 10:30pm
Rating: 9.0  / 10.0
Name is as it implies, a Failed Scholar is recruited by a Martial Arts Master to follow him around on the intent of writing his will/biography to leave it for future generations, this, in turn, changes the scholar as well since he needs to understand what it means to be a martial artist to make sense of what the martial arts master wants to leave it behind.

This takes a more physiological approach on what it means to be a martial artist then it's current peers, highly recommended.
Was this comment useful?  Yes

A poetic take on the martial arts genre
by OneTruePancake
December 23rd, 2020, 6:09pm
Rating: 8.0  / 10.0
This story is about a scribe who follows a middle aged martial artist and writes his biography. It revolves around their interactions and conversations about the abstract ideas of martial arts. An engaging read that has amazing art and battle scenes. I personally found it to be less cliche than other reads in that the main character is also watching along side the reader.
Was this comment useful?  Yes