Login to add items to your list, keep track of your progress, and rate series!
Description
Yuusuke and Atsushi are brothers by their parents remarriage. They haven't seen each other since Yuusuke moved to Tokyo for university. And now Atsushi is doing the same, moving in with Yuusuke for his university studies.

Three years can bring a lot of changes in someone. Atsushi has matured, gotten taller and also much colder. How will Yuusuke bridged the distance that have grown? 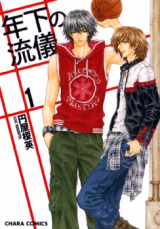 Urmm...
by FlameKeeper
May 14th, 2016, 1:55am
Rating: 6.0  / 10.0
Like everyone else, I'd admit that this manga started off well but was a total disappointment later on. The mangaka threw in too much drama and you don't know what exactly the characters really want. I don't really like the idea of a love rival being the only hurdle in a romance manga. There's a lot many other things that the mangaka could use. Aside from that, the plot went around in circles.

I'd say that the first volume was good, the second was almost tolerable and I couldn't stop myself from
skipping pages when I reached the third. The art is beautiful so here goes a 6! ^
Was this comment useful?  Yes

Confused but i like it.
by Himitsu-chan
November 3rd, 2015, 5:32pm
Rating: N/A
I like it but i'm confused. The start is good, there is a chemistry between them but as the story progress their simple problem just keep on stretching to the point that it seems they can't solve it anymore, and the hell with the ending, they suddenly get back together i didn't even know what happened because before they get back together the uke seems to still suppress his feelings for the seme's sake then at the last chapter viola! They reconcile. Oh well that's it? But i still like the story, the art is also good.
Was this comment useful?  Yes

Trolled
by mashimaro12345
September 5th, 2014, 11:01am
Rating: 6.8  / 10.0
Finished three volumes and I got the feelings that I got trolled by the author. What on earth, really.
The story started off awfully well, both Yuusuke and Atsushi seemed to know what they wanted. The author gave the impression that the characters are confident and would do anything for their love.
That's how a yaoi manga is supposed to be. A seme is supposed to do his job, sweep the uke off his feet and make it seem as though everything else does not matter while the uke is supposed to respond to it.
But not here.
In fact, we're thrusted into a world of drama but not quite like it (you'll probably understand what I mean after reading it), wishy washy characters, not knowing what they want and characters that keep going back and forth. Just when you think you see some progress between the two of them, things get reversed in the next chapter as if previous chapters that made progress were a mistake. Yuusuke will suddenly backtrack to where he was while Atsushi will then be left hanging. Meanwhile, Atsushi didn't seem to have enough guts to get Yuusuke, did not seem interested enough to abandon everything just to obtain Yuusuke. He gave in too easily to things that hindered him, did not seem to have thoughts of his own and it was as if Yuusuke was the commander and the one and only who could command his actions and feelings. He did not pursue for his love enough just because of few things that upset him. A poor seme.
Things were good until half of volume 2, then things became complicated. Not because there's any serious issues going on, but because the author complicated them. Back and forth, back and forth until the last chapter. The whole of volume three except its last chapter is a waste of time and effort.
Instead of focusing on the issue, the author seemed to be more into providing fan service (no complaint there, such as how others seemed to be easily attracted to Yuusuke and things like the washroom scene). They're alright, but if the author just settled on focusing on the two of them more and provide more scenes of them together I think that will be better. They should have gotten together by end of volume one / half of volume 2 and focused on Ito falling for Yuusuke next. Instead, I've no idea what the heck happened all the while. Things got mixed up unnecessarily.
And suddenly, in the ending, there seemed to be some miraculous character progression to the point that I've no idea what they're thinking. The answer that they were searching for was just in front of them. All Yuusuke had to do was go for Atsushi and that's it. NO need to prolong it to three volumes long. Things got poorer when the author failed to communicate what the characters are thinking to the readers. One minute they're saying this yet the next they changed their mind and goes to the opposite direction.
I've always been happy if there are more chapters available but if it's just going to be filled with unnecessary things then things should be cut short.
So. Why this rating? Because the art is to die for and it had a good plot in the beginning. Half of it was good while the other half was just a downfall.
Was this comment useful?  Yes

Boring and Unrealistic
by hotarusasaki
June 21st, 2014, 3:25am
Rating: 5.0  / 10.0
The only thing good about this manga I suppose was it's art and that the characters looked cool. Disliked everything else and was happy when I finally finished it and could stop reading such bad plot.
Was this comment useful?  Yes

Uh???
by jaydenmel13
November 13th, 2013, 2:11pm
Rating: N/A
Well, I saw the whole thing and I wasn't feeling anything. Usually this mangaka's work is good and very nice drawing and all, but this story is quite too long to tell. It's always going back and forth and really annoying. It is quite disappointing because I always look forward on this mangaka's work.
Was this comment useful?  Yes

good drama build up
by torride
September 4th, 2013, 10:19am
Rating: 7.9  / 10.0
very good build up but ending is abrupt, the drama was good but the ending felt like the author had to rush things and packed the conclusion in one chapter without tying the loose ends nicely.
Was this comment useful?  Yes

Too long
by bottledwater
August 20th, 2013, 7:00pm
Rating: N/A
I don't feel anything between Atsushi and Yuusuke, it felt like all the mangaka did was force them to be together... She didn't convince me why they are in love with each other. And the angst aspect was cheesy as well. Not a good story from her at all. I do enjoy her drawing skills.

Rushed
by mtmt1311
May 12th, 2013, 1:52pm
Rating: 5.0  / 10.0
The whole series, the uke swing back and forth, back and forth. The poor seme keeps waiting and waiting. Not to mention the annoying undeveloped third party. At the very end, the author got tired and let the uke became strong. The story offers no solution, they are still blood-related, risk of scandals, seme doesnt have chance in his basketball career. If anything happened, its just the seme suffered mental breakdown and looked bad in front of the coaches. LOL
Gonna give credit for the art though.
Was this comment useful?  Yes

But contrary to Kinky-chan I felt that the first volume was boring and not even the gorgeous art could keep me interested. So I put it on hold and waited for the whole thing to be translated. I actually had to convince myself to pick it up again.

It got more interesting in the second and third volume.... It's not original by any standards, but it's well developed and it seemed to me that, compared to almost all shounen ai/shoujo manga I've ever read, Yuusuke's acted almost reasonably in that situation (of course he felt hesitant, who wouldn't?) and he wasn't super annoying, moping and crying the whole time.

BUT. The end was a let down. It was like going at full speed and then suddenly stopping.

EDIT: When I look back, I have to lower the rating to 4, because... yeah, it's sub-standard.

Attention future readers...
by MirayAllen
February 16th, 2013, 4:42pm
Rating: 5.0  / 10.0
If you're thinking about reading Toshishita no Ryuugi, I strongly suggest you to download the Nakama+Dangerous Pleasure version [you can find it on their respective homepages]. They are slightly behind -- only up to vol. 2, chap. 7, whereas Lemon Pie Lovers is done with the whole thing already -- but the quality of their translation [and overall feel] is far better. I found the latter's version somewhere online and I assume it's good enough if you're in "just to get the general picture" [in comparison, I found some unpardonable mistakes though], but to get a full grasp of what is going on I would wait for Nakama+DP updates.

Either way the story gets seriously boring and cliché and cheesy and stuck so I wouldn't bother either way. I like the art, but that's not enough.