Login to add items to your list, keep track of your progress, and rate series!
Description
A world of supernatural where strong preys on weak. An Earth not just for humans.....and a strange ability! 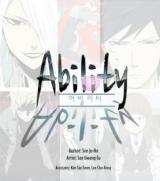 Note: You must be logged in to update information on this page.
Forum Posts Click to view the forum
Did Ability finish?
over 7 years ago
What is the "Ability"?
over 9 years ago

Unlike Noblesse, Ability doesn't have an over powering main character that is always there to save the day. Instead, you have a main character who tries his best with what he has to do what he can for the people around him. He may not always win and he may make mistakes along the way, but through his failures, he will continue to grow.

I personally think that Ability is very well done. Much more so than Noblesse if I say so myself. Though a lot of people complain about the pace, I for one think that it's going at a perfectly fine pace. The problem that people have when they say it's slow pace is they are only reading the Webtoon on a chapter to chapter bases. If you look at the story as a whole, if you reread the story as a whole, the pace will feel perfectly fine for you too. And just because it has less chapter doesn't mean that it is any less better. Don't let things like popularity and ratings affect your opinion of any manga. Read the manga with an open mind and see with your own eyes what that manga is all about. Let yourself be the judge on whether or not a manga is good.

I started reading this because of the good impact it had on the first chapter, and it really did caught my attention until c. 30 or so. The character's interesting as well as the story. but shortly, there showed the INCONCISTENCIES in this webtoon.

1. the MC kept on switching from strong to weak. he doesn't even improve on handling his power! After acquiring one ability (that's yet usefull) he gets another. What's worse it doesn't even help.
2. You can't even call it "slow paced". "Cliff hanger"s more accurate i say. It's like riding a roller coaster at it's peak then suddenly drops.
There's so much more but can't spoil

I wish they would fix these on the next season, the "story"s great but the "plot" ruins it all.
Was this comment useful?  Yes

Authors have created some excellent plot elements in the first season which gives us high hope for the upcoming season. MC's ability is strange, and you would find it interesting & funny at the same time. Sa-Ryun, a supporting character, is one of my favorite character thanks to his unique personality, looks & power. The species in the series are interesting (though few of enemies are pretty generic).

The negative points would be that it is too slow paced at few times (especially between CH10-CH33). It's not like we don't have any good development, but reading it on weekly basis is frustating. The second negative point is MC's attack pattern. It's repetitive and it's always a failure which makes it frustating. Though on the bright side after few moments of frustation we see good action & some cool moments by the MC.

I would recommend Ability if you can gulp few slow developments. Believe me otherwise it's good.
Was this comment useful?  Yes

Feels like Noblesse...
by YukikoKudo
January 29th, 2014, 2:32pm
Rating: N/A
This entire manga just reminds me about all the stuff I don't like about Noblesse, and contains very few elements of stuff I do like about it.

I really enjoyed Noblesse for its humor, its characters, and interesting plot (in the beginning). But since then, the story has just been battle after battle with the same pattern over and over again.
Spoiler (mouse over to view)
With weaker characters getting defeated, and Rai stepping in, demolishing the enemy, and then coughing blood.
It's the same pattern in this manga, except the main character is a punch-bag zombie. All the fight scenes are essentially identical (random flurries of punches, main character falls, gets up again, repeat ad infinitum).

The characters even draw parallels to those in Noblesse. Un = Regis. Ye-Rin = Seira. With similar personalities too...

That said, I do like the humor, but that doesn't make up for all the fight scenes that just happen in the exact same manner... Overall, looking forward to progressions in the plot, but please please, mix up the fight scenes.
Was this comment useful?  Yes

It's not good in all honesty...
by nakie08
January 22nd, 2014, 5:53pm
Rating: N/A
Intangible story, incredibly cliched MC, very slow pacing, lacking art(it's nice but not geared for action), poorly executed dialogue and flat jokes. It feels like the authors are just winging it and not planning anything ahead at all. Ofcourse there are several authors who can do that and maintain an interesting series. Sadly, this manhwa's authors are not one of them. Story-wise, this series has nothing against TOG. And yes, I read all the released chapters first before commenting.

Since it's still ongoing, there may be hope for this yet, but for the story to progress SO LITTLE in 60 chapters I really doubt it.
Was this comment useful?  Yes

I wouldn't judge it so early..
by DaSauceBaws
January 15th, 2014, 11:19am
Rating: 8.0  / 10.0
Lets face it, the authors like to start out slowly. Look at Noblesse, to me the first 60-70 chapters were somewhere between "meh" and "eeeh", but then the authors picked up and now noblesse is one of the best web-comics around (my point of view). The same WILL happen to this story. If you are impatient, I'd recommend you to stay away from this for a while - at least until the story reaches 100-200 chapters.

IF there is one thing that could have been done better, it would probably be the design of some characters. I mean sometimes I'm not sure whether it's a man or a woman (lol). I also don't know how I feel about the UltraJesus MC, but it doesn't bother me that much,

Waste of time
by RoxFlowz
January 13th, 2014, 12:01am
Rating: 3.0  / 10.0
I can't believe I've endured this title for such a long time. Just like most others I've started to read this series because it's from the Noblesse authors, hence I expected a story of similar quality. And it's the sole reason I read more than 50 chapters of this before finally deciding to drop it.
We have our absolutely kind, angel-like mc mr. nice guy, drawn into the world of anothers, monsters hiding among humans. But since his character doesn't make him interesting enough, he's equipped with a hidden power he's completely oblivious of.

Besides the artist not being too great at drawing fighting scenes (it's all martial arts, so it's really noticeable), the fights are extremely repetitive. Mc vs. random evil guy -> mc gets knocked down -> stands up -> repeat 50x -> mc activates superpower and wins or he gets help.
I may exaggerate at some points (besides the fights, they really are like that), but I can only say this much: It does NOT get better. If you've read 10 chapters and you think it's good, fine. If you still hope it will get better, give up.

kek
by wr4ith0
December 19th, 2013, 11:24pm
Rating: N/A
not bad. Another solid manhwa title that you don't have to feel too guilty about reading online, since it was originally free. Not as beautiful as Kisswood, but stands tall among the likes of Tower of God and Trace
Was this comment useful?  Yes

I think the most interesting part of this manhwa is Sa-Ryun and his interaction with the lead, Yu-Hwa. Otherwise, the story isn't particularly outstanding... Hopefully, not for long.
Was this comment useful?  Yes

hmm . . .
by pandasamurai
November 19th, 2012, 7:05am
Rating: 10.0  / 10.0
From the makers of Noblesse, I can definitely see lots of potential in this . . .
The characters seem interesting, and it's only a matter of time before the plot gets rolling. I am confident this'll definitely become one of my most lookforward to series.
Was this comment useful?  Yes