Login to add items to your list, keep track of your progress, and rate series!
Description
The youngest A-rank adventurer, child prodigy Kaiser, finds three babies who were the only survivor of a destroyed village. Then he decided to give up his job as an adventurer and raise them. Over time, the girls grow brightly and show exceptional talents in fencing, magic and management. However, these girls also seem to love their father, Kaiser! 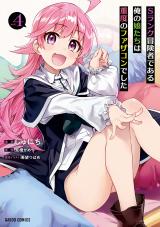 It goes as follows, main mc finds some cute little girls when he was in his teenage years, 15 years later they got older and became reappy famous in tehir respective field.

Really looking forward to it in the future how it when the girls get more loveydovey with the mc.
Was this comment useful?  Yes

Extremely Creepy
by Helbrassen
March 14th, 2021, 6:06am
Rating: 1.0  / 10.0
Like the description reveals the main character finds 3 baby girls and adopts them, but just like the description also says they seem to be way to "in love" with their adoptive father, this is very creepy and i could understand if it was an average childhood crush like most girls want to marry their dad at that age but it seems a little more dangerous and not at all wholesome like that.

I think theses girls are like age 11 to a max of 14, their height is about up to the waist of their father in one image so i guess it's younger than 14 most likely, still very young, the worst part is that there are Ecchi images of them at this age... who is this manga for? pedos? wtf.

At this point i have given up on the manga and story so i just blaze through pages without reading them to see what happens later, so 4 years later they're most likely 16-18 years old now i think, they sleep in the same bed "no sex though" and they bather together... ffs i guess it's less creepy since they're older now and have more agency but i kind of feel like this is a form of grooming.

Past chapter 8 the manga seem to reduce the Ecchi but i can't say anything past chapter 9 since that's when i stopped... such a freaking weird/creepy premise.
Was this comment useful?  Yes