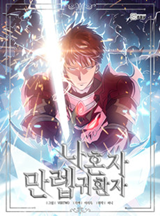 They have no personality other than protect XYZ, get power, and look cool all while being the epitome of dicksh protagonist you're supposed to root for. The other characters around them are equally boring, and their strength is completely contrived to be inherently better than everyone else, but no where near the MC, because that's the entire plot in a nutshell.

There are better written manga that this is an imitation of. There are better drawn manwha that this is an imitation of. There is especially bad because it takes not risks, and lack anything creative enough to be considered interesting. It's an early puberty power trip, written in a manner that feels like the kind of story a child would make up to tell his friends to show how cool he is to them. Some character designs are interesting at least, but most feel vague and generic, This is the ONLY good thing I really can say. They barely show up at point i've read up to, maybe they get more spotlight later on? The Main character is included in being incredibly generic, bizarrely enough. His entire design is just not that interesting, it lacks any real flare, or drawing component to make it stand out.

Perhaps it gets better, I dropped it early. It's too bland for me to bother looking up the chapter for this review.
A story should be able to sell itself in the first 3-5 chapters, and this certainly didn't.

3/10, occasional good character design, and didn't do anything wrong, but by virtue of taking no risk.
Was this comment useful?  Yes